How To Stop Cichlid Aggression – 13 Proven Methods To Try! 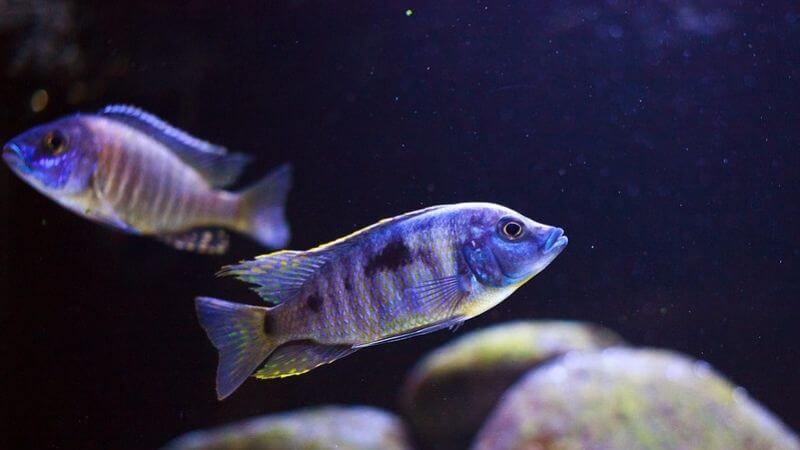 With over 2000 species discovered, cichlids are immensely popular among hobbyists and experts. Besides their striking appearance, they’re known for one more thing– their sassy personality. Have your cichlids been fighting lately? Are they showing hostility towards other fish?

Naturally, cichlids are aggressive as it is their innate nature to be so. Evolution reveals that their aggressiveness has been a primal factor in their survival. So then, how can one keep them in a community tank where there are all sorts of fish cohabitating?

How To Stop Cichlid Aggression?

Cichlids are notorious for their complex hierarchy and bad temper. To control their aggression in a tank setting, you need to get a bigger tank and ensure enough space first. Next, you can try methods like controlled overcrowding, using a scapegoat fish, changing the tank’s layout frequently, and removing the aggressive fish.

Here we have listed 13 reasons why cichlids get aggressive and how to control it. Keep reading to know!

First Get A Bigger Tank

A bigger tank means more territory for cichlids to mark. Large tanks will provide your cichlids with enough space to claim their area and tolerate the presence of tankmates. Usually, small tanks are the reason cichlids get aggressive as they are incredibly territorial.

A minimum of 45 gallons is recommended for cichlids that are up to 6 inches. However, an adult African cichlid can grow up to 8 inches. So you need to get a 55-gallon tank to accommodate your cichlid.

Though it will cost you more buying a bigger tank upfront, you will have more room for expansion if you add more fish.

If you pair a single fish with a cichlid, it will definitely be harassed relentlessly. This is because cichlids want to show dominance and will target other tank mates. But if you have more fish in the tank, the cichlid will not single out and harass a single fish. Instead, more fishes will divide the cichlid’s attention and will eventually calm him.

However, you shouldn’t overcrowd your tank as it will lead to more competition for food and territory.

Controlled overcrowding is what you will be needing for aggressive cichlid tanks.

But a controlled overcrowded tank comes with quite a few shortcomings. You will have a hard time keeping the tank clean as a lot of bioloads will be produced.

You will have to keep dual filters and change water frequently to maintain optimum water parameters.

Do Not Add A Single Cichlid In A Cichlid-Only Tank

As I mentioned earlier, cichlids have a hierarchy in their school. And when you add a new cichlid to an already established order, all other cichlids will divert their attention to the single newcomer.

The newcomer will have no chance of standing up against the legions of cichlids.

So adding multiple cichlids at once will divert other old cichlids’ aggression from a single target.

Due to their territorial nature, your dominant cichlid will mark anything from plants and decors to pebbles as theirs. And when other tankmates approach these areas, the cichlid will get aggressive and start nipping on their fins.

So, to stop the cichlid from marking its territories, it is better to have minimal plants and decorations in the tank.

Move The Substrates And Decors Frequently

If you do not like an empty tank and have decors and plants in place, there’s a way to stop your cichlid from marking territory.

Cichlids often show dominance by marking pebbles and decors. They will stick to rocks and pebbles as their stronghold. So, you need to break this stronghold by relocating the marked object to some other place.

Once you see your cichlid is being too hostile to other tank mates while upholding his territory, you need to immediately switch his marked monument.

Another way to manage your cichlid’s aggression is by putting only males in the tank. This way, they will have no females to fight over. Cichlids show aggressiveness and dominance when there’s a potential mate in a group of male cichlids.

Or, you can put three female cichlids per one male. This way, the male cichlids will not be fighting to show dominance as they will each have a prospective partner to mate with.

Female cichlids can also be aggressive when there are babies and eggs involved. They will be overprotective to let anybody enter the territory.

So, other inquisitive tank mates could be harmed if they enter the areas where females lay their eggs.

They do not even let their partner come and visit these spots. So once you find that your cichlids are pregnant, you need to relocate them to a separate tank and bring them back only after the eggs hatch.

When your cichlids aren’t getting enough food, it is normal to be aggressive and fight for a bigger share. But, especially when the food falls into the periphery of a boss cichlid, he won’t hesitate to gnaw other fishes’ fins for coming over to his territory.

So, you need to feed them frequently and in abundance. I am not implying that you should overfeed, but cichlids are voracious eaters and have a great appetite.

Usually, it is recommended to feed them twice a day. Also, you should give more food at night because of the large interval between their eating hours.

Separate The Aggressive One From The Group

Generally, every cichlid tank has a tank boss who bullies every other cichlid. He will be the first one to mark territory or invade others’ territory on his will. So, if this boss is getting more aggressive and is causing harm to other cichlids, you can take him out and put him in a separate tank.

Put him there for a few days till you see another tank boss rising through the ranks in your main aquarium. Once the hierarchy is set in the tank, you can put the aggressive cichlid back to the tank. He is now no longer the dominant fish in the aquarium and will fall back in line.

Meanwhile, you can only wish that the new boss fish in line won’t turn out to be as aggressive as the last one.

It is hard to let your fish go, but if by any means the aggressive cichlid isn’t being tamed, there is seldom an option other than letting him go.

Cichlids With Similar Patterns Are Danger To Each Other

Aquarists recommend not keeping similar-looking cichlids in the same tank. For example, suppose you are putting two cichlids with similar colors and patterns. In that case, both of them will be extremely hostile towards each other.

Aggression has always been centered on the members of the same species. It’s a well-known phenomenon in the animal kingdom.

A cichlid will immediately recognize the cichlid of its own species. So, naturally, this will lead to animosity for securing prospective mating partners and food.

However, this doesn’t mean that cichlid is a solitary fish. On the contrary, cichlids are social fish and like to live in groups. The only thing that makes them aggressive is their hierarchy.

Every male cichlid wants to show dominance over a school. So to settle this dispute of who lies at the top of the hierarchy, they often exhibit signs of aggression.

They will settle their social disputes and resolve their hierarchy by displaying aggression. So be very careful when selecting the species to go into your cichlid tank. For instance, at all costs, make sure to avoid keeping males that come from the same species or look similar to each other.

Target fish is the scapegoat kept in the tank to attract the aggressive cichlids’ attention and make them chase after him. These target fish are faster than the cichlids, which makes them hard to catch.

They are cheaper than cichlids, making them expendable fish. Aggressive cichlids will try to catch these target fish and vent their energy until they are exhausted and no longer pursue them.

Some examples of such target fish are Zebra Danios and Australian Rainbowfish. They are adaptive and can thrive in the same water parameters as cichlids.

Even more, they will breed quite quickly despite danger lurking behind them at all times.

Why Do Cichlids Get Aggressive? Why Are They Attacking Each Other?

Aggression is rooted in cichlids. It’s reflexive and native for them. Common reasons behind their anger are territorial disputes, mating frustration, protection for young ones, and lack of resources.

Cichlids are territorial and will turn aggressive when other fish come into their territory. If other tank mates enter their premises, then they will immediately turn to them as offenders. They will try to nib these fishes’ fins till they are out of their territory.

Cichlids Get Aggressive During Mating Season

Cichlids, especially males, show aggressive nature before they can curry favor with female cichlids. So the male will bully fish to impress the prospective partner.

Cichlids also tend to be aggressive when they are copulating. Mating is a pious act for them, and they do not like when other tank mates disrupt their intimate moment.

So anyone who comes nearby while in the act will indeed be chased by both male and female cichlids.

Cichlids have a high protective tendency towards their offspring. In the wild, cichlids have to protect their eggs from legions of predators, so they will naturally bring out their innate nature of aggressiveness in the tank as well.

Their aggression helps them effectively fend off any jaywalkers in their territory.

So if you have a pregnant cichlid in your tank, it is better to keep her in a separate tank. Female cichlids will become so aggressive that they won’t hesitate to attack even their own mate.

They will not let anybody come near its eggs and fry.

Cichlids Get Angry When There’s A Shortage Of Food

Whenever there’s competition for food, cichlids will be the first ones to attack other fishes. Dominance is their second nature, and when it comes to food, they will not stop.

Conclusion: How To Stop Cichlid Aggression

For cichlids, aggression is a force of habit. They don’t need a reason too big to lash out on fellow tank mates and even bully them to death on many occasions. Thus, it’s important to pair them with the right fish, in addition to understanding their needs and taking care of them accordingly. From the tank’s size to choosing the suitable scapegoat, several tried and tested methods are listed above. We hope you will find them helpful!