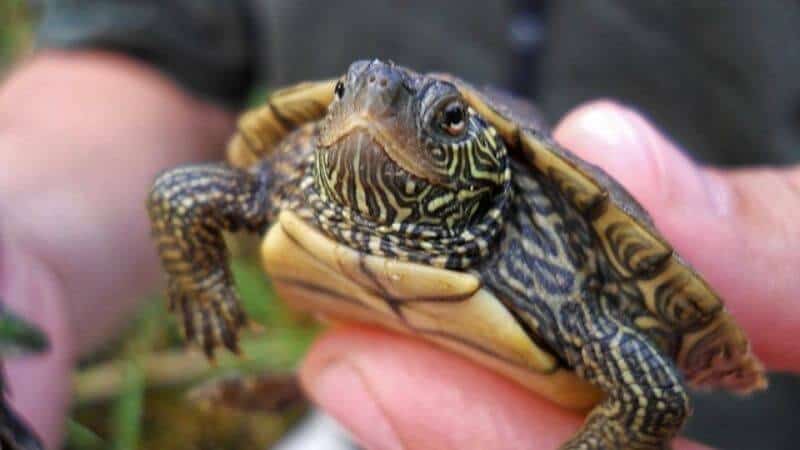 A subspecies of both land and water, the Mississippi map turtle is immensely popular among turtle keepers like you and me. And if you have been raising these turtles and yet do not know their gender, it’s time you figure out.

Even though male Mississippi turtles are smaller than females, their tails and claws are thicker and longer. If you closely look at their plastron, it’s concave in males and flat in females.

The female Mississippi map turtles are more giant than their male counterparts. Females can grow from 5 to 10 inches, whereas males reach only up to 5 inches. At a glance, you will notice females being bulkier than males.

Female Mississippi map turtles can weigh anywhere from 2.42 lbs. to 4lbs, and males weigh about 3lbs.

Likewise, males reach maturity at about 4-6 years, whereas females take around 8 years.

So if you have two turtles of the same age and one is distinctly bigger than the other, the bigger one is probably a female Mississippi map turtle.

But do not use this as the only factor for distinguishing male and female map turtles. Captive male Mississippi turtles too get large if adequately fed.

Females Have Flat Plastron, And Males Have Concave Plastron.

You can check your Mississippi turtle’s plastron to know whether it is male or female. The plastron is the bottom shell section that protects your turtle’s belly.

Before checking your turtle’s plastron, make your turtle comfortable first. Pick your turtle from the end region of its shell. This way, its mouth will not reach your hands even when it’s agitated.

Flip your turtle and check its plastron.

Male turtles have concave plastrons, whereas females have flat-lined plastrons. The concave shape helps a male fit over a female’s cloaca during mating.

Females have flat plastrons used for storing eggs during pregnancy. So, you can also differentiate the sex of your Mississippi map turtle by checking the shape of the plastron.

Tail Notch Is Wider In Males.

Another way to check whether you have a male or female Mississippi turtle is by checking the tail notch.

I have found that many informational blogs have been stating wrong facts on this factor, i.e., females having a wider-shaped notch, but this isn’t true.

So if the notch is wider, you have a male turtle, and a smaller notch means female.

However, you might not notice this difference if your turtles haven’t reached maturity. So, this basis of difference cannot be held accountable in the case of baby Mississippi turtles.

Position Of Cloaca Is Different.

The cloaca is an essential organ in a turtle’s body. It performs both reproductive and excretory functions in turtles. However, they lie in different areas in Mississippi turtles. In fact, it’s true for all turtles.

Males have cloaca positioned externally in the middle area of their tail, whereas it is positioned at the base of the tail in females. So if your turtle’s a male Mississippi turtle, you will notice a section – like a part that’s been cut by a knife.

The external positioning of the cloaca helps males in thrusting their penis into the female’s cloaca.

And the females’ position of cloaca at the base helps them store and lay eggs. As females have to lay eggs through their cloaca, they have larger cloaca than males. On the contrary, males have their penis hid inside their cloaca, which is smaller in comparison to females’, who use it for laying eggs.

Males have longer and sharper claws than female Mississippi turtles. Males with longer claws have more prospects of getting a suitable mate when there’s competition around. These elongated claws are used for climbing on top of a female’s carapace during mating.

This distinction in nails only shows up when your turtles reach sexual maturity. Nonetheless, they help you differentiate male and female Mississippi turtles in your tank.

Differences In Behavior Can Also Be Counted As Factor.

If you have more than one turtle in your tank, it will be easier to tell the difference by their behavior. For example, male turtles often chase female turtles to mate – so they pursue females until they are thoroughly impressed.

Other pointers like changes in feeding habits can also distinguish male and female Mississippi turtles. For example, adult turtles favor eating veggies and plants, whereas females, when pregnant, will be consuming a more protein-enriched diet like insects and blood worms.

You should never jump to a conclusion based on one particular difference factor, especially if you have baby turtles. It can be tough to deduce the physical differences at this stage because these factors only become distinct when your turtle grows into an adult. Nonetheless, you will be able to see some subtle differences.

As for adults, look for plastron, tail, claw, and cloacal position to get a verdict on your Mississippi map turtles’ gender.

How To Tell If A Baby Mississippi Map Turtle Is Male Or Female?

Conclusion On How To Tell If A Mississippi Map Turtle Is Male Or Female.

It is uncertain to tell the difference between male and female Mississippi map turtles in the early stages. But as they reach maturity, you will be able to notice differences quickly.

Shell size and claw differences, along with clear visibility of cloaca, will help identify both males and females. However, you shouldn’t jump to conclusions as considering a single factor will not be enough to differentiate between male and female Mississippi map turtles.