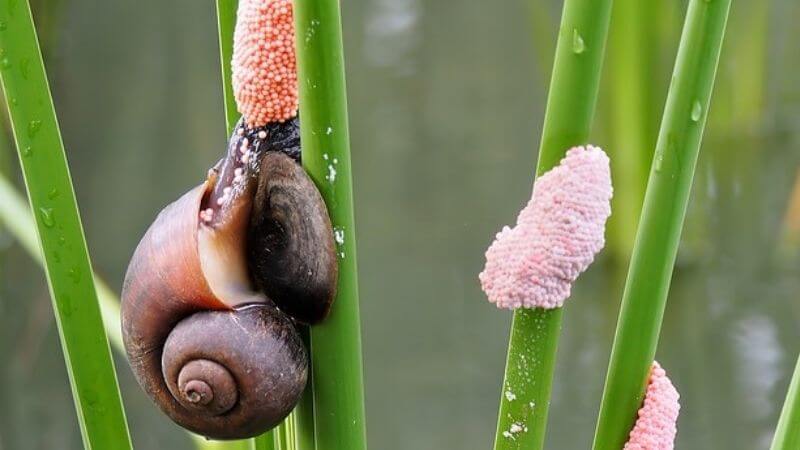 There are species of snails that give direct birth, whereas some lay eggs. But worry not; signs of pregnancy can be identified in both.

The telltale sign of a pregnant snail is eggs filled in its genital tubes. If the tube is filled with translucent eggs, the snail is pregnant.

How To Check Genital Tube?

Gently, pick your snail and have her face towards you. You will notice the genital tube on the left side of her body. If your snail is pregnant, you will notice tiny orb-like eggs sticking against one another.

How To Tell If A Livebearing Snail Is Pregnant?

You will see the formation of brood pouches of eggs inside the genital tube. These embryos develop into young snails, which mostly hatch during the night.

Viviparous snails (livebearers) bury themselves in the substrate until they deem it is the right time to let out the babies.

So, if your snail has buried itself under the substrate or is busy digging, it could be a sign of pregnancy. And it will be better to leave it alone.

Other Signs Of Pregnancy

Like the Malaysian trumpet snails, some live-bearing snails reach sexual maturity when they are about 0.3 inches long.

However, they are considered fully matured when they are 0.8 inches. These snails can grow rapidly: 0.1 inches a month. Thus, they should reach maturity quickly.

The age of sexual maturity varies per the snail species. For example, some can lay eggs when they are 6 weeks old, while some larger species can take about 5 years.

So, know your snail’s species and when it will lay its eggs.

I’ve laid down some common pet snails and the age they have to reach to lay eggs.

Snails usually mate in the late spring or early summer. And if the climate is hot, they will mate even a couple of times a year.

For example, garden snails tend to bear offspring all year round if the weather is favorable.

Snails find water temperature between 70 to 85 degrees Fahrenheit to be the most suitable for mating.

Reproduction Process In A Snail

The reproduction system for a snail differs from species to species.

However, most snails are hermaphrodites. This means they possess both male and female reproductive organs.

But still, these snails need partners to fertilize each other. So, they will simultaneously inseminate each other – meaning, both of them can get pregnant at the same time.

And there are some hermaphrodite snails who take turns playing roles. To put it weirdly, a snail can perform the function of male one season and female the next season.

As for snails with distinct sex, they tend to have different male and female reproductive organs.

Land snails show courtship to attract potential mates by expelling chemicals from their bodies. After finding their match, they will indulge themselves in intercourse which lasts about a couple of hours to a day.

During copulation, the sperm transfer to one another, and fertilization of the eggs occurs.

Despite being hermaphrodites, most snails cannot reproduce on their own, like in parthenogenesis. Instead, they need partners to fertilize their eggs.

A single snail carries about 60 to 100 eggs in its genital tube. Some species of snails can carry up to 400 eggs at a time.

Unlike freshwater snails, land snails build nests on the ground. After finding a moist place, easy enough to dig, they will bore a 2 to 3 inches deep hole.

After laying eggs in that hole, they will surround it with a viscous layer to protect their eggs.

It usually takes about 4 to 6 weeks for the eggs to hatch.

Most freshwater snails have distinct sexes. They fertilize from direct coition. After the intercourse, the females search for a clean substrate such as rocks, logs, or aquatic vegetation to attach their eggs to.

They will firmly affix the eggs in clutches. Some species tend to lay discrete clutches of eggs over two to three months.

Viviparous snails, like the Malaysian trumpet snails, grow their hatchlings inside their special pouch. They come out only after feeding for a few weeks. They are about 0.2 inches long when they crawl outside their mother’s body.

How Long Do Snails Get Pregnant?

Snails can store male sperm for months. So, it is hard to predict how long or when the snail will become pregnant. However, in most cases, a snail will lay eggs after 3 to 6 days from the mating day.

When Do The Eggs Hatch?

The eggs, or clutches, hatch after two to five weeks. It shouldn’t take any longer than five weeks. Eggs that do not hatch even after five weeks should be discarded as infertile.

The appearance of a snail’s egg differs from species to species. They even look like fish eggs. Snail eggs are found in a clutch, which looks like jelly blobs, held together by a transparent sac.

Some freshwater snails attach their eggs above the waterline, whereas some lay inside the water.

Suppose your snail has laid eggs above the waterline. In that case, you need to monitor regularly and ensure the moisture level in the tank.

How Many Eggs Do Snails Lay At One Time?

Snails lay about 60 to 100 eggs. Some species lay at once, while others lay for two to three months.

Why Is My Snail Not Getting Pregnant?

Factors like the water parameters, terrarium setup, diet, and copulation between different species could play a role in a snail not getting pregnant.

Another factor can be the wrong identification of the genders. For a beginner’s eyes, it will be hard to spot the difference between males and females.

How To Tell If A Mystery Snail Is Pregnant?

Mystery snails lay eggs after two to four weeks of copulation. So, you need to check their genital tube and look for egg formation to know if your snails are pregnant.

How To Tell If A Sea Snail Is Pregnant?

Just like with freshwater snails, you have to check the genital tube of the sea snail to see if they are pregnant. You will notice egg clutches forming inside their translucent bodies.

Final Words On How To Tell If A Snail Is Pregnant

Whenever we discuss snails, the discussion doesn’t always limit to one specific species. There are over 43,000 species of snails.

This is why you need to know the genus of your snail, and only then can you deduce information regarding it.

The same applies here. The terrestrial snail’s reproduction process differs from that of a freshwater snail’s. Even more, most snails are hermaphrodites. This, in turn, demands a different approach to reproduction.

Furthermore, some snails are livebearers who keep hatchlings inside their bodies for weeks.

With these many diverse ways of breeding, snails have always fascinated me. The more I dive in, the more I am in awe.