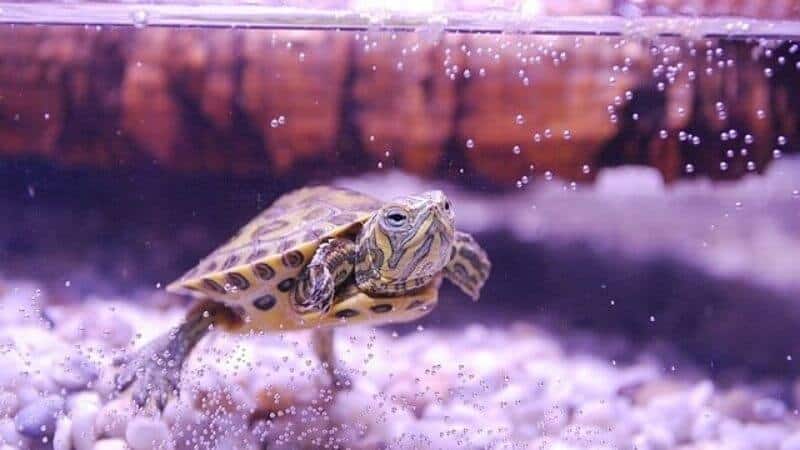 It is important to know the gender of your turtles so you can provide the proper care. A greater population of male yellow-bellied turtles only spells trouble as they fight over the female’s attention. So, in order to maintain the right ratio, you first have to be able to tell if a yellow-bellied turtle is male or female.

So let’s discuss how you can tell the differences.

Although female yellow-bellied turtles are larger than males, the latter have thicker and longer tails and comparatively sharper and elongated claws. In addition, when turned upside down, males’ plastrons are concave-shaped, whereas females have flatter plastrons which provide more space to house eggs.

Here I have dived into details to help you identify whether your yellow-bellied turtle is male or female.

Male yellow-bellied turtles are considered to be adults once their shells reach about 3 inches in length. In contrast, females’ shells have to be about 6 inches.

Females can weigh up to 7 pounds.

So if you have two yellow-bellied turtles of the same age, and there’s a distinct variation in their size, the bigger one would probably be a female.

However, the distinguishing between male and female turtles cannot be based upon size alone. Some male turtles too can get large in captivity under the proper care, and some females have smaller stature than what is considered normal.

So differentiating based on size alone is not enough to tell if a yellow-bellied turtle is male or female.

As turtles get older, the males start developing melanism in their bodies. It is prominently seen in the carapace and plastron region of the shell. As the melanism thickens, it is common for them to completely become black.

Whereas in females, such phenomena are seldom observed.

Females Have Flat Plastron, And Males Have Concave Plastron.

Another pointer to help distinguish sexes in yellow belly turtles is by checking their plastron. The plastron is the bottom shell that presumably protects your turtle’s belly.

Checking plastron requires you to be gentle. Turtles get uncomfortable with rough handling. So, you have to pick them with care. Make sure you hold them from the lower region of their carapace, near the tail.

This way, the turtle will be unable to reach and bite you. Now, slowly flip the turtle, and watch its underside.

Male yellow-bellied turtles have a slightly concave plastron, whereas females’ are flat. The concave plastron helps males to climb over a female’s carapace while mating.

In females, the flat plastron provides more room inside her womb to carry eggs. This is one of the crucial pointers, which helps decide sex differences among yellow-bellied turtles.

Tail Notch Is Wider In Males.

Male Turtles have a wider U-shaped notch at the end of their carapace, where the tail begins.

On the other hand, females have a smaller V-shaped notch.

Shape and Size Of The Tail Are Different.

In contrast to females, males have a thicker and longer tail. In addition, males have a penis located in the middle area of their tails. Females have shorter and thinner tails, starting from the small “V” notch in their carapace’s end.

However, you shouldn’t solely rely on the thickness of the tail to confirm whether your turtles are male or female because age and size may contradict your judgment.

Position Of Cloaca Is Different.

Both males and females have a cloaca. However, male turtles have to thrust their penis into the female’s cloaca, so their cloaca is positioned externally in the middle of their tail.

As for the position of a female’s cloaca, it is situated underneath and at the base of her tail.

The shape of the cloaca also differs depending on the gender of your yellow-bellied turtle. Females have around star-shaped cloaca, whereas males have a small and rounded cloaca.

Evolution suggests the reason behind females having larger cloaca is their need to lay eggs through it. Whereas the cloaca in males is used to cover their penis.

Males Have Larger Claws Than Females.

A quick glimpse of your yellow-bellied slider turtle’s claws can help you to tell a male from a female turtle.

The males have larger, elongated claws, whereas females have shorter claws.

Claws in males are prominent, as they use these to attract their prospective mates. The males will climb on females using their claws during mating, just like mountaineers use an ice axe on an expedition.

Now you know how significant their long nails are for the continuity of their species.

Basking Season For Male And Female Is Different.

It has been found that the male yellow-bellied turtles bask mainly during September and October. This increases their body temperatures and builds up testosterone; thus, increasing sperm count and quality.

Female yellow-bellied turtles, however, bask during May and June. No specific reason has yet been established behind this.

Although I have listed this as one of the differentiators, the basking pattern largely depends upon where you keep your turtles.

Captive turtles might not show such behavior as they are housed in artificial settings. But in the wild, this is a distinct nature of these turtles.

This was first discovered by Michael J. Dreslik, Ph.D., in 1999. He found that the male adult sliders feed more on plants than the females. In the case of females, their stomachs contained more mollusks and freshwater invertebrates than males.

This shows that female yellow-bellied turtles lean towards a carnivorous diet, whereas males eat a more plant-based diet.

It is common for turtles to have a more plant-based diet as they get older. But the reason behind females getting more carnivorous is to fulfill the calcium demands – which is an essential requirement during nesting.

If you are keeping males and females together, you will definitely notice this difference during mating season. The male turtle will start courting and tries his best to impress the female turtle.

He will then come in front of the female, stretch his forelimbs, and display his long claws to show that he is more than capable of climbing her shell. Next, he will try to create water currents with his claws and touch her head. This is an intimate sign from the male, and the consenting female will reciprocate.

After that, she will swim down to the bottom and let the male turtle ride her. The male will use his long claws to hold the female’s shell and hang on to it during mating.

Both the turtles moan and produce sounds that are, in fact, audible to us. This usually takes place for 15 to 20 minutes. And the entire session can take about 45 minutes.

It will be hard for a normal hobbyist to deduce gender in yellow-bellied turtles. It will be even harder if the turtles are just babies. The real distinction can only be recognized when the turtles become adults.

This is when the features which separate their sexes are distinct enough to be noticed. For example, you will notice the differences in claws, head, cloacal position, tail size, and behaviors.

And as you notice these differences, you have to combine several findings. Then only you can reach a conclusion on how to tell if a yellow-bellied turtle is male or female.

How To Tell If A Baby Yellow Bellied Turtle Is Male Or Female?

It will be hard to distinguish sexes when your yellow baby turtles haven’t grown into adults. However, you can make an educated guess by looking at the cloaca’s position.

However, this method isn’t enough to tell apart male and female baby yellow-bellied turtles. It will be better if you ask the breeder or importer – where you got your turtles from. Then, as these baby turtles grow into adults, the distinction will be clear.

Although both male and female yellow-bellied turtles look similar in the juvenile stage, they will show their unique features once they become adults.

Keep a close eye on your turtle’s appearance and behavior. Shell size and shape, along with claws, are some pointers to help you identify male and female yellow-bellied turtles in your tank.

As for age, determining a baby yellow-bellied turtle’s age can be a lot harder than that of an adult. The basic differentiators can also be applied in baby turtles. But if you are still confused about their gender, you need to ask your supplier or the vet.