How To Tell If It Is A Real Amano Shrimp? Know These 4 Imposters 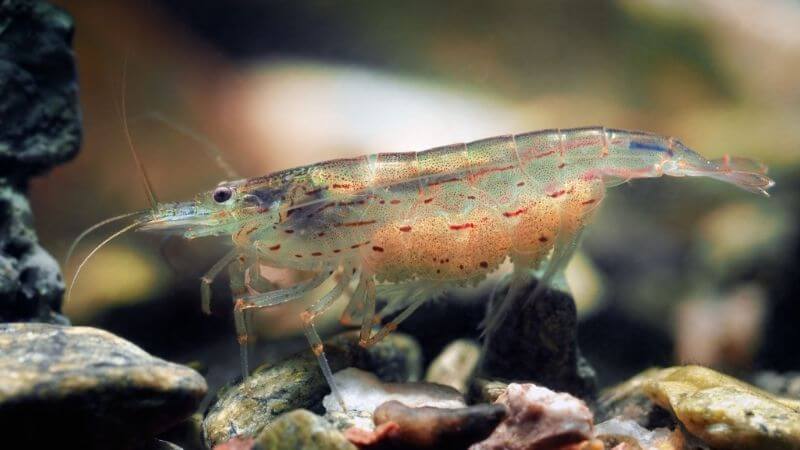 Hailing from Japan and its neighboring island countries, Amano shrimps have unmatched popularity in aquascaping scene across the world. Naturally, several imposter shrimps are sold as Amano shrimps in the market.

Amanos are rare because they’re tough to breed in captivity. This is why you should know the answer to “how to tell if it is a real Amano shrimp?”

Amano shrimp requires brackish water for breeding but cannot thrive there once they outgrow from the larvae stage. This strange growth phenomenon, along with the variation in diet, is why they aren’t readily available in pet shops. Therefore shrimp suppliers are selling imposter shrimp in the name of Amano shrimp.

So, How To Tell If It Is A Real Amano Shrimp?

Real Amano shrimp can be recognized by just looking at its appearance. Amano shrimps have a lucent body with a glass color. They aren’t colorful and have streamlined dots on the dorsal area, stretching from head to tail. These dots, however, come in different colors. The most common dot colors are red, brown, grey, blue, and grey.

Why Is Amano Shrimp So Rare?

The fact that we cannot breed them in a tank and have to be caught in the wild makes them rare yet popular shrimp of choice.  An Amano fry needs to reach freshwater to grow correctly.

Amano shrimps are native to Asian island countries like Japan, Indonesia, and Macau. They are found in freshwater rivers, which mix with the sea. Even though these shrimps thrive in freshwater regions, they require brackish water, or you could say sea, to breed.

And once the baby Amanos turn to larva, they will feed on phytoplankton found in the sea. After feeding vigorously on phytoplankton, they reach the fry stage and will start swimming towards the freshwater region where they originally belong. If the fry cannot reach the freshwater before turning into an adult, the brackish water’s salt content will cause its moist body to become dry, and the fry will die.

An Amano fry needs to reach freshwater to grow correctly. You might know how meticulous the whole rearing process for an amino fry can be in a captive. Therefore, unlike other shrimps found in the market, Amanos are extremely hard to breed in a tank. And this makes them rare and expensive, which increases the chance of buying an imposter shrimp in the name of Amano.

Are Amano Shrimps Found Only In Japan?

Amano shrimp are found not only in Japan but also in other East Asian areas. They are found in Taiwan, Ryukyu Islands, the Philippines, Fiji, and Madagascar.

How Much Does An Amano Shrimp Cost?

You can get a troupe of real Amano shrimp for $30 (A troupe comprising 5 Amanos). Imposter shrimps can be bought for $2 in local pet stores. However, genuine sellers are selling them $6 apiece.

Which Shrimps Look The Same As Amano Shrimp?

Amano shrimps aren’t the only species in the aquatic world to sport translucent bodies. Ghost shrimp, Australian Amanos, Short-nosed shrimp are some shrimps that look similar to original Amano shrimp (Caridina Multidentata) and are often mistaken by many.

Actually, there are over 280 different species of the Caridina genus. These species under Caridina can be found worldwide. Since the genus is the same, most of these shrimp look similar to one another.

These many shrimps under the same genus are also why imposter shrimps often slip into aquarists net and are into pet stores.

In recent times, aquarists are drawing an inference that the Amanos sold in the market are not real Japanese Amanos. In fact, they are the Taiwanese variant.

So if you want to know the difference between a Japonica Amano and a Taiwanese Amano, then here’s how you can tell.

The “Taimanos” are stocky and are shorter than the Japanese Amano. They have a compact rostrum compared to japonica Amanos.

Caridina Multidentata (‘original’ Amano) is a relentless feeder of algae, whereas the Taiwanese variant is lazy and won’t devour much. However, both have similar markings and translucent bodies that make it quite confusing to tell.

Will Amano Shrimps Destroy Plants In Your Aquarium?

No, Amano shrimps do not destroy plants in the aquarium. They feed on the parts of plants that are dying or about to die. They will only feed on decayed portions of the plant and spare healthy parts, like maggots, which feed on the wound.

If you have heard rumors about Amanos destroying plants in your aquarium, there must be other reasons behind the dead plants. Factors like not maintaining water parameters for the aquatic plants could be a culprit. Avid plant-eaters like Goldfish could be next.

So, Amanos aren’t seldom responsible for plants dying in an aquarium.

With over 280 types of shrimp under the Amano genus, one can easily confuse imposters and real Amano shrimp. So, you need to check for the shrimp’s appearance with translucent color and dotted lines on its dorsal.

Also, you need to know that Amanos are a relentless eater of algae. However, the imposter Amano will be lazier than these original Amano shrimps. Price is always an essential factor, and if you are getting Amano for a low price, then most probably, it will be an imposter as original Amanos cost way more than regular shrimps.

Look out for these signs, and you will distinguish real Amano shrimps from the imposters.