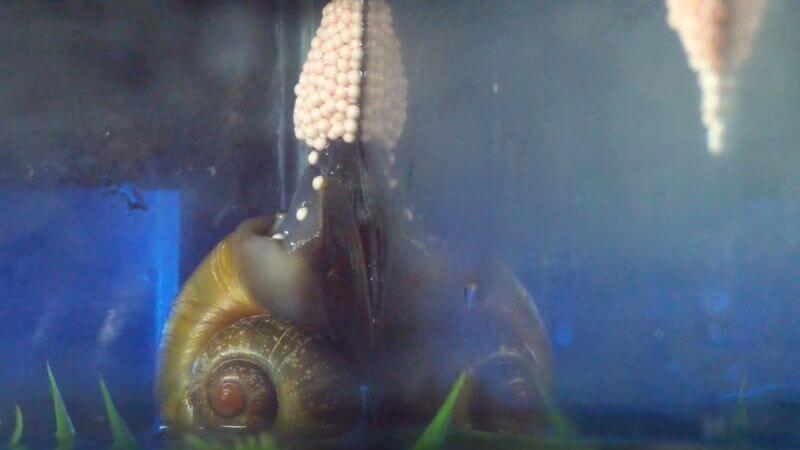 Legend has it that mystery snails were called “Mystery snails” because there was very little information about them in the snail community.

But with modern research and findings, many facts about them have been unearthed. Yet, despite that, there are still many mysteries surrounding their nature.

One such enigma is their eggs. How does one know they are fertile?

You can tell if mystery snail eggs are fertile or not by checking their color. Fertile eggs turn moldy prior to hatching. Also, the eggs in the clutches will appear irregular. Some tend to be puffier and whiter than others. This means that the eggs are fertile.

Ways To Tell If Mystery Snail Eggs Are Fertile

By Observing Their Appearance

Right after the egg clutch is laid, the eggs are pale pink. If you touch them, you will notice that they are delicate. This is when the eggs have only been laid for about 24 to 48 hours. Make sure you handle them gently to prevent any breakage.

They begin to grow darker in color. The texture will become a tad stiff. Do not mistake the dark color for unhealthy eggs.

It is actually a good sign of egg development. This will go on for the next two weeks.

It’s now nearing hatching. The eggs will again turn slimy and take on a dark grey coloration. In addition, you will observe irregular shapes and a puffier appearance.

The white mold seems to appear on the eggs’ surfaces.

Mystery snail eggs can take about two to four weeks to hatch. The eggs will hatch even faster if the tank’s temperature is higher.

By Putting The Eggs On A Paper Towel

Another way to check if the eggs are fertile is by putting them on a damp paper towel. The infertile egg will stain the towel, whereas the fertile ones won’t leave any marks.

However, remember to put eggs that have crossed at least 2 weeks mark.

Often, the egg clutches start smelling when they are infertile, even after crossing two weeks. They throw off a pungent odor similar to rotten chicken eggs.

Compared to infertile eggs, the fertile clutches do not give off any odor.

How To Tell If Mystery Snail Eggs Are Infertile?

In the beginning, you can’t distinguish which one’s fertile and which isn’t. However, if the eggs have the same pale pink color even after the second week, the eggs are likely infertile.

Another way to find out is by putting the 2-week-old eggs on a damp paper towel. If the eggs leave stains, they are infertile. Healthy fertile eggs won’t imprint any stain on the towel.

Most beginner hobbyists often tend to mistake the gender of their snails.

However, it is not their fault. We all were prone to that blunder at some point in this hobby. Learned the hard way.

And if you do not have any male snails in the tank, it is evident that the eggs are infertile. Do not wish for wonders because mystery snails aren’t asexual. They cannot reproduce on their own.

This usually happens when you have a couple of snails in your tank. You need to get a horde of these snails to get a breeding colony.

What To Do With Infertile Mystery Snail Eggs?

Once you identify them as infertile, you should dispose of them immediately. Infertile eggs can become the breeding ground for harmful bacteria. This can make the tank’s other residents ill.

Mystery snails often tend to attach their eggs above the waterline, making it hard for your fish to reach and eat.

So, what you can do is, scrape off the infertile eggs and feed other fishes. And, of course, they will devour them immediately.

If you do not have omnivorous or carnivorous fish in your tank, you will have to think twice before dumping eggs in the dumpster.

The unhatched eggs often happen to be late bloomers and can fill up your dumpster with hundreds of snails. So, you might want to rethink before deciding how to discard them.

Instead, get a ziplock bag and put the eggs inside it. Make sure it is airtight. Then only you can dump them.

Or, you can put the eggs in the refrigerator and freeze them. Wait for about 48 hours to let the eggs stiffen. Once they are completely frozen, you can throw them away.

What To Do With A Clutch Of Mystery Snail Eggs?

Snails are regarded as pests for a reason. It is because they proliferate rapidly. And you will have hundreds of snails if you let all the clutches hatch inside the tank.

That many snails can overwhelm even a seasoned snail breeder.

A single clutch can produce about 40 snails. And a single mystery snail will lay several clutches throughout the year. These many snails will definitely outgrow the tank.

Furthermore, this can result in an ammonia spike and crash the nitrogen cycle. Also, there will be less space for other tank residents.

So, you can breed only a clutch or two and discard the rest of them. Inspect closely and only keep the healthier ones.

How To Hatch Mystery Snail Eggs?

Maintain an appropriate humidity level and keep the terrarium’s temperature between 76 and 82 degrees Fahrenheit. Also, ensure the clutch’s position is above the water level.

What Happens If Mystery Snail Eggs Falls Into The Water?

Although mystery snails have both lungs and gills, the embryos inside the newly laid clutches won’t have developed them by then. So, once the clutch gets wet completely, the unhatched eggs will drown and die.

If you have an escargatoire of snails (yes, that’s what it is called), you will certainly witness snail eggs in your tank.

It is exciting to rear your own first batch of snails. However, make sure that you do not overdo it. A single clutch has about 40 snails in it. And these snails do not stop only at one clutch.

And if you let nature take its course, you will soon have too many of them – thus, ruining your tank’s nitrogen cycle.