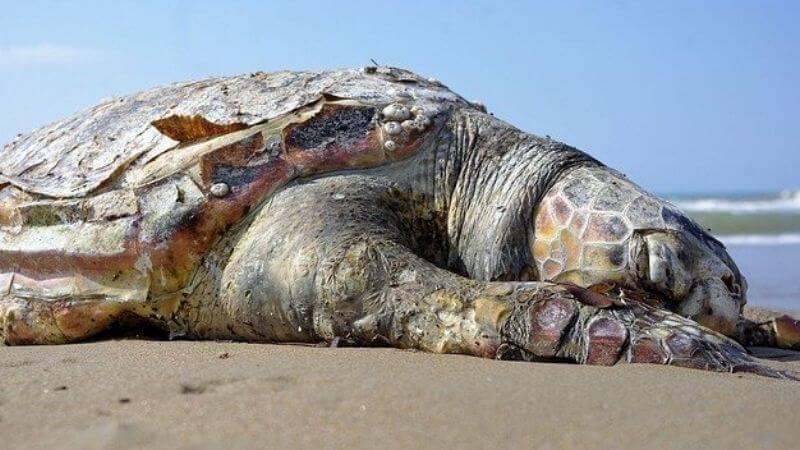 Turtles, as pets, aren’t known for their expressiveness. So, it can be hard to tell a happy turtle from a sad one. But you can definitely tell if a turtle is healthy or not.

As a responsible pet owner, you should be able to keep a turtle healthy, and in the worst case, treat it when it is sick.

However, no matter how observant we are, we sometimes fail to acknowledge their behavioral cues when they get sick. This results in the unexpected demise of our little friends.

So, in this article, I will shine some light on how to tell if your turtle is dying.

How To Tell If Your Turtle Is Dying?

A dying turtle will show signs like loss of appetite, lethargy, discharge from the mouth, change in the color of its feces, poor buoyancy, slow breathing, etc.

Below I have briefed in detail the signs of a turtle dying.

It is the most common sign to know if a turtle is dying. A healthy turtle will swim and bask routinely. So, when it stops upholding this regime, it often means that your turtle has no energy to do so.

So, you need to check whether your turtle is resting or going through infirmities.

Check by dropping the favorite treat near the docile turtle. Also, poke it gently to see any signs of mobility.

And if it doesn’t show any kind of movement, you need to console yourself because the end is near for your turtle.

How to Bury a Turtle? A Proper Ritual For Your Pet

A gravely sick turtle will have thick fluids along with bubbles coming out of its mouth, nose, or even eyes. The bubbles are the puss discharged from the infection. Usually, turtles in the last stages of their lives show these symptoms.

Turtles suffering from terminal respiratory illnesses like pneumonia succumb to death in such a manner.

A healthy turtle will fill its lungs with air to expand and contract its chest. But an unhealthy turtle does not have the vitality to intake enough oxygen. Thus, displays labored breathing.

At their final stage, turtles go into dyspnea and cannot fulfill the oxygen requirement. Their lungs won’t function properly to filter oxygen, which is why they slow down their breathing.

If your turtle is breathing this way, there isn’t much time left.

Turtles suffering from the advanced stage of parasite infection can have blood in their feces. Usually, the color of the blood isn’t red. It mixes with other elements/enzymes inside the digestive tract and comes out as black feces.

If your turtle is defecating blood, it is probably bleeding internally due to organ failure.

We know that turtles are messy creatures and like to poop anywhere they want, but sometimes, a dying turtle will not open its bowel at all.

Turtles suffering from gastrointestinal ulcers often have problems discharging waste from their body. Failing kidneys could also be the reason behind it.

A bloated turtle has poor buoyancy. It will have a disoriented swimming pattern, usually in a lop-sided position. Often, it is due to digestion problems.

If this is a frequent event, it means that your turtle’s internal organs are failing rapidly.

However, sometimes, food that builds gas inside a turtle’s digestive system also causes problems related to buoyancy. So, it isn’t counted as a full-proof sign of a dying turtle.

If the turtle’s skin is wrinkled and shrinking, it is a sign of an ill turtle on the verge of its life.

Dehydration can be the reason behind it. The dehydrated turtle begins to lose weight, and the skin folds and withers when it is about to die.

Eyelids swell in turtles suffering from respiratory illnesses. Their eyes get shut due to swelling, and the turtles will be partially or fully blind.

This usually happens when the water parameter isn’t suitable for the turtle.

And if prompt medication isn’t enforced, the turtle will die.

Sunken eyes are a sign of a dehydrated turtle. Weight loss, especially skin fat around the turtle’s eyes, will be the initial symptom. You should monitor your turtle’s eating habits before it gets too late.

Older turtles also have sunken eyes. So, be mindful that you do not confuse it with signs of a turtle dying.

Shell deformation is another sign of a dying turtle. A healthy shell is smooth and clean. However, a dying turtle’s shell develops cracks and fissures with several other irregularities.

The scutes fall off easily, and discoloration of the shell occurs. This typically happens to a turtle with a rotten shell. Also, fungus and other bacteria attack the shell, causing shell rot.

Turtles nearing death will lose interest in eating. They will not respond to your touch even during poking or handling.

Their digestive system becomes weak, and they can’t digest food and will stop emptying their bowels.

Loss of appetite is often linked with a terminal illness, resulting in the turtle’s demise.

If your turtle is experiencing excruciating pain, it will start producing noises. It will whistle, bellow, cry, etc.

How To Prevent Illness in Turtles?

Dying of old age is inevitable. However, the premature death of your pet is something that you can prevent.

These are some primary but valuable tips to prevent your turtle’s untimely death.

How To Know If My Turtle Is in Brumation Or Dead?

You can check whether your turtle is in brumation or has passed away by putting it in lukewarm water. If your turtle is brumating, the warm water will trigger its sensory receptors and provoke actions like urinating, defecating, or twitching legs.

If your turtle doesn’t show any bodily functions even after putting it in warm water, it is probably dead.

And when in doubt, you can reach out to a nearby vet.

Final Words On How To Tell If Your Turtle Is Dying

Among pets, turtles are blessed with longer lives than most. However, some overlooked factors could cause their untimely death.

So, you need to ensure they are getting everything that they require.