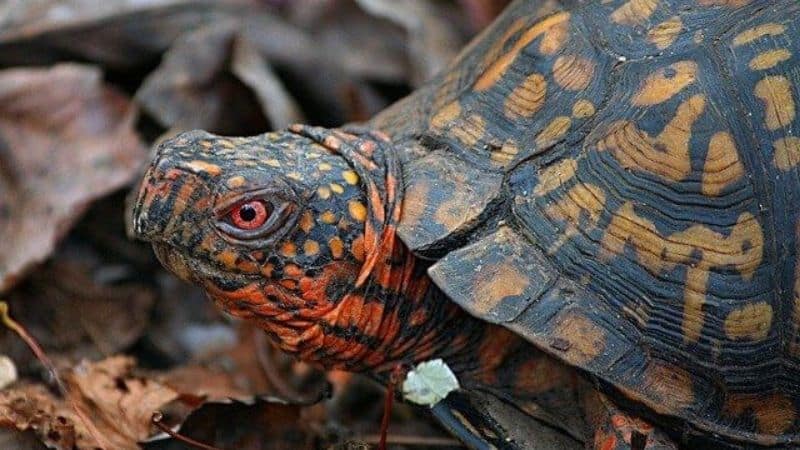 How To Tell The Age Of An Eastern Box Turtle?

Unless you’ve raised your Eastern Box Turtle since it was hatched, there’s no surefire way of telling the age. Determining the age by counting the growth rings on its shell is a traditional method – but it’s debatable. Comparing the turtle’s size with other turtles of the same species can also give an estimate.

Finding out how old an Eastern Box Turtle is isn’t about quenching one’s curiosity as much as it’s about taking care of your pet according to its age.

At different stages of life, they need different kinds of arrangements, diets, and so on.

So even though there’s no 100% sure way of decoding the age, we can always try, right?

Here are a few methods accepted in the turtle-keeping community.

The most common answer you’ll get when asking how to tell the age of an Eastern Box Turtle is, “count the rings on the scute.”

So, scutes are the scales that grow on your Box Turtle’s shell. And the rings within the scutes often alternate between wider rings of one color and narrower rings of another. So, if you count the number of rings and divide by 2, you can get a rough estimate.

Both juvenile and adult Eastern Box Turtles have well-developed rings in their scutes. So, it shouldn’t be too hard to count.

Make sure you are counting the number of rings – not scutes! It can be confusing.

In some forums, I read that you can also learn your turtle’s age by counting the markings on the belly plates. But I don’t think that approach will work too well.

My Eastern Box Turtle, which was caught in the wild, doesn’t have clear markings on the belly.

So, if your turtle has 14 rings on the scute, divide it by 2. It’s believed that every 2 rings represent 1 year.

Thus, the rough estimate of your turtle’s age should be around 7-year-old.

As I said, there’s no guaranteed way to find the age. So, this process has a few shortcomings. For starters, once the turtle is around 15-year-old, it’ll be challenging to tell the age as rings get closer and closer.

It’s also crucial to note that the rings on the scute are formed during periods of feasts and famine.

It’s widely believed that the rings indicate seasons like summers and winters.

But actually, the rings develop when the turtle consumes lots of food or is starved for months.

And since captive Eastern Box Turtles neither go through long courses of overconsumption or famine, this method has many caveats, to be honest.

Checking An Eastern Box Turtle’s Size To Find Out Age

A comparatively scientific way to figure out an Eastern Box Turtle’s age range is to check its size. The answer will be somewhat more accurate if your pet is fairly young. Make sure you measure from the top to the tail. And while measuring, rest your turtle on a flat, hard surface to get accurate results.

If you have a hard time getting your turtle to stay still or stretch its neck for measurement, try to lure with a treat.

Don’t be too impatient if your turtle’s not cooperating. This will only stress out your pet, who in defense, can try to bite you.

And once you collect the measurement, study the growth chart for your Box Turtle subspecies.

Box Turtles usually reach lengths between 4.5 and 6 inches, although captive ones grow as big as 8 inches.

And females are typically bigger than male turtles.

Does The Size Checking Method To Find Turtle’s Age Work?

Between studying the turtle’s size and counting the scute rings, the former is more scientific and plausible. Even though you cannot riddle out the exact age, there’s a good chance you can gauge the correct age range.

This will help you understand your pet’s behavior, appetite, and health status, vital for the reptile’s wellbeing.

However, note that a turtle bred and raised in captivity tends to grow faster and larger than its wild counterpart.

If an Eastern Box Turtle gets plenty of good food, exercise, basking light, and so on, it can grow rapidly in the early formative years.

Nonetheless, the size chart shouldn’t be too different for both turtles.

If you are too curious about your pet’s age, I think there’s an option to get to the bottom of the turtle’s age by examining its bone. But Box Turtles don’t qualify for this as they are purely terrestrial species.

In aquatic or semi-aquatic turtles, scientists can calculate the age by studying the annual rings generated on the box.

Other Subtle Signs Of Aging In Eastern Box Turtles

Eastern Box Turtles are omnivores, but they often switch to a herbivore diet as they grow old. So, if your pet is more inclined towards eating plants instead of shrimps and feeder fish, most probably, your turtle is a mature one.

Older Eastern Box Turtles are more docile in nature and tolerant of new tank mates. They’ll usually keep to themselves. On the other hand, younger ones will show more territorial aggression and fight with new members.

The last giveaway sign is the turtle’s appearance. Every dent and every scar on the turtle’s shell has a story to tell. So, if the Eastern Box Turtle in question has multiple scars, dents, and tears in the shell, it probably has experienced many winters.

So by now, you probably know that there’s no one scientifically proven, sureshot way to tell a turtle’s exact age.

Regardless, a few popular methods can guess the age range — not the exact age.

One such method is counting the rings in a scute and dividing them by 2. It’s believed that every 2 rings represent 1 year.

However, the rings are formed in the periods of feasts and famines.

Similarly, as the turtle gets older, the rings get closer and closer, and it’s super hard to count them correctly.

So, this method isn’t entirely truthful.

Another widespread method is to calculate the turtle’s size and compare it with the size chart. This method can give a reasonable estimate of the age range.

But this isn’t short of shortcomings as well. Depending on the turtle’s living condition and the nutrients it receives, the size can differ significantly, leading to confusion.

So, that’s all there’s to know about an Eastern Box Turtle’s age. Unfortunately, there aren’t guaranteed methods, but the approaches mentioned above will give you a ballpark estimate that’ll help you understand your turtle and its needs better!