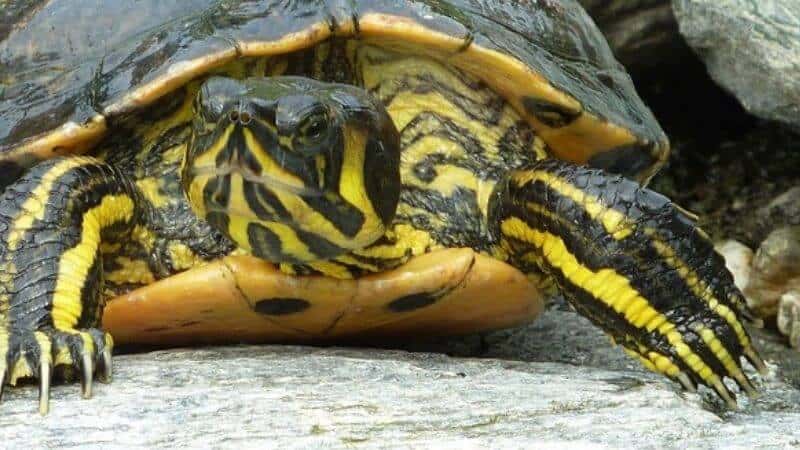 Yes, you heard it correctly. Turtle nails do need to be trimmed. Unlike wild turtles, the captive ones can overgrow their nails. These overgrown nails can break from the middle and can hurt. It is the same with us, too.

Turtles in the wild have to hunt for food. They will use their nails to dig and hunt for insects and other invertebrates. This naturally files their nails and keeps them from overgrowing. However, captive turtles do not have to go through all that trouble in search of food.

Thus, they have long nails which need to be trimmed. In this episode of turtles, I will explain how to trim turtle nails.

How To Trim Turtle Nails?

You need to collect necessary items such as a clipper, a towel, and a first aid kit. Wrap your turtle with a towel to prevent sudden movements while you clip its nails. After you trim, dip the nail tips with a betadine solution to prevent any infection.

If you notice your turtle’s nails getting longer, you need to collect certain things before you start trimming. Nail clippers for cats and dogs can be used to clip off a turtle’s nails, too.

There are several types of nail clippers to choose from. I use this clipper from gonicc. They have the safety stop blade, which prevents me from cutting my turtle’s nail too short.

Another essential thing required before clipping your turtle’s nail is a towel. I use a towel to wrap my turtle so that it doesn’t move abruptly while trimming its nails. This also prevents my hands from getting bitten.

You can use any towel to wrap your turtle. After the trimming is done, wash it and keep it separate from your personal ones. Turtles carry the salmonella virus, and it can transmit to you or your family if you use the same towel.

Before trimming your turtle’s nails, make sure you have a first aid kit on your side. Sometimes, accidents like bleeding due to overcutting can happen. So, a first aid kit will come in handy to stop the bleeding.

Also, apply the betadine solution after you trim your turtle’s nails.

Every house should have a proper first aid kit. So if you don’t have one, it’s time you get this all-purpose kit from First Aid Only.

This kit has everything you need for first aid response, and you will not run out of medications anytime soon. And the best thing about the kit is, you can fit it inside your backpack and take it on camping, hiking, or family picnics.

Wrap A Towel Around Your Turtle

If your turtle fidgets and wiggles while handling it, you need to wrap a towel around it. This will give you the extra grip and also keep your handling gentle.

Next, place the turtle on a table or your lap. If possible, get an extra hand to stop the turtle’s movements.

Only open the towel outlet of the nail you are about to trim for better grip.

Most turtles have small nails, i.e., the size of a cat’s. So, a cat clipper will suffice to trim a turtle’s nails.

Be Mindful While Clipping

While trimming, you should be careful not to get to the quick of the turtle’s nail. There are nerves and blood vessels in the quick, and it can hurt when you cut them with the clippers.

If you look closely, you can see the quick inside the nail. That’s where the veins lie. And if you accidentally nip the quick, the turtle’s claw will bleed.

After successfully trimming the nails from the first limb, move onto the next nail and finish all four.

If you see the quicks too near, leave them be. You can trim them later.

What To Do If You Cut Into The Quick?

It will surely be painful for your turtle if you cut into the quick while trimming nails.

To treat this, you can use the betadine from the first aid kit to prevent infection.

Also, you can apply the antibacterial ointment you have in your first aid kit.

A home remedy for treating the quick wound is by putting cornstarch over the nail tip. This, too, works effectively.

Some More Tips On Clipping A Turtle’s Nail.

Trimming for the first time can be challenging. So, an extra person to hold your turtle will make things steady and easy.

Turtles can bite if they feel threatened, so wrap a towel around them to get a firm grip. A towel helps them to be calm and makes it easy to clip.

Turtles can get stressed when you handle them. They might try to retract their limbs and head inside the shell. So, you need to tickle the limb-side plastron and untuck the limbs.

If the tickling doesn’t work, gently poke and push your finger on the opposite side limb. The turtle will then push out the limb that you are trying to trim.

Once you get hold of its limb, you will be able to trim it.

Do I Need To Trim My Turtle’s Nails?

Unlike wild turtles, captive ones do not conduct activities such as digging and climbing on harsh surfaces, which causes their nails to grow long. Longer nails can get caught in carpets, decors, plants, and filters. And when they use force to free themselves, they can inflict injury.

If you are keeping more than one turtle in your tank, it is recommended that you trim your turtles’ nails.

Turtles stack on top of each other while basking. And when the one with sharp claws tries to climb on another, it can injure its tank mate during the ascend.

Scratches during stacking can cause infection on a turtle’s shell and can invite other severe illnesses like shell rot.

So, yes, if you are confident enough to trim a turtle’s nails, you can do it. But, do not rush blatantly, as you will only increase the chances of hurting your turtle.

There is another school of thought among turtle owners regarding why trimming turtle nails is unnecessary. Let me explain why.

Why Shouldn’t You Trim Your Turtles’ Nails?

Nails are the show of dominance and masculinity in male turtles. This helps them get a grip while riding on a female during mating. Also, turtles love stacking and use their nails as crampons while climbing over one another’s shells. So, they need their nails to be long.

Let me brief you further.

Having Long Nails Is Natural For Turtles

Turtles spend most of their time in the water rather than on land. Long nails do not affect their ability to swim. This doesn’t decrease their performance. Instead, it helps them injure their prey by helping to hold them while they bite.

Long nails are considered to be bragging rights among male turtles. Females tend to choose mates with longer claws. This is why you shouldn’t trim their nails. This will only lower their chances of mating.

Males use their claws to climb over the female’s shell. Longer nails provide more grip and stability during mating.

Trimming Can Injure Your Turtle.

If you do not know what you are doing, you can injure your turtle. It is better to leave the nails long than hurt your turtles while trimming them. A novice person can cause more harm than good if things don’t go their way.

How To Naturally Wear Down Your Turtles’ Nails?

Make the basking area coarse with a small portion of concrete. This will help your turtles naturally file their nails while making the ascend to the basking spot.

Final Words On How To Trim Turtle Nails

Trimming your turtle’s nails is sensitive. The chances are that you might injure your turtle if you don’t know how to do it. So, if you aren’t confident about it, take it to the vet and have them do it.

As aforementioned, there are two schools of thought on trimming a turtle’s nails. One group advocates trimming as necessary, whereas the second group thinks otherwise.

It is up to your preference as a turtle owner to keep these nails long or trim them short. No matter what you choose to do, the well-being of your turtle comes first.