Is Blue LED Light Harmful To Fish? Can It Damage Eyesight? 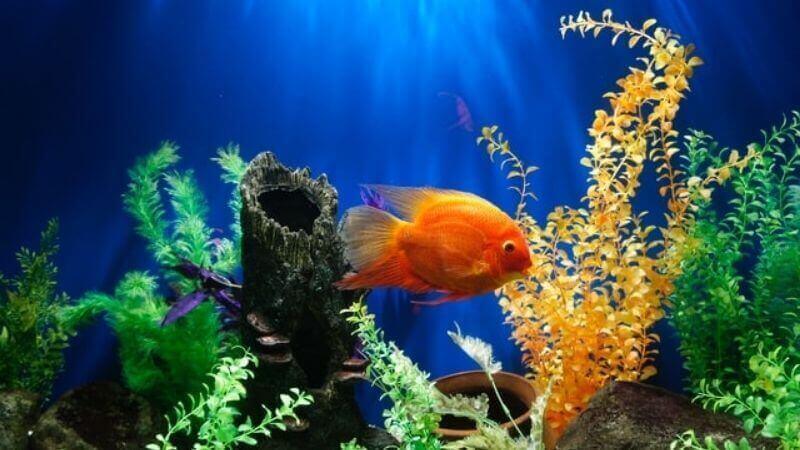 I use blue LED lights in my aquariums. I love how they help to emulate the natural underwater setting. However, when casually searching for the best blue LED lights, I found two worrying research pieces focused on their effects on a fish’s eyesight and growth. So, is blue LED light harmful to fish?

I did my very own research and have come up with a few conclusions! And as always, I have pooled all information in a readable and short blog for you.

Right off the bat, no – blue LED lights aren’t harmful to fish as long as you use them in moderation. However, if you keep them on unnecessarily for prolonged periods, it will mess with the fish’s biological clock and deprive it of sleep. And naturally, this has a negative impact on its health.

This particular piece from 2019 has studied the effects of blue light spectra on retinal stress and damage in goldfish. The experiment using blue LED lights at 3 intensities lasted 3 weeks. And it was found that irradiation with blue light for more than a week induced retinal stress and may even cause apoptosis in the retinas.

This is definitely worrying. But note that this is the only research piece I found on the internet about blue light’s effect on fish despite digging for several hours.

Instead, I came across dozens of hobbyists who have used blue LED lights in their tanks for years without any hiccup. So, as long as you don’t overexpose your fish to lights excessively and don’t stare at them directly yourself, blue lights are just as good (and maybe bad) as other colored lights.

I found an interesting albeit farfetched tip on one of the forums. Apparently, if fish consumed plants like chlorella, enriched with mycosporine-like amino acids (MAAs), they could concentrate these organic compounds in their ocular lenses to act as natural sunglasses.

Chlorella is found in almost all freshwater lakes of the world. And you don’t really need to have green thumbs to grow it at your home.

This particular algae offers a host of benefits for us, too – ranging from enhancing immunity and blood sugar levels to promoting weight loss.

Old but relevant research from 2004 revealed that species like guppies, carps, crucian carps, silver carps, and rotans grew at the best rate when kept under blue lights. For example, in rotans, the growth rate exceeded by 21-23%.

Interestingly, red and yellow lights inhibited the growth in almost all species. The rate decreased by 9% and 21%, respectively.

So, if you are enthusiastic about breeding and growing your fish, I think it’s best to steer clear of red and yellow lights!

If you think this is the only benefit of blue LED lights in a fish tank, you’re wrong, my friend! Turns out plants love them too!

What Does Blue Light In Fish Tank Do? What About Red And Green?

Can Too Much Water Conditioner Kill Fish? It Can Bind Oxygen!

How To Save A Dying Cichlid? 4-Step Guide

Plants don’t absorb green light. Most of it reflects off them and into our eyes, making them look green to us. So by that logic, leaves aren’t blue because plants readily absorb those parts of the light spectrum and grow.

The blue light spectrum spans from around 380 nm to 490 nm. Thus, they are critical in terms of light energy that fuel and drive photosynthesis.

While blue light can penetrate over 300 feet in depth, green lights can’t even make it to 100 feet.

Here’s a tip if you have a reef aquarium – corals have evolved to use the blue spectrum of light the most efficiently over millions of years. Therefore, the corals in your tank will benefit the best from blue lights.

Red lights are pretty beneficial too. For example, they’re responsible for making the plants flower and produce fruit. They also play a pivotal role in the plant’s early stages for seed germination, root growth, and bulb development.

However, as I mentioned above, red lights can potentially inhibit a fish’s growth. So, I think it’s better to stick to blue lights unless you have a plant-exclusive tank.

I’ve been raving about blue lights all this while – but what is it exactly? Let’s find out!

What Is Blue Light?

The white light that we receive from the sun is actually made up of all the rainbow colors! When all the seven colors are present, daylight is created. So, blue light is simply one color of the spectrum and quite a potent one, I might add!

Blue is associated with calmness and serenity. It’s also known to have an astringent effect. So, yes, blue light definitely helps calm the fish and encourages their bodies to slow down and rest.

Also, the blue light in the tank helps to mimic the natural moonlight that fish are exposed to in the wild. Hence, it is the perfect shade to help fish transition from daytime to nighttime.

I know that sounds dramatic, but it really will!

Can You Leave Blue LED Lights On In A Fish Tank All Night?

Nope – as beneficial and aesthetic as blue lights are, they are still not meant to be kept on throughout the night. However, if you have both nocturnal and diurnal species living together, you can turn the lights on for a couple of hours at night. Set a timer, so you don’t have to operate it manually.

You’d be surprised to know how similar a fish’s sleep cycle is to ours. A healthy fish will sleep for as long as 8-12 hours every night. So, it’s best to turn off the lights at these hours.

I know it can be tempting to keep the lights on all night for aesthetic purposes but don’t.

And that brings us to our next question!

How Much Light Do Aquarium Fish Need?

Generally, most aquarium fish species need about 8-12 hours of light each day. Mine receive around 10 hours of light every day. 8-12 is a pretty large range, I know. It depends on quite a few factors:

The points above are self-explanatory, but I’d like to touch on one of them.

The amount of light fish need every day depends mainly on where they come from. For example, tropical fish like cichlids and bettas have evolved in environments that roughly receive 12 hours of light each day.

Thus, you should strive to provide them 12 hours of light daily – a combination of ambient and aquarium lighting.

On the contrary, cold-water species like minnows, goldfish, danios, and ricefish hail from temperate climate zones. In these areas, the daylight hours differ depending on the season.

So, you might want to constantly vary the amount of light they receive throughout the year for these fish.

To create a more natural surrounding and give your fish the best life possible, go an extra mile, do some research, and match the length of tank lightning to what they’d experience in the wild.

I have told you basically everything I know about blue LED lights and fish tanks. But do fish actually like LED lights?

Well, fish cannot tell the difference between one light and the next. However, they sure can experience even the most subtle changes in brightness and heat. Since LED lights do not produce enough heat to warm up the tank’s water, it’s definitely a better option.

Plus, they use less energy and last twice as long as fluorescent bulbs – so they’re better for your pockets too!

Before we end this article, let’s quickly skim through the dos and don’ts of adding LED lights to your fish tank.

Ventilate your LEDs: Although LED lights don’t transfer heat into the tank, they produce a fair amount of heat upward. This can quite significantly impact the light’s lifespan. So, you need to ensure ample air circulation around the LED light strip.

Play with the dimmers: Dimmers are a great way to adjust the tank’s brightness and blend different colors. Especially if you are using multiple LED color spectrums, try dimming one color and enhancing the brightness of the other.

Get the LED lights wet: Even though most LED lights available today are water-resistant, none of them are designed to be used underwater. Otherwise, you will end up damaging the LED circuit board.

Keep LEDs close to metal halides: Don’t forget – heat is the enemy of LED lights. Mounting the light strips close to other forms of lighting like metal halides can dramatically compromise the LEDs’ lifespan.

Blue light isn’t harmful to fish per se. However, I should tell you that this one particular study done in 2019 revealed that blue light did have a detrimental impact on goldfish’s eyes.

But enough research hasn’t been done on the subject to come up with solid conclusions.

If you’re using blue lights in the tank, just make sure you don’t leave it on all the time – especially at nighttime.