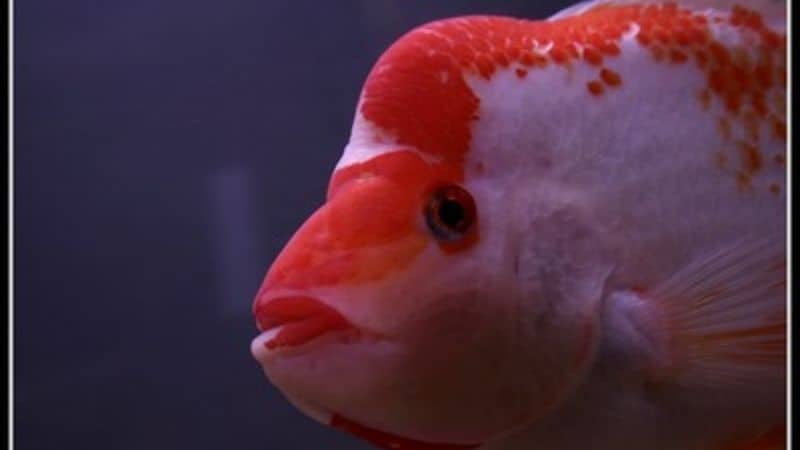 A friend of mine, a fellow fishkeeper, recently got a pair of red devil cichlids for breeding. And once he brought home the fish, we had serious doubts if the supposed male cichlid was indeed a male!

We looked up on the internet, even scholarly journals, but the information was scarce and scattered. Finally, after digging through dozens of forums and comparing answers by seasoned aquarists, we concluded that the fish in question was actually a female. Bummer!

So, I decided to write this blog with all the information I accumulated.

Top 8 Differences Between A Male And Female Red Devil Cichlids

Male red devil cichlids are bigger by a few inches than their female counterparts. They also have a prominent nuchal hump that’s missing in females. Likewise, a male’s gender papillae are also more protruding to facilitate sperm deposition, while females have broader papillae.

A male red devil cichlid is always larger – growing to 15 inches in size.

Male red devil cichlids have a prominent nuchal hump, a raised feature on the forehead.

The nuchal hump is missing in female cichlids.

A male red devil cichlid has protruding gender papillae, which facilitates the deposition of sperm.

A female red devil cichlid has a broad and flattened papillae/ovipositor that helps in egg-laying.

The vent in male red cichlids is usually the same size as the anus.

Vent in female red devil cichlids is comparatively bigger than the anus.

Female red devil cichlids are more peaceful and docile than their male counterparts.

So, as shown by the table, these are some of the most distinct differences. Answering if the red devil cichlid is a male or female can be quite tricky because they display minimal sexual dimorphism.

On top of that, these fish take around three years to mature – making it even more confusing.

If a female has more vibrant colors or doesn’t have well-developed genital, it’s easy to confuse her for a male.

Similarly, if the male fish in question is often dominated or has rounder dorsal fins, he could be mistaken for a female. But, in reality, he’s just a late bloomer.

If you’re going to opt for venting to find out, make sure the fish is still in the water during the entire process. This will ease some of the stress.

Now let’s look at some of the similarities they share.

Both male and female red devil cichlids have a stocky body shape.

Both male and female red devil cichlids have a powerful set of teeth and jaw, contributing to their predatory instincts.

Both male and female red devil cichlids have rubber-like, thick lips in either orange or black shade.

So, I hope you can tell the difference between a male and female red devil cichlid by now.

Now, let’s move on to the short guide on breeding them.

Breeding red devil cichlids in captivity is reasonably easy. Even for beginners, the breeding process should be hassle-free. For starters, they are monogamous. They stick with one partner until the end. Thus, problems caused by aggression while finding mates are reduced.

Once you spot a pair of ‘lovers,’ move them to the already conditioned breeding tank. The temperature should be slightly on the warmer side – 77°F – to mimic the naturally warm water found in their native region.

Make sure to feed the pair nutritious food like daphnia and bloodworms.

Once the female produces eggs, her body will look more rounded and swollen. After all, there are at least 600-700 eggs in her body.

Next, she will search for a suitable area in the tank to lay the eggs. They usually prefer a flat rock or an inclined surface for this.

You can help create a hospitable area by introducing the right kind of driftwood or building a small hill out of the substrate.

Once she finds the perfect place, she’ll lay all the eggs at once. The eggs are translucent and have soft amber colors.

The male will then fertilize the eggs, which will quickly hatch within the next 3-4 days.

Both male and female red devil cichlids take part in raising the fry. They may move their hatchlings to different locations in the tank to mitigate risks. The male cichlid will even dig pits to offer better protection.

After a week or so of hatching, the fry should be ready for free swimming.

Red devil cichlid’s native habitats are the Xiloa, Managua, and Nicaragua lakes of Central America. Thus, they prefer calm habitats with soft water flow and lots of rocks and plants to hide.

Here’s a quick guide on the best water parameters for red devil cichlids:

Final Words: Is My Red Devil Cichlid Male Or Female?

Since red devil cichlids don’t display a high degree of sexual dimorphism, it can be quite tricky to distinguish a male from a female.

Make sure to study features like size, fins, and genitalia to determine the sex. But most importantly, look for the nuchal hump that’s only present in males.

And remember – these fish take three long years to mature. Thus, it can be trickier when all the organs aren’t well developed.