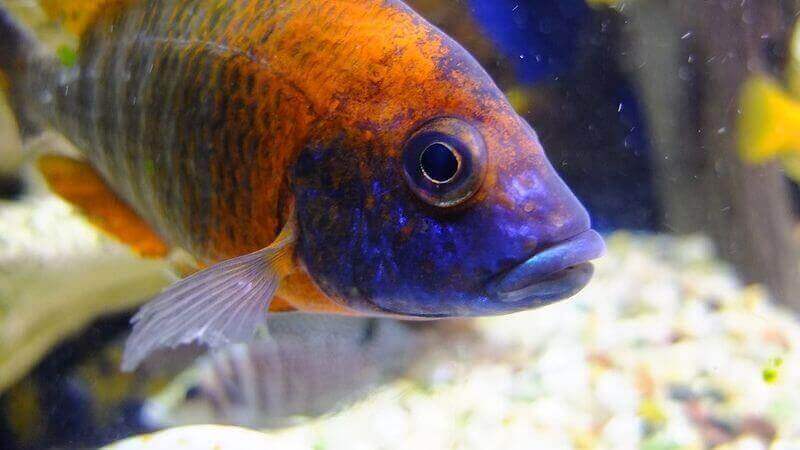 Red Zebra Cichlid – such an interesting name! But they’re neither red, nor they have zebra-like stripes. Funny, right? You wouldn’t think so if you knew about their predatory prowess.

Natives of Lake Malawi, red zebras are some of the most beautiful cichlids we know. So, in this blog, we will discuss how to differentiate a male from a female.

Now, let’s look at these differences in detail.

An adult male red zebra cichlid can grow around 5 inches, while a female will clock in at 4 inches. When compared side to side, you can quickly tell the male apart from female due to their larger, bulkier body.

However, note that these fish only reach adulthood around 3 years of age. So, this method can only be applied if your fishes are a couple of years old.

In captivity, the diet your fish eats also plays a pivotal role in their size and rate of development.

Males have larger and more numerous spots – around 4 to 7. On the other hand, females have smaller and fewer – 0 to 3. These spots actually serve a unique function for the survival of red zebras.

When carrying eggs, the female looks as if she just stuffed her mouth with lots of food. You can also see the tiny eggs in the mouth.

Another interesting fact: A male red zebra will often hide some of his spots to give the illusion of fewer spots. Why? They’re posing as a female to avoid bullying and harassment from dominant males.

There’s one more interesting fact about these spots that I’ll write below. Keep reading!

Both male and female red zebra cichlids are known to be aggressive. However, this nasty side is more prominent in males. You will often see them chasing and bullying fishes smaller than them. They’re also very territorial.

And if you see a cichlid constantly fawning over a rock or other inclined surface, it’s once again a telltale sign that it’s a male. This is because only a male red zebra cichlid is tasked with cleaning the spawning site.

And the female will actively search for a suitable place to deposit her eggs.

Due to sexual dimorphism, males and females in red zebra cichlids sport different colors, and none of them is red. Instead, the most commonly occurring coloration is deep blue in females and reddish-orange in males.

However, there are several variations and color morphs. These color morphs occur naturally and are different from the standard coloration of the species. But don’t confuse it for another species or subspecies.

For instance, there could be red-orange or blotched females and vice versa. Likewise, morphed males found in the Minos Reef have pinkish-white bodies with shades of blue in the fins.

Blotched males (a mix of red/orange and blue) are known as marmalade cats and are extremely rare.

Actually, the early exporters of the aquarium trade bred red females with morphed males to create the strain for orange-red males. So over time, orange-red males became the most commonly found variant.

How Do Red Zebra Cichlids Mate?

Unlike red devil cichlids, red zebra cichlids don’t mate for life. Thus, you shouldn’t try to establish breeding pairs. Also, there’s no one particular mating season. The breeding process starts with the male wooing the female, and in no way is it chivalrous.

The female will lay her eggs on a flat surface or in a hideout like a cave at the bottom of the tank. She can lay up to 60 eggs at a time. She will then gently scoop and fit all the eggs inside the mouth before the male fertilizes them in her mouth.

Once again, unlike red devil cichlids and other South American cichlids, red zebras don’t raise the fry together. Instead, they go separate ways, and only the female is tasked with taking care of the hatchlings.

The eggs usually take around 10 days to hatch. However, the female will keep the fry in her mouth for another 15 days before releasing them.

Watch this fascinating video of a female red zebra cichlid releasing her fry:

Final Words: Is My Red Zebra Cichlid Male Or Female?

So, although sexual dimorphism isn’t too obvious with red zebra cichlids, males and females are usually different colors.

There are several color morphs and anomalies that exist. Still, the most commonly occurring colors are deep blue for females and reddish-orange for males.