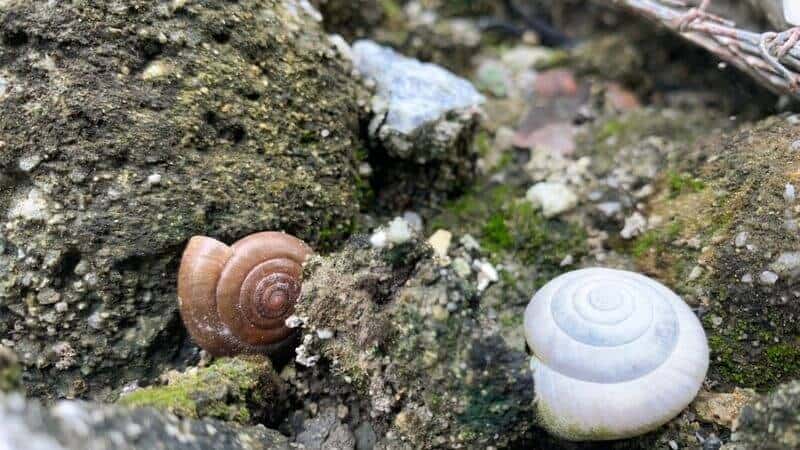 One of the slowest creatures on earth, snails, spent most of their time eating algae or resting for a prolonged period. Their lack of locomotion is the reason you might wonder—is my snail dead or hibernating?

Keeping snails in your aquarium has loads of benefits. They can be excellent scavengers in your aquarium. They feed on uneaten food, which is left by your fishes and turtles. One of their favorite food is the outgrown algae which grow in the tank.

So, keeping a snail will help you achieve a clean tank for your fishes. Let’s move now to the main question.

How to Tell if a Snail is Dead or Hibernating?

Due to their slow movement, it can be quite tricky to tell if a snail is dead or sleeping. They spend most of their time sleeping, so don’t start mourning.

The sure way to tell whether a snail is dead or hibernating is by smelling. If there’s a foul odor coming from the body of your snail, then that’s the sign of a slow snail. If you are still unsure, then change the water in the tank. And even after changing the water, the pungent smell is still lingering; then you have a dead snail in your aquarium.

A pungent smell, no signs when being touched, and an open trapdoor on a snail’s body are the symptoms of a dead snail.

Sometimes, snails like to sleep for days. Hibernation like these is typical in snails. Also, they rest during day time and move during the night time. However, if you find your snail not moving for three days, you need to examine it further.

How to Check if a Snail is Dead or Sleeping?

Be gentle while picking your snail from the aquarium. If its body isn’t glued to the aquarium glass, then it probably is alive. When touched, their body starts to curl up; then, it is another sign that the snail is alive.

After you see that your snail shows the signs mentioned above, then put it immediately back into the tank. Snails are likely to dry up real fast when taken out of their habitat.

Sometimes you might see the snails floating up on the surface. Do not worry when this happens because having too much air in their lungs can cause them to float.

Further signs of your snail being alive are by checking its trapdoor—these opercula, also known as a trapdoor, help snails resist drying out. Moreover, snails use this as protection if they sense danger from the predators.

So, if you find that their trapdoor is open, then your snail has died.

How Long do Snails Live?

Snails in captivity live longer than the ones in the wild. The chances of encountering a predator in the wild are high. This is the reason why snails in the wild have a lower lifespan than the ones you keep in your tank. Snails live for about three to ten years if they get to live in suitable habitat.

Snails have a lower metabolism, so this results in an extended life span. However, when put at a higher temperature, the tank heaters will have a faster metabolism rate.

If you keep your snail at a high temperature, you are making his metabolism faster and accelerating its aging process. This will cause the snail to die much sooner than you think.

Also, a clean tank with freshwater determines a snail’s lifespan. Chlorinated and salty water harms a snail’s body. Make sure you dechlorinate your tank water to keep your snail healthy inside a tank.

How do Snails Sleep?

Snails spend most of their day time sleeping. Research has shown that snails usually take a short nap about seven times in 13 hours. Also, snails sometimes will sleep for 24 hours. I find my snails sleeping for 2-3 days. (Those days, I presume they are dead!).

Snails in the tank will search for their sweet spot and will sleep there. Every time they need a nap, then they will head for the same location to sleep. So, if you find your snail not moving for a few days in the same spot, it is likely that they are sleeping.

Also, you can call them nocturnal as you won’t see them being active during day time. They like to feed and move only at night.

Snails have a firm grip on their legs. Yes, you heard me. They have a muscular foot, which they use for crawling. Snails crawl with the use of their muscular legs, which are lubricated with mucus.

These mucus embedded feet can get a grip on anything. These feet act like slime, and they use them while sleeping too. This is the reason why snails can sleep upside down.

However, for hibernation, it can be different.

How do you tell if a Snail is Asleep?

Unlike us or primates, snails do not snore or close their eyes while sleeping (It would be cool if they did). Usually, snails will sleep on and off during their 13 hours of sleep. With the help of an elongated random sleep pattern, they will then be full of energy for the next 30 hours, where they will feed and do their daily snail chores.

Why do Snails Sleep for Such a Long time?

In an aquarium, a snail won’t be sleeping for a long time as they do in the wild. (Three years is a heck of a long duration for sleeping!). Snails require moisture to survive, and sleeping helps in keeping them moist during winter.

As for summer, temperatures will drop in the wild and, to cope with the rising temperature, snails will go for hibernation. This will cool off their body temperature and helps them escape the warm climate.

Hibernation is popular among rodents, which lets these species to survive winter. However, with snails, the hibernation is peculiar. If there’s a lack of food, snails are likely to go for hibernation. When there’s a food deficit, they hibernate and wait for years to let those algae grow. This allows them to enjoy an eating frenzy after they are awake.

Pond snails can lower their metabolism rate significantly, which lets them hibernate for a more extended period. Reports have come that they are found to be hibernating for up to three years.

Should you wake your snail up when they are sleeping or hibernating?

Snails need sleep and hibernation for their survival. Hibernating requires lots of energy, so waking up a snail while sleeping isn’t a great idea.

However, if you want to wake them up when you feel like they have been sleeping for ages, simply pick them up and dunk them in the tank. You need to be careful while dipping them in the water as their shell might break while doing so.

Snails can stick to the surface even while they are sleeping. When going for hibernation, it is needed to prevent themselves from flowing or floating when the water current increases in their habitat. When a snail is dead, their suctioning body, which sticks with the surface, ceases to stick. So, whenever you check whether your snail is dead or sleeping, you need to see if their body is sticking to the glass of the aquarium or not.

What to do with a Dead Snail?

It is hard to determine whether a snail is dead or not. So, once you discover that your snail is dead, then you should take him out of the tank. A dead snail can foul up the whole aquarium. Take it out immediately and change the water in your tank.

Sometimes, if kept untouched, a dead snail’s body separates itself from the shell. Fishes might eat the dead body of your snail.

Some Fun Facts about Snail

It can be confusing when you find your snail not moving for days. It would help if you acknowledged that sleeping for an extended period is a common trait in snails. They hibernate in winter and aestivate during summer (summer aestivation is uncommon in some snails).

Now that you know how to differentiate whether a snail is sleeping, dead or hibernating, you get to enjoy watching them in their habitat. You will notice their unusual sleeping patterns and wonder what other peculiar habits they have.