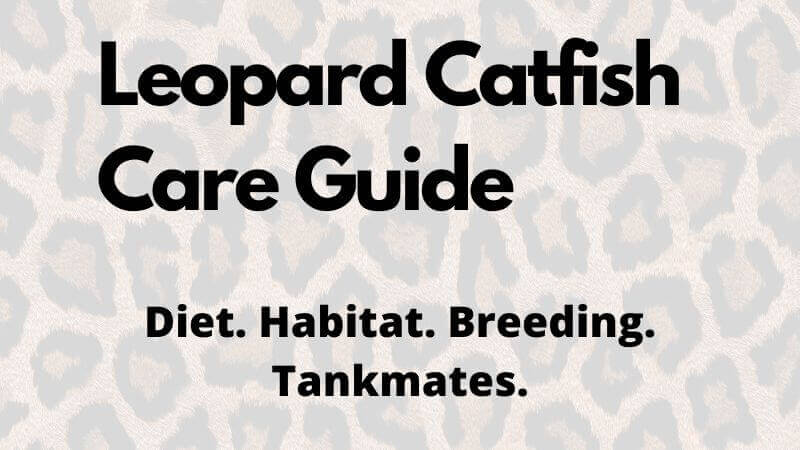 To be honest, I was dumbfounded when I typed in ‘leopard catfish’ on Google and came across a myriad of half-baked information. Took me 30 minutes to find out what fish is actually called leopard catfish.

So, if you’re looking up information for Corydoras julii, who also apparently goes by the name pygmy leopard catfish, this is not the article you want to read. By the way, let me know if you want it covered too.

This article is about Perrunichthys perruno, the real leopard catfish, which grows massive – over 20 inches. These fish are often confused with sailfin pimelodid (Leiarius pictus) and marble antenna catfish (Leiarius marmoratus) since they look somewhat identical.

Now without further ado, let’s cut to the chase.

Leopard Catfish At A Glance

Leopard catfish are not usually available in LFSs. They come into the US either through special orders or when brought in with mixed shipments.

Therefore, in most cases, they’re sold online directly from importers or through wholesale facilities in different sizes.

They are the only catfish species in the order Siluriformes of the monotypic genus Perrunichthys.

The catfish’s scientific name is Perrunichthys perruno. They are commonly known as leopard catfish. However, they also have a few other monikers.

Etymologically, the genus name is derived from Leios, which means smooth, and Arius, the Greek word for “dealing with Mars, warlike, bellicose.”

They’re named perruno after dogs, probably because of their unfussy and gregarious eating habits.

Leopard catfish can live past 20 years on average. They probably live longer than that in the wild.

Leopard catfish haven’t been evaluated. Thus, as of now, they aren’t kept on the red list.

There’s not much information available about their conservation status on the internet. So we don’t know yet if their population in the wild is dwindling or if they’re, in fact, an invasive species in other parts of the world.

Leiarius perruno (leopard catfish) are often confused with Leiarius marmoratus (marble antenna catfish) because they have the same coloration and look quite similar at first glance. The latter is most commonly encountered by aquarists.

The Leopard catfish is a chunky catfish with a wide, depressed head, a broad snout, and a big mouth with 3 sets of barbels. The upper jaw is somewhat longer than the lower jaw.

They have two sets of short mandibular barbels and long maxillary barbels extending almost to the caudal fin in adult specimens.

The fish has a deeply forked, large caudal fin.

Leopard catfish have a chocolate brown body with lightly colored reticulated markings across the body and fins. The long barbels, dorsal, and paired fins have the same color as the body in most cases.

However, in some fish, the fins have spots instead of reticulated markings.

Leopard catfish can grow up to 24 inches long. There have been reports that they grow much bigger than that in the wild. However, I think 24 inches is the most they can grow in captivity.

The sexual dimorphism between male and female leopard catfish is extremely subtle. Adult males are comparatively more slender than females, especially during the breeding season.

And that’s about it. They look pretty identical.

Leopard catfish have a strong predatory instinct. Therefore, they can get aggressive and territorial when sharing space or resources.

But frankly, there’s no information available at all about their temperament on the internet. Since they belong to the catfish family, there is a probability that they are peaceful and love to keep to themselves as long as there’s enough space.

However, since they’re predator fish, it’s best to not house them in the same tank as small fish.

As a matter of fact, it’s recommended to keep leopard catfish in species-only tanks. However, don’t keep them alongside small fish if you plan to raise them in a community tank.

Here’s a list of fish that can be good tankmates for your leopard fish, provided that there are enough space and hiding places in the tank:

Leopard catfish are carnivores. They mostly snack on smaller fish, river crab, worms, crayfish, and crustaceans in their natural habitat. These fish have a strong predatory instinct and can fast for long periods after consuming a big meal.

In the tank, you can give leopard catfish some fresh dead fish, mussels, prawns, earthworms, and crayfish. They’re even known to consume commercially-made sinking catfish pellets.

Leopard catfish are quite hardy. They make it through most beginner mistakes. However, they grow large and are quite particular about their water parameters. This can pose a problem if you’re new to the hobby.

Leopard catfish need a big tank – nothing less than a planted 150-gallon tank. For substrate, you can put mixed gravel/sand topped with a couple of large river rocks and big driftwood or bogwood pieces.

You can also add a couple of floating plants to provide shade for the fish.

The water parameters for leopard catfish should look something like this:

Although quite hardy, leopard catfish are intolerant of poor water parameters. Therefore, a sturdy filtration mechanism, coupled with frequent water changes, is required to keep harmful bacteria and parasites at bay.

We recommend using a powerful canister filter for that.

As of today, leopard catfish haven’t been successfully bred in captivity. This is because they reach maturity late and are very specific about certain water parameters.

In the wild, these fish breed between March and June when the temperature is within the 75-80 degrees F (24-27 degrees C) range. For some reason, they’re quite particular about the temperature.

If the water isn’t at their desired temperature range, they will simply not spawn.

Fertilization is external. The female lays hundreds of eggs on a flat surface covered in bubbles they produce. The size of the clutch depends on the female’s age and size.

The male then sprays the eggs with sperm to fertilize them. The eggs hatch in about 10-12 days.

Leopard catfish are no run-of-the-mine fish. They can’t make it just about anywhere. And they definitely aren’t suited for beginners.

They need a big tank. They have a voracious appetite. And they have very specific water requirements.

Moreover, they’re not easily available in the hobby. So, if you haven’t brought home one already, I’d recommend getting a smaller catfish.