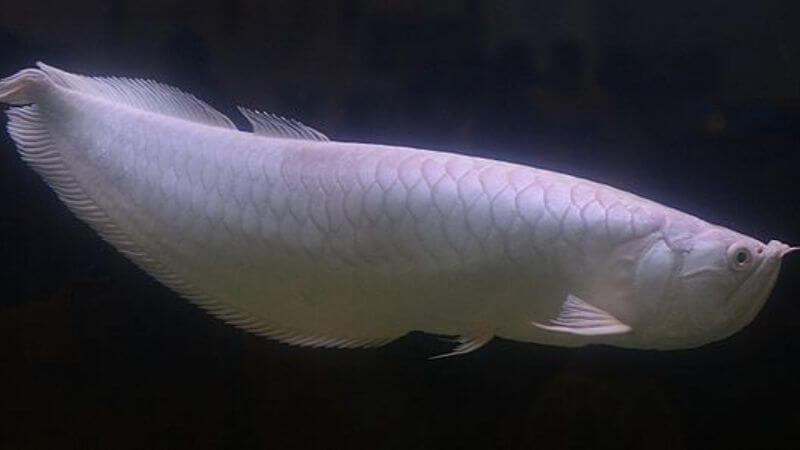 The most expensive freshwater fish I have ever bought are flowerhorns. I got a pair for 300 bucks back in 2019. Up until now, I thought they were super expensive. But I nearly jumped out of my skin when I got to know the price of some freshwater fish.

I could hardly believe my eyes!

In this blog, I’ll tell you about the most expensive freshwater fish to ever exist. I’ll then follow up with some honorary mentions that aren’t as expensive but equally ethereal.

What’s The Most Expensive Freshwater Fish?

The most expensive freshwater fish is platinum arowanas. Natives of South-Eastern Asia, the highest price ever paid for a platinum arowana was a whopping $400,000. This unbelievable price tag is credited to the fish’s endangered status and the illegal mafia trade that surrounds it.

Platinum arowana is the pearly white variation with a rare genetic mutation. In Asia, they’re believed to be the bearers of luck that bring good health and prosperity to the owners.

Even though Arowanas come in several colors like gray, gold, and silver, the platinum morph is the most stunning and sought-after variation. These giant, ancient-looking fish have unique upward-pointing teeth and large metallic scales.

Size-wise, these bony fish can grow as big as a tiny human in the wild – 3 feet.

They use forked barbels situated at the lower jaws to sense movements in the water as they swim.

Still, the most impressive and expensive trait of platinum arowanas is the unique color or lack thereof.

Because of their eccentric yet uncanny resemblance to dragons, they’re often revered as dragon fish in China and parts of Asia.

Also, these imposing creatures are aggressive, predatory, and of course, carnivores! So, raising them isn’t exactly a walk in the park.

Why Are Platinum Arowana So Expensive?

Do you know people in Asia have actually gone to prison over the fish?

Some fish have their own motorcades. And breeders protect their fish by building layers and layers of concrete walls.

However, it’s interesting that these fish were filleted and devoured until the second half of the 20th century.

Platinum arowanas swam their way into the aquariums only in the late 1960s. And today, these fish even go through cosmetic surgery to appear more beautiful and grab the highest bid!

They Are Believed To Bring Luck And Wealth

Superstition goes a long way back, but they seldom get as intense as believing a certain fish can change your life. In South-Eastern Asia, platinum arowanas are known to bring good health, happiness, and prosperity.
So, people go as far as kidnapping the fish, pressing criminal charges, and going to prison over it.

They Are Status Symbols

Besides showering you with all the supposed luck, these fish are also capable of catapulting you to the top of the social scene. Owning platinum arowanas is a status symbol, just like owning a car or a house.

They Are Incredibly Rare

Due to overfishing in the 70s and 80s, these fish have today become super rare. So you’ll hardly find them in the wild. And you know the drill with commodities – the price rockets!

How Long Do Platinum Arowanas Live?

Platinum arowanas enjoy a long lifespan. They can survive for more than 20 years in captivity! That’s way longer than most pet dogs.

There have even been unconfirmed reports of platinum arowanas making it up to their 50th birthday! I don’t really believe this, but there’s no denying that they’re a long-term commitment!

Now, let’s have a detailed look at other expensive fish!

Freshwater polka dot stingray is the most stunning fish to feature on our list today. Do you know this black and white stingray was once sold for $100,000? The mind-boggling price tag is partly because they’re now illegal to be exported from Brazil’s Xingu river basin (their home).

The polka dot stingray sold for the highest price was a genetically mutated variant with a U-shaped head instead of the typical round shape.

So interestingly, the fish had to be hand-fed. If the fish was to be left in the wild, it would have no chance of surviving.

The fact that this stingray is a freshwater species, unlike most others, also adds novelty to the fish.

Typically, polka dot stingrays have oval, black bodies covered in white spots. However, the underside is grey with no spots. The eyes protrude slightly, which allows them to see what’s above them easily.

These fish also have special sensing organs around their nose and mouths that enable them to detect electric fields produced by other fish.

Polka dot stingrays are among the most fierce aquatic species. So naturally, therefore, they’re often kept alone in tanks.

They have extreme jaw power that they use to devour prey – shells, bones, and all. And naturally, they have a poisonous barb along the tail they use to deter predators.

Plecos are ubiquitous in our home aquariums. We’ve all raised and loved them. But do you know there’s a unique variation of these unassuming bottomfeeders that can set you back hundreds of dollars?

While the common plecos we find at pet stores cost about $3-5, blue-eyed plecos will cost you around $150 for a youngling and up to $600 for an adult.

Unfortunately, I didn’t find the highest record price these fish were bought for, but $600 is still super costly, right?

To put it simply, blue-eyed plecos look stunning. I mean, how often do you come across a blue-eyed fish, right? Unfortunately, however, these fish are poor swimmers. And also, they won’t touch algae.

These fish are chunky compared to some other pleco species. The eyes are baby blue, while the body shade is between brown and grey – almost making it look like a wood log.

Once fully mature, they will develop thick bristly whiskers along the gills and barbs, giving them a bold appearance. They are known to grow over 16 inches long!

So, you’ll have to commit to a big aquarium.

This fish is rare because their home in Colombia is under the control of the Revolutionary Armed Forces of Colombia, a rebellious group opposing the government.

Blue-eyed plecos are primarily wood-eaters. And you can almost say they’re gentle giants. They’re peaceful to everyone except their own kind.

Also, they produce an enormous amount of waste. So, you will have to invest in a robust filtration mechanism!

Goldfish are the global ambassadors of the fishkeeping scene. They’re found practically everywhere. But do you know there’s one variety that’s so unique and rare that it can cost you up to $300 for a 2-inch fish?

Yes, I am talking about the Izumo Nankin goldfish coming from southwestern Japan. And you can hardly find them outside Japan. They are sourced rarely so as not to dilute the bloodline. Impressive!

First created in the 19th century, these fish have a triangular, dorsal fin-less form that emphasizes the bold back patterns. It’s a fabulous top-view fish that usually comes in white and red coloration.

Fish with both red and white coloration is the most sought after. However, all-red males are the most expensive since they lend more red coloration to their offspring.

And when you view from the top, the body resembles a perfect circle.

Besides the incredibly controlled supply, another reason you don’t see this fish in the United States often is because they’re pretty fragile and difficult to ship. If you ever get around ordering a pair from japan, your fish will most likely die in transit.

Although expensive, discus are quite commonplace in our home aquariums. These exotic cand stunning fish have sharp brains and distinct personalities.

What’s most loveable about these fish is their ability to recognize their owners and greet them whenever they come into the room! And I vouch for this claim! My discus sometimes even eats right out of my hands.

These Amazonian freshwater fish get their unique name from their flattened, round shape. And they come in an array of colors ranging from neon red to royal blue. The size clocks in around 6-8 inches.

What I like the most about these fish is their social temperament. They’re not anything like their angry cousins. Instead, they thrive the best in at least a group of 6.

The price for a standard young discus is pretty reasonable – costing you around $20. But a mated pair will easily cost you over $500!

So, that’s the wrap of our coveted list of the most expensive freshwater fish! And the title goes to Platinum arowana! This fish has once been sold for a record price of $400,000!

I think the beautiful platinum body, doting eyes, and massive scales very much justify the price!

Still, I find it hard to wrap my mind around this fact!