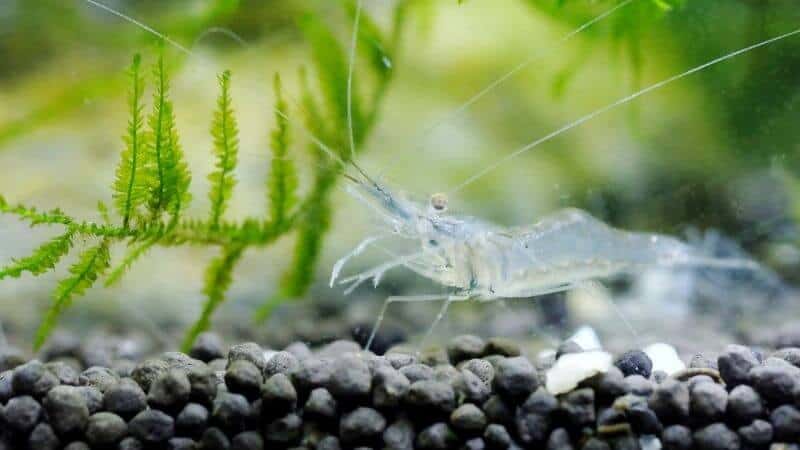 Ghost shrimps were named after their transparent and a little ghastly appearance. You should be able to see right through its body. But too often, we receive queries asking, “why my ghost shrimp turned white? Is it reversible? Is it going to kill my shrimp?” So, let’s find out what’s really the problem here.

My Ghost Shrimp Turned White! | Reasons Behind It

Usually, a ghost shrimp turns white when it’s getting ready to molt. Ghost shrimps also transform into a milky white color when they’re nearing the end of their lifespan. Additionally, diseases like muscular Necrosis and White Spot Syndrome (WSS) can cause them to turn white.

Now let’s explore these reasons in depth to see if these conditions are reversible or not.

A ghost shrimp’s exoskeleton usually turns white when it’s preparing to molt or is molting.

Molting is a lifelong, hormonal process that happens when the shrimp outgrows its current exoskeleton and needs to get rid of it to facilitate its growth and develop a new exoskeleton. The shell’s made up of protein, fat, chitin, and calcium carbonate.

Now, before we jump into why ghost shrimps turn white during molting, you need to understand the process that goes behind it.

In the pre-molting stage, a thin skin layer called hypodermis grows under the exoskeleton. Your shrimp will absorb a fair amount of calcium and other nutrients from the existing skeleton to grow this layer.

So, when hypodermis becomes hard enough, it will become visible, and the shrimp will look white—mainly because of the high presence of calcium content.

However, note that the shrimp won’t look completely milky when molting. You’ll simply see a thin, white layer underneath the exoskeleton.

And your ghost shrimp will almost and always hide during this process. If your pet is turning white but is not hiding underneath a rock or a plant, this could be a red flag.

How to Help a Ghost Shrimp Molt?

Although ghost shrimps molt every few weeks throughout their lifetime, this process could very well be marred by complications. To help a shrimp molt quickly and safely, you can keep a few things in check, such as the optimum water parameter, adequate diet reinforcement, and proper hiding places.

The water parameters should be as followed for ghost shrimps.

Usually, ghost shrimps are bred and kept in a low-maintenance environment since they’re reared to be fed as live food. Thus, they often experience health complications.

If you need to measure the water parameters, I’d suggest you go with the API Master Test Kit. It helps you accurately measure the pH, nitrate, ammonia, and nitrate levels in the tank.

Once the shrimp molts, it becomes very vulnerable to several infections and diseases until it grows a new one. This is the reason they prefer to hide instinctually.

And water plays an essential role in developing a new shell and keeping their immunity in check. Thus, you need to exercise a great deal of care with water temperature and ghost shrimps.

Ghost shrimps usually lose their appetite right before and after molting. During this period, you need to make sure that they’re getting enough protein and calcium content even if they eat sparsely.

You can give them live food, algae, blanched veggies, and biofilm.

However, they will eat quite a lot when they’re in the inter-molt stage.

All ghost shrimps prefer to molt in a secretive and quiet place away from the tank’s inhabitants’ glaring looks. This not only helps them concentrate better on molting, but keeps them safe from predators at this vulnerable point in life.

Thus, you need to make sure the tank has plenty of rooms to hide. It could be live plants, rocks, driftwood, or aquarium-safe decorations.

If your shrimp cannot find a suitable place to molt, that’ll cause it stress—heightening chances of molting complications.

Once your ghost shrimp nears the end of its life, the appearance will look increasingly white. By the time your shrimp dies, it’ll look completely white or pink, depending on the reason behind death. This time, the white appearance is accompanied by lethargy and unusual movements.

Shrimps have a very unpredictable lifespan, and the longest they can go is one year. And unfortunately, your shrimp turning white is the most obvious symptom that it’s going to die.

You can also gauge their behavior, like how much it is eating, if it’s lying still on the floor, or if it’s twitching.

This time, it’s irreversible to change back the color to transparent. However, you can check if the water parameters and dietary requirements are being met or not to ensure the wellbeing of other shrimps in the tank.

Muscular Necrosis is a lesser-known but a prevalent reason behind statements like “my ghost shrimp turned white.” This disease is characterized by destroying multiple cells in the shrimp. It is caused by conditions like bacterial infection and inappropriate water parameters.

If your ghost shrimp has contracted this disease, usually only the abdomen and tail areas will turn white. The destroyed cells will lead to inflammation, and the protein released from the infected parts will cause white coloration.

Once the abdomen area has become completely white, it’s a grave issue that can’t be treated at this point. However, there are a few things you can do if detected early.

Isolate the infected shrimp in a quarantine tank right away because muscular Necrosis is an infectious disease. Also, change the water in the main tank.

White spot syndrome is a deadly disease in shrimps characterized by white spots all over the body. If there are too many spots, it gives the impression that the shrimp is turning white. It is a lethal and contagious disease that’s usually caused by bacterial and fungal infections.

It’s a highly contagious disease that can kill your entire colony within a few days of the first outbreak. It wipes down entire shrimp populations in many places across the world.

Thus, there’s not much you can do to save your ghost shrimps at this point.

The least-explored and least-known reason behind ghost shrimps turning white is excess copper content in water. If the water has high copper traces, that’ll make it difficult for the shrimp to molt. As the hypodermis underneath grows denser and denser, the ghost shrimp will look increasingly white.

If you notice multiple ghost shrimps turning white, this could likely be caused by the copper in the water.

And as you already know, failing to molt can have deadly impacts on a ghost shrimp.

Do you know ghost shrimps can turn red, pink, orange, and even yellow? Now that we understand why a ghost shrimp is turning white, let’s look at some other reasons it changes color.

Why is My Ghost Shrimp Turning Yellow?

Usually, the yellow color in ghost shrimps is caused by the yellow tints in their food. This is not something to worry about too much, but you can always switch the diet to tailor it according to a ghost shrimp’s health needs.

Why is Ghost Shrimp Turning Pink/Orange?

If your ghost shrimp looks pink or orange like cooked shrimps usually look, it probably means that your shrimp is dead or will die soon. Ghost shrimps generally turn pink when they die.

Make sure to check if there’s any movement or not.

Why is My Ghost Shrimp Turning Red?

If your ghost shrimp is eating a big amount of red-hued food like bloodworms and micro pellets, the body can develop a slightly reddish color. However, if the color’s on the darker side, it can be caused due to an underlying health condition.

Keeping a thriving colony of ghost shrimps is neither a difficult nor an easy task. As long as you know the right buttons to press, you can be a proud owner of dozens of ghost shrimps.

A ghost shrimp turning white is a common occurrence, and the reasons behind it can range from something as harmless as molting to gory, like approaching death and viral infections.

If you notice your ghost shrimp has started turning white, first of all, confirm if it’s about to molt or not.

If it’s not molting, it means the white transformation is caused by underlying medical conditions like muscular Necrosis and white spot syndrome. Or it could simply be old age.

Nonetheless, always ensure adequate diet and right water parameters for your ghost shrimp to give it a quality life as long as it lives.

We hope the information and the tips given above will help you take better care of your ghost shrimps!