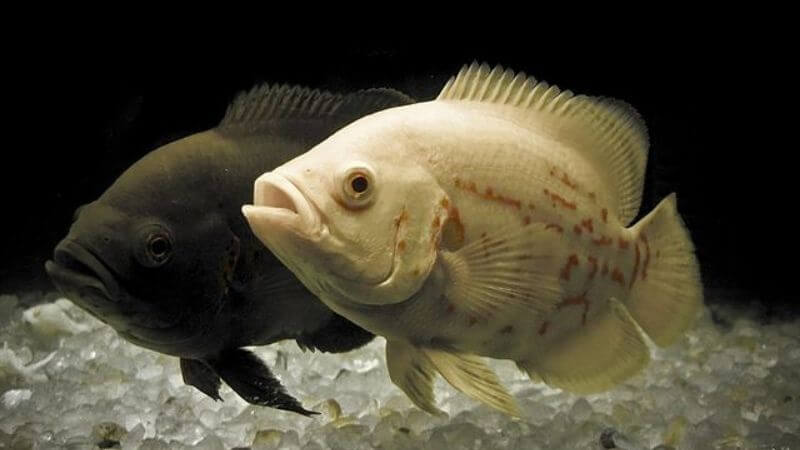 In today’s blog, I will shed light on a fascinating topic – oscar fish eggs. If you are looking to breed and raise oscars, you must know everything from how oscars breed to what stages the eggs and the fry go through. And that’s precisely what I’m to write about today.

So, let’s start without further ado!

When freshly laid, oscar fish eggs are white in color. They are slightly bigger than a salt flake – about a millimeter in diameter. But the following day or so, they start to look like a mini chocolate ball. Since the matriarch lays hundreds of eggs, it looks like someone just scattered some salt on the rock.

Once fertilized, the eggs slowly change color from white to tan. Those that aren’t fertilized will remain stark white and soon develop fungus.

Here’s an excellent video that chronicles the development of oscar fish eggs:

How Long Do Oscar Fish Eggs Take To Hatch?

Oscar eggs usually take around 3 days (72 hours to hatch). Right before the eggs hatch, you can see tiny tails sticking out of them. If you inspect closely, you can also see tiny dots for the eyes.

The rule of thumb is the warmer the temperature, the faster the hatching process. However, don’t raise the tank’s water unnaturally to speed things up.

How Many Eggs Do Oscar Fish Lay?

During one cycle, the oscar fish may lay anywhere between 300 to 3000 eggs. The number of eggs in the clutch depends on the female’s size and age. Usually, a smaller female will lay about 300-500 eggs at a time, whereas a mature, larger female can lay as many as 2500-3000 eggs.

Sorry if it sounds too obvious. But the female doesn’t lay that many eggs at once. She’ll lay eggs periodically in a batch of a few over a couple of hours.

Since oscars go through 4-5 reproductive cycles in a year, they’ll lay eggs 4-5 times. So we can assume they lay eggs once every two months or so.

When Do Oscars Reach Sexual maturity?

Typically, oscars reach sexual maturity and get ready to breed by the time they are 14 months old. At this point, they are usually 6-10 inches (15-25 cm) long.

However, this research here states that sometimes oscars simply refuse to mate even at 2 to 3 years of age.

Why Are My Oscar Fish Eggs Turning White?

When first laid, oscar eggs are white. But as they get fertilized and grow, they slowly develop a tan shade. If your eggs are turning white, it’s most likely the eggs were never fertilized in the first place or have developed fungus.

Oscars lay hundreds and thousands of eggs at a time. So, males often miss out on a few eggs here and there when fertilizing them. The sterile eggs will then soon begin to die. At later stages, these decaying eggs may also turn shades of brown or grey.

The Eggs Have Developed Fungus

If you suspect any eggs have been infested, you must remove them right away to lessen the chances of the fungus spreading to other healthy eggs.

The main reason for the eggs developing fungus is overcrowding, making it hard for the eggs to receive enough oxygen.

The parents will fan the eggs often, but that might not be enough. Proper aeration is the key here.

Adding a few drops of methylene blue to the water is known to keep fungus at bay. So, you can give it a try.

How To Tell If Oscar Fish Eggs Have Been Fertilized?

Closer to hatching, you can even see the fry moving inside their shell.

Can Oscars Lay Eggs Without A Male?

Yes, a female oscar fish is perfectly capable of laying eggs without the male’s presence. However, the eggs will not be fertilized. These infertile eggs will begin to slowly rot in a few days and develop fungus. The female will then either consume or discard them.

The Stages Of Oscar Fry Development

The eggs hatch in around 3 days. And when they hatch, they look like anything but fish. They have no fins, no eyes, and no mouth. In fact, only their yolk sac can be seen. On the top of their heads are three pairs of tiny glands that release a sticky filament that helps attach the fry to the rock.

After about 24 hours from hatching, the early larvae start developing incipient eyes. Tiny ridges and buds also form where the future fins will grow. Even at this point, there is no hearing, sight, or sensory capabilities.

On the third day, the mouth begins to form, and eyes become recognizable. The yolk sac at this point will be almost drained. But the fry will still be attached to the rocks with the help of sticky filaments.

At this point, the parents often rearrange the eggs into clumps.

In the next 5 or 6 days, the parents will move the larvae from pit to pit as they care for them. You can provide them baby brine shrimp, pulverized flake food, and microworms.

At around 10 days from hatching, the glands stop secreting the sticky filament, and the larvae become free-swimming fry. By the third week, they can easily consume flake foods.

Breeding oscar fish is relatively more complicated compared to some other cichlids. For starters, oscars are monomorphic. You cannot tell a male from a female by just looking at it. They have pretty much identical colors, sizes, and shapes.

In most fish, you can tell them apart by the shape and length of their fins, but that’s not the case with oscars. The only way to know is to examine the breeding tubes that only become visible during the spawning season.

In females, the breeding tube, also known as an ovipositor, is short, stubby, and the tip looks as if it has been sliced off. It is as long as it is wide.

In males, the breeding tube is about a third of the mass of the female’s tube. It is thin, curved, and comes to a point. Also, the length is far greater compared to its width.

To increase the chances of success, buy 6-8 juveniles, raise them, and wait for pairs to form. Once the pair is formed, they’ll stick with each other for life! How romantic, right?

However, females will only breed with males that they think can carry on their genes. If a female is not happy with a particular male, she will not mate with him even if he’s the only male present in the tank.

Once the pair is formed, the duo will engage in not-so-romantic courting behavior. You can expect lip-locking and tail-slapping, among others. If you notice that the aggression is one-sided, be sure to separate the pair. Otherwise, you may end up losing a fish.

When a pair is formed, it’s best to transfer them to a separate breeding tank at least 75 gallons big. That’s because oscars are highly territorial and will attack anyone they perceive as a threat or an intruder.

Also, you need to put more effort into the pair’s diet. Especially if the mother is inadequately fed, the eggs she will lay will be of inferior quality. Also, they may not hatch at all, owing to organ failure.

And all that feeding means you have to stay on top of water parameters. Install powerful canister filters that can tackle day-to-day gunk and perform 20-25% water changes weekly.

All in all, a nutritious diet, water changes, and elevated temperature encourage oscars to breed.

How Do Oscar Fish Breed And Lay Eggs?

Before breeding, the pair will go through a kind of dress rehearsal. They’ll flare their gills, spread their fins, and vibrate. They will also jaw their locks, shake, nip fins, and chase each other around the tank. This may look rough to us, but it’s a natural behavior.

2-3 days before breeding, the fish will stop eating. They will involve in some strange behaviors like digging the substrate and moving mouthfuls of gravel or sand from one place to another.

These fish prefer laying eggs on a flat surface. Therefore, you can provide a few flat rocks for their convenience. If there isn’t a flat surface available in the tank, they will clear a patch of gravel/sand until the bottom is exposed.

It’s impressive how meticulously they will clean the spot. In the end, there will be no trace of gravel/sand.

The actual breeding process begins after the female’s ovipositor descends. The male’s breeding tube will also appear extended. So, when the sexual organs protrude from underneath, you can expect the breeding to commence.

The female will then swim in circles over the selected spot and often rub her underside on the surface. Then after a few attempts, she will release the first batch of eggs. The male will then quickly follow her and release the milt over the eggs. Since the clutch size is large in oscars, this process can go on for hours.

Do Oscar Cichlids Care For Their Eggs And Fry?

Yes, oscars will care for their eggs and fry. They aren’t as doting as convicts or keyhole cichlids, but they won’t shy away from their parental duties. For instance, both male and female oscar will fan the eggs with their pectoral fins to oxygenate them. They will fiercely defend the eggs from intruders and eat away the damaged and unfertilized eggs.

Oscars are prolific breeders! They can lay anywhere from 300 to 3000 eggs at a time, depending on the mother’s size, maturity, and health! When first laid, these adhesive eggs look like tiny grains of salt.

In the next 24 hours or so, they will develop a translucent tan color and hatch around 72 hours after being laid!

Oscars aren’t really known to eat their young ones. However, we can never be sure. It depends from parents to parents.

So, if you are serious about raising the fry into adulthood, you should keep them in a separate fry tank. A 10 or 20-gallon tank with sponge filtration and vigorous aeration will get the job done!