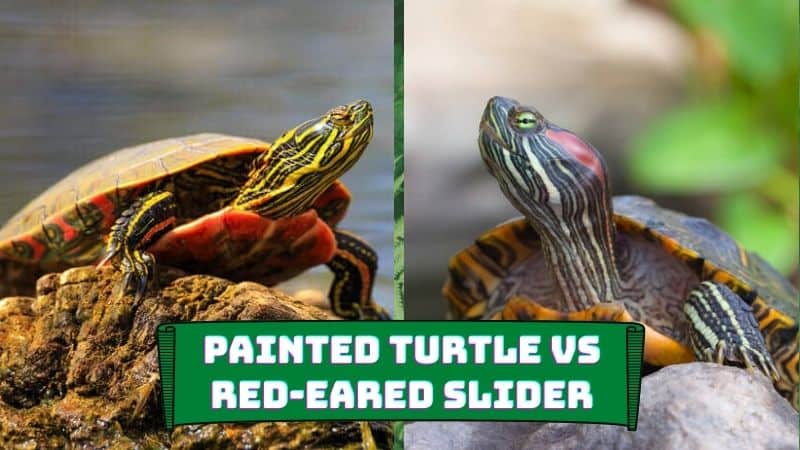 Greenish shells, claws, and tails – to a beginner, all turtles look the same. I know because I’ve been there.

But if you learn a few key differences to look for, in no time, you can confidently identify different turtle species.

Both Painted turtles and Red-Eared Sliders are America’s much-loved pet reptiles. Both immensely popular and beautiful – but is one better than the other? It’s time for a painted turtle VS red-Eared slider showdown.

The main difference between a Painted turtle and a Red-Eared Slider is the characteristic red marks behind each eye in Sliders. On the other hand, Painted turtles have beautiful red markings in their belly and bottom shell area. Other key differences include size, lifespan, origin, and color.

Although the competition is close, Red-Eared Sliders are the world’s most popular pet turtles. In addition to their striking look, they’re also quite hardy and can thrive in sub-optimal conditions.

And even though Painted turtles aren’t as famous, they more than make up for it. These docile and friendly pets come in four subspecies – each equally unique and special in their own accord.

As you can see, both painted turtles and Red-Eared Sliders share somewhat similar features and attributes.

Although they look identical at first glance, I hope you can now tell the difference by looking at subtle differences.

Now that the general overview of Painted turtle VS Red-Eared Slider is over, let’s dive into other important topics that’ll help you determine which one is the best for you.

If you’re wondering why these two species look so similar, you’ll be surprised to know that they’re, in fact, cousins. So besides a shared biological network, what do Red-Eared Sliders and Painted turtles have in common? They’re both tough, semi-aquatic species with a knack for pleasing people!

Both Are Hardy Species

Both of these pets are hardy species – one of the reasons they’re popular with owners of all agee levels. They can thrive in sub-optimal conditions and a low-maintenance environment.

However, owing to this very fact, we often see cases where they’re mistreated by owners.

Both Are Semi-Aquatic Species

Both turtle species live in shallow water with muddy bottoms in their natural habitat. Hence, they’re both semi-aquatic beings.

And since they can easily adapt to living in both land and water and transition without much hassle, both make great pets for newbie owners.

Both Love To Beg For Food

Both cousins love to beg for food – putting on quite a good show. They’ll also willingly eat from your hands. However, make sure you’re holding the turtle correctly. Both will also readily bite if they feel threatened.

Painted Turtle VS Red-Eared Slider – Who Has Better Temperament?

Painted turtles are docile and fun creatures. Some owners even describe them as having comical personalities. However, both male and female painted turtles have a streak of dominant personality in them.

Red-Eared sliders are described to have a mild temperament. They’re not the friendliest turtles in the block but only attack or get aggressive when they feel seriously threatened. They can also get a bit territorial if they have to share food or space in a small tank.

Painted Turtle VS Red-Eared Slider – Who Is More Suitable For New Owners?

As you can see, Red-Eared sliders are considerably bigger than their cousins. A female turtle can even reach 12 inches in length. A bigger turtle means a bigger tank. And a bigger tank means higher maintenance. So, for beginners, I’d recommend going with a Painted turtle.

The rule of thumb is 10 gallons for every inch of the turtle. If you’re raising a female Red-Eared slider, you’ll need a tank bigger than 100 gallons! I’ll be honest – for a beginner, that’ll take up a lot of time, energy, and resources.

Plus, you’ll need an extra-powerful filtration system, heating system, and so on. Therefore, you’ll be shelling out a lot of money.

Plus, Painted turtles have a slightly more docile personality that will be easier for a first-timer to handle.

However, it’s purely my personal suggestion. I’ve seen first-time owners who’ve had a hard time with even small turtles and those who’ve tasted great success with their first-ever Red-Eared Slider.

In the end, it’s your call! If you’re willing to put in a little extra money and time, Red-Eared Sliders make amazing pets, too.

Can Painted Turtles And Red-Eared Sliders Live Together?

Turtles have a hard time getting along with members of their own species – let alone someone from a different family. They’re incredibly stubborn creatures. However, both Red-Eared Sliders and Painted turtles can learn from past experiences. Thus, they can definitely be trained to live together.

Also, both are known to be territorial. So, if you have a small enclosure, you’re just inviting fights and aggression. That’s why you need to invest in a big tank that can provide enough personal space for both of them.

Here’s a 150-gallon tank from SC Aquariums that’s a pleasure to look at. I’ve been eyeing it for my own turtles for too long now!

However, just adding a big tank isn’t enough. You need to take care of a few other things as well.

For instance, try to set up basking and feeding areas at opposite ends of the tank to avoid confrontations. If the situation gets out of hand, you can use a divider to deescalate the situation.

Since it’s clear in appearance, it allows up to 92% light transmission and won’t mess with your tank’s aesthetics, too.

Here are few other rules you need to heed if you want to keep Red-Eared Sliders and Painted turtles together:

You also need to be super-mindful when deciding the gender of your pet. Male turtles don’t often get along – so that’s not a great idea. They’ll fight over just about everything. Females and males don’t really go together as well. Females will often be at the receiving end of the male’s harassment.

However, the success rate is quite high in female-only turtle tanks. They don’t really fight unless the living quality is really poor.

Don’t ever add a wild-caught Red-Eared Slider or Painted turtle into the habitat. Wild-caught turtles are often too dominant and hostile towards the comparatively passive captive turtle. Also, you never know what diseases and parasites they’re carrying.

Lastly, when you add a new turtle to the tank, you need to be super vigilant and ensure both creatures’ wellbeing.

I assume, yes! I think Painted turtles and Red-Eared Sliders mate in the wild. Since their natural region overlaps quite a lot in the American Northeast and Southeast, I believe this might occasionally happen.

I dug around some turtle forums, and a number of turtle owners confirm this.

However, this kind of behavior is seldom present in captive turtles. Among pet turtles, I’ve never seen the two mating – just like I’ve never seen a red-Eared slider and painted turtle mix baby.

It’s important to note that although exotic, hybrids often don’t give birth to genetically viable offspring. So on many occasions, their offspring are marred with disabilities.

This isn’t fair to any turtle – thus, the turtle community at large disregards this kind of practice.

So, to conclude, both Red-Eared Sliders and Painted turtles make great pets. If you were hoping that this article would be some kind of competitive showdown, sorry to disappoint you.

In terms of physical appearance, they’re not too different from each other. A few distinct characters, like the dome’s shape, their size, and of course, the Red-Eared Slider’s signature red marks, will help you differentiate between the two.

As for personality, they’re not too distinct from each other. Both of them have mild temperaments but will get agitated when mishandled and intruded.

However, since Red-Eared Sliders are a lot bigger in size, it can be tougher for a new owner to raise one.