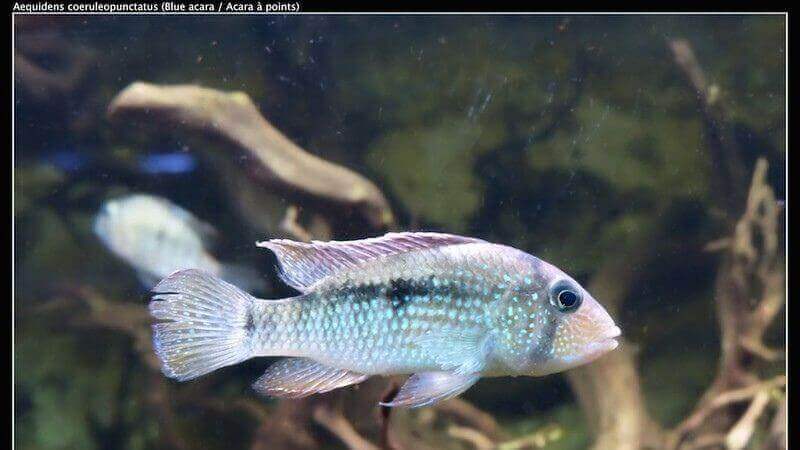 Peaceful and cichlids. It’s easy to think these two words don’t go hand in hand. This is because there’s so much stereotype surrounding cichlid behavior and temperament. And for the most part, these presumptions are true.

But there are at least 1,650 identified species of cichlids. And luckily, a handful of them have a calm demeanor and subdued personalities. Yes, you read that right!

These cichlids can level up your tank’s aesthetic by multiple folds without compromising the tank’s harmony. So your options for your community tank aren’t just limited to placid species like guppies and tetras.

Multies seldom top the popularity chart in the fishkeeping scene, but they’re one of the most disciplined African cichlids to exist. These fish usually keep to themselves and love to play with shells.

They’re non-aggressive and have a solid affinity for shells. They burrow sand to move shells, hide in shells, and even breed in shells.

So naturally, they will appreciate a sandy substrate complete with a lot of shells. So you can keep them paired with other peaceful fish who enjoy the same water parameters as they do.

As peaceful as they are, multies have a slight disposition towards defending their territories. But given their small stature, their domains are almost always small – so this shouldn’t be a problem.

Suitable tankmates for multies include open-water species like Cyprichromis and rock dwellers like Neolamprologus brichardi and Julidochromis.

African butterfly cichlids are as pretty as their name. On top of that, they’re shy, peaceful, and gregarious. Thus, you need to raise them in a group of eight or so if possible.

They’re known to peacefully coexist with fellow African cichlids of mellow temperament. But given their subdued nature, you should not pair them with aggressive Mbuna species.

Calm and restful most of the time, these cichlids display their territorial and semi-aggressive side during mating season. Otherwise, they swim quietly in the bottom of the tank and dig through the substrate for fun.

As juveniles, these fish have a drab color instead before transforming into deep-colored adults. Thus, they’re often overlooked as candidates for a community tank.

Humphead cichlids are gentle giants. They’re tolerant and have a very calm temperament. They’re pretty well-behaved, too – making them perfect candidates for tanks with caves, rocks, and plants.

These cichlids have a knack for guarding their territory, but this personality trait usually only comes out during the breeding season.

However, note that they require a big tank – 150 gallons or above. Thus, they can be quite a commitment.

Some suitable tankmates for humphead cichlids include blue dolphin cichlids, loaches, and plecos.

Kribensis are dwarf cichlids and one of the smallest species available in the trade. Thanks to their highly peaceful nature, these cichlids are a fan favorite for a community tank.

Also, since these cichlids require a tiny surface, they won’t partake in territorial feuds.

Kribensis fish do demonstrate a certain level of aggression during the breeding season since they make doting parents. However, even their fiercest anger will be subdued in front of more giant species – so there shouldn’t be much problem.

Angelfish are one of the most commonly seen fishes in a community tank. They just don’t look good but are also easy-going. They’re generally peaceful and friendly – thus, there shouldn’t be any kind of animosity breeding against them and other community inhabitants.

However, there’s a catch. They can be a bit hostile towards members of their own species – especially when trying to form a pair and breed. But as long as there’s enough space for everyone in the tank, the situation in the tank will remain peaceful.

Some suitable partners to go with angelfish are rainbowfish, larger tetras and rasboras, and peaceful barbs.

Cockatoo cichlids are yet another popular choice for community aquariums, given their mellow personalities. They’re even suited in tanks with bigger and peaceful fish.

During mating season, if there are numerous males present, things may get quite heated. They might get territorial. But otherwise, they’re primarily peaceful and shy.

However, they’re also prone to stress if the other tank inhabitants are very active and aggressive.

As cockatoos are mid to bottom-dwellers, you can easily keep with upper tank-dwelling fish. This way, they will seldom interact with each other.

Bolivian Rams make an appearance in almost all lists featuring peaceful cichlids. This is because these fish are non-aggressive and pair wonderfully with the most peaceful species.

They’re inherently quite shy and won’t barge into other’s territory or pick up fights. On top of that, they only grow around 3 inches in size – so they aren’t a threat to most other fish species.

But the only time they show their angry side is during mating seasons if intruders come too close to the breeding area. And although they aren’t schooling fish, Bolivian ram do prefer the company of their own kind.

They thrive the best in large tanks with plenty of decorations. These golden-brown fish with multicolored highlights will surely make your tank look great.

Besides the striking electric blue color, blue acaras are best known for their peaceful and reserved demeanor. However, they are also sometimes known to bully fish of smaller stature.

Thus, they are best suited for community tanks housing other peaceful fish of sizes similar to them. Some compatible tank mates for blue acaras include moga cichlid, rainbowfish, cory catfish, and discus fish.

These fish are outgoing, social, have excellent coloration, and have a voracious appetite – making them top choices for any community tank.

A tank featuring plenty of decorations and plants will keep them happy and occupied for a long time.

Rainbow cichlids are peaceful and non-aggressive fish that should be kept along with other friendlier and similarly-sized tankmates. As their moniker suggests, these fish are incredibly colorful and are a visual asset for any tank.

These fish do get territorial if there’s not enough space in the tank.

Also, they can get aggressive during spawning, but then again, almost all fishes do during that time of the year!

All in all, rainbow cichlids make quiet, harmonious, and colorful additions to any community tank. Some suitable tankmates for them are medium-sized cichlids like parrots and firemouth, as well as plecos, deep-bodied tetras, and medium-sized barbs.

Keyhole cichlids have a rather timid personality – thus, they’re not aggressive or too territorial. Their friendly nature makes them ideal candidates for a community tank.

These fish are even-tempered and quite shy. And they prefer swimming only around the middle part of the tank in the company of plants and decorations.

And they are not known to burrow the substrate or nip on plants.

You can pair keyhole cichlids with other cichlids of similar temperament like ribulatus and green severums.

But these cichlids are known to prey or crustaceans and small fish like tetra. So, make sure to keep that in mind when choosing its tankmates.

And like most fish, they channel quite a bit of aggression during the breeding season.

Aggressive Cichlids To Avoid For A Community Tank

Not all cichlids are made equal. Some are more aggressive than others – ever so often resorting to bullying and tormenting – making them a nightmare in a community tank.

Some aggressive cichlids to avoid for a community tank include:

If you’re interested to know how to effectively put an end to your cichlid’s anger problems, don’t miss this article!

And before you go, don’t forget to check out some possible reasons behind your cichlid’s aggression.

Why Are Cichlids Aggressive?

In most fish, aggression is caused by external factors – primarily environmental ones. With cichlids, things are a bit different. They’re hardwired by nature to be aggressive and hostile. That being said, some common reasons your cichlids become ruthless are territorial aggression, breeding behavior, and competition for resources.

Cichlids need a lot of space – and there’s not much you can do about it. Even the smallest cichlid can grow up to 4 inches long, with bigger species reaching almost a foot or more when fully grown. So we suggest nothing less than a 55-gallon tank. If possible, go for bigger ones.

Most cichlids are territorial and need their own designated space or area in the tank to cohabitate without any feud. So, naturally, if you have a small tank, there’s bound to be many angry confrontations – which will manifest to biting and nipping before you know it.

It’s often recommended to overstock the aquarium to manage aggression in certain cichlid species. Yes, it’s an entirely reasonable solution – but most people tend to go overboard and place too many fish in a single tank.

You need to overstock your aquarium in a very controlled fashion because there’s very tiny room for errors.

An overpopulated tank also means the fight over resources, enormous bioload, and dirty water – and all of these 3 factors can bring about aggression in cichlids.

Many, if not all, creatures in the animal kingdom tend to get aggressive during the breeding season – and cichlids are no different. In cichlids, things can get so heated that the only possible outcome is the death of sub-dominant males.

The number of fights and confrontations will significantly increase during the breeding season as males compete to win the attention of gravid females.

Even your most docile cichlid will get combative and intolerant of intruders and competitors during the breeding season. Thus, the key here is to raise a harem of 1 male and many females together.

Cichlids are hardwired to be aggressive. On top of that, the slightest inconvenience in their environment can boil their blood in no time. But luckily, there are some placid and well-mannered cichlids that do exceptionally well in a community tank.

We hope the above list will be helpful for you.