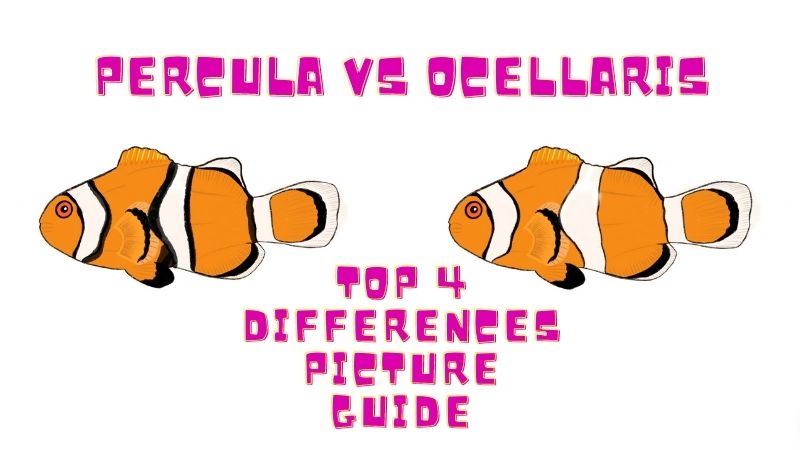 There are around 30 clownfish species divided into subgroups known as ‘complexes.’ And percula and ocellaris clownfish are the only two species that fall under the ‘percula’ complex.

At first glance, these two fish look pretty similar. It’s hard to tell the difference for untrained eyes. And I wouldn’t blame them.

However, if you observe closely, a few subtleties set them apart.

In this blog, we will discuss what similarities and differences these fish share.

The following illustrations will help you tell them apart quickly. A screenshot might come in handy!

Now, let’s look at these differences in detail below.

Percula clownfish have 10 dorsal spines. These are the thin spines in the fin on the very top of the fish. On some occasions, a percula may only sport 9 dorsal fin spines, but most commonly, they have 10.

On the other hand, ocellaris clownfish have 11 dorsal fin spines. Of course, they sometimes only have 10 spines, but 11 is the most common number.

Also, note that the back part of the dorsal fin is generally taller in ocellaris clownfish than it’s on perculas.

Observing the black outlines around the white bands is the easiest and most obvious way of telling the two fish apart.

Perculas have thick black outlines around the white bands that are quite prominent. According to some hobbyists, this is the true standard of clownfish.

The coloration and patterns can vary profusely depending on one fish to another, but the black outlines’ thickness gives it away in 9 out of 10 cases.

Perculas have thick orange rims around their pupils, resulting in an orangy look. On the flipside, ocellaris clownfish have darker eyes – just a hint of orange more grayish-black pigment.

In the wild, ocellaris clownfish are predominantly found in waters surrounding Andaman and Nicobar Islands, Philippines, Indo-Malayan Archipelago, Northwest Australia, and the coast of Southeast Asia northwards to the Ryukyu Islands.

These 4 pointers are the major differentiators between percula and ocellaris clownfish.

Hobbyists often report these fish are different in terms of size and temperament as well. Other things held constant, it’s believed that perculas are smaller and have a more feisty character.

But both these traits differ from fish to fish. I’ve seen bigger but peaceful perculas and smaller but aggressive ocellaris, too.

There’s no noteworthy difference between these fish regarding size and temperament. As a matter of fact, these two factors largely depend on the environment they’re being raised in and the food they’re being fed.

When I was researching for this article, I scoured through many forums to find out what other hobbyists have to say about the differences present between these fish.

And I thought it’d be nice to pool together all those relevant responses here so you can form a well-informed opinion.

Percula VS Ocellaris Clownfish | What Do People Think?

Note: All the responses shared below purely belong to their respective authors.

“In my experience, perculas have a better color pattern than ocellaris clownfish. However, they’re also a little more aggressive.”

“I have raised both; I like them both for different reasons.

Perculas have cool stripes and black borders. The eye color is also neat. It’s super fun to watch him beg for food. The only downside is he doesn’t explore around much.

On the other hand, ocellaris clownfish are way more energetic and curious. When I first bought him, he was drably colored. Two months in, he’s oranged up and is super bright.”

“Ocellaris clownfish have a muddy coloration around the black rim of its eyes, while perculas have a clear color ring.”

“True perculas grow larger than ocellaris clownfish and are more aggressive, but they’re not as hardy for the most part.”

“I personally like the perculas better. It’s just my own personal taste. And I think the terms’ true’ and ‘false’ are kind of silly and used a lot less lately – mainly by people who don’t know how to spell ocellaris!”

“Don’t read too much into that ‘false clownfish’ thing. It’s just a name. These two are close cousins. Their attributes and behaviors are the same. And they can even hybridize.”

“The dorsal fins on perculas are shorter and more rounded.”

“Some report that ocellaris clownfish are friendlier and hardier than perculas, but there’s no concrete evidence.”

“Ocellaris clownfish are hardier than perculas as they are primarily bred in captivity.”

Now that we have explored and discussed all the possible points of differentiation, let’s look at some of the similarities.

Percula VS Ocellaris Clownfish | The Similarities

Truth be told, most saltwater aquarists have a favorite among these two – and it’s the percula clownfish, thanks to its pronounced color pattern.

However, these two fish are almost identical in all other departments. Their temperament is practically the same, and they have the same preferences for anemone and coral species as hosts. In fact, they can also interbreed perfectly fine.

Let’s have a quick look at their environmental needs.

As you can see, both species require almost identical water parameters, although their geographical distribution overlaps slightly.

I’ll now answer a couple of frequently asked questions before touching on the general care required for these two equally adorable species.

Is Nemo A Percula Or Ocellaris Fish?

Nemo from Pixar’s Finding Nemo is based on ocellaris clownfish, also known as false percula clownfish.

As you can see in the photo above, Nemo has pretty thin black outlines around its three white stripes. Therefore, we can conclude that Nemo is an ocellaris clownfish.

However, it turns out Nemo doesn’t sport dark eyes as his natural counterparts do. I think it’s got something to do with the cartoon fish’s overall aesthetic appeal.

Nevertheless, Nemo is an ocellaris clownfish.

Can Ocellaris And Percula Clownfish Live Together?

Although ocellaris and percula clownfish come from different corners of the world, they can cohabitate without any qualms in the same tank. That’s because they have almost the exact water parameter requirements, temperament, diet, and potential size.

The general consensus is that perculas are more aggressive than ocellaris clownfish. The rationale behind this assumption could be that perculas available to us are often caught in the wild, whereas ocellaris are captive-bred in most cases.

It would be wrong to label any of these two species as aggressive fish. Instead, this term should be reserved for other assertive and hostile family members like maroon or pink skunk clownfish.

At best, both ocellaris and percula clownfish are semi-aggressive. In most cases, they only show their mean side if their environment is unsuitable.

Like any other fish, they also tend to get somewhat unmannerly if there’s not enough room to swim, they’re spawning, or if there’s a lack of resources.

Also, don’t forget to note that irrespective of whether it’s a percula or ocellaris clownfish, wild-caught specimens are grouchier than captive-bred fish.

And it’s only perfectly natural. They’re used to endless swimming space, a rich natural diet, and a beautiful symbiotic relationship with anemones in the wild.

Out of the blue, if a fish is netted, packed, transported, and confined to a small tank, it’s only fair that the fish becomes belligerent – at least, initially.

Lastly, female clownfish are known to be assertive, whereas breeding male and sexually immature males are known to display ‘appeaser’ behavior.

Both percula and ocellaris clownfish are omnivores that enjoy a varied and well-rounded diet in the wild. In their homes in the reefs, they continuously graze on algae to their fill and then snack some more on planktonic fish eggs, fish larvae, isopods, zooplankton, polychaete worms, and small invertebrates.

If your fish is a wild-caught specimen, it might resist eating processed food like flakes and pellets initially. So, you’ll need to put in some extra effort to curate a diet for them.

Here’s a list of food you can give them in captivity:

Adult percula and ocellaris clownfish should be given two moderate-sized meals every day. However, younglings and juveniles should be fed more frequently.

Juvenile clownfish should be given 4-5 small meals per day. During this formative stage of their lives, these fish are quite prone to malnourishment and starvation.

And naturally, these could lead to stunted development and even death in some cases.

The best anemone for percula and ocellaris clownfish are:

The aforementioned anemones are compatible with both percula and ocellaris clownfish. However, you should always thoroughly research the anemone’s needs and tendency to see if it corresponds with your fish or not.

One small mistake, and your fish can bite the dust. For example, some varieties like the Condy Anemone (Condylactis gigantea) are mobile and have a strong carnivore instinct.

Their sting is a lot more potent than what your percula or ocellaris clownfish can tolerate.

My ocellaris clownfish always makes a point to offer the food I disperse in the tank to its host anemone. I have kept magnificent sea anemone alongside the clownfish.

While it’s not mandatory that you should house anemone alongside your clownfish, if you do, you will get the rare chance of observing their interspecies friendship firsthand.

That being said, if you’re a novice at saltwater tank hobby, I would suggest not adding anemones at all. Unlike clownfish, anemones are high-maintenance. Thus, they demand a good extent of care and time to sustain and flourish.

Percula and ocellaris clownfish are close cousins. Both of them fall under the percula complex.

At first glance, they may look identical to untrained eyes. However, once you pay attention, the subtle differences begin to show.

The main differentiator is the thickness of the black lines surrounding the white bands. In percula clownfish, these lines are thick, whereas ocellaris clownfish sport thin black lines.

Likewise, perculas have 10 dorsal spines, while ocellaris clownfish have 11.