How To Care For Pregnant Black Molly Fish? 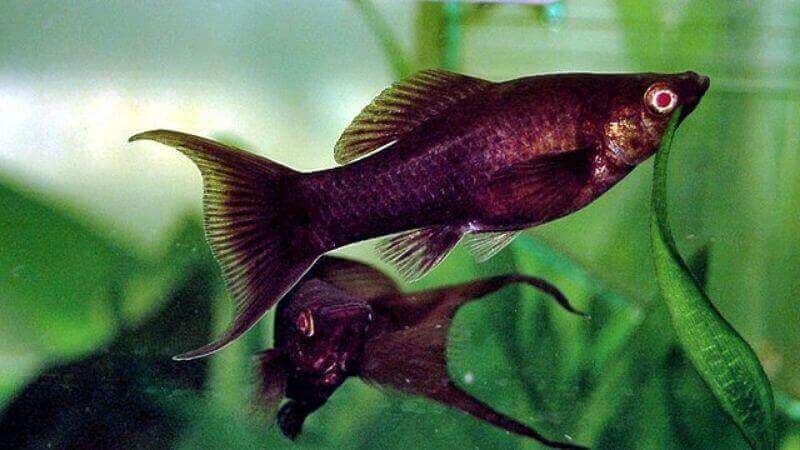 Black mollies are prolific breeders. From what I have heard and read, they can give birth to over a hundred fry in one breeding season. Although black mollies are as hardy as they come, they require special care during pregnancy. Otherwise, your pregnant black molly fish will deliver premature fry that won’t see the light of the day.

So, in this blog, I will tell you all there’s to know about pregnant black molly fish.

But before we start, watch this short video of a black molly fish giving birth. So fascinating!

How Long Are Black Molly Fish Pregnant For?

Like the rest of the molly types, Black mollies are pregnant for anywhere between 40-70 days. Their gestation is quite long compared to other tropical livebearers like guppies and swordtails.

For instance, they’re pregnant for twice as long as guppies, whose gestation lasts around 21-35 days.

A black molly’s pregnancy duration is dependent on various factors like the fish’s age and size, the water condition, diet, and stress levels.

And just like mammals, black mollies can give birth to premature fry they have either miscarried or aborted.

How Often Can Black Molly Fish Get Pregnant?

Black mollies are prolific breeders. They can reproduce as frequently as once every 30-45 days. But once again, the frequency is subjective to variables like age, size, experience, diet, and stress level.

At What Age Can Black Molly Fish Produce Babies?

If you are not looking forward to tiny fry overrunning your tank, it’s best to separate the males and females before they reach sexual maturity.

Let me quickly tell you how to tell a male and female black molly apart.

Is My Black Molly Male Or Female?

Here’s a quick image for reference.

Females are also a tad bit larger than their male counterparts.

Can Black Mollies Give Birth Without Male?

Yes, black mollies can definitely give birth without a male present in the tank. That’s because females can store sperm inside their system for months from previous copulation.

And even if there’s no male present in the tank, she can use the stored sperm to fertilize her eggs and produce babies.

So, don’t be surprised if you see little black molly fry appear one sunny day in an all-female tank.

How Many Babies Do Black Molly Fish Have?

Black mollies can have anywhere between 40-100 fry in one spawning session. Inexperienced new mothers usually give birth to a fewer number of fry.

However, as she matures and has a knack for being pregnant, the brood size will increase.

So, the age and size of the fish definitely play a pivotal role in determining the number of babies they will produce.

A black molly fish’s pregnancy journey – commencing from copulation to the birth of the fry – can be broadly divided into 5 stages. They are:

Mollies breed readily. If fish of both sexes are present in the tank, know that the little fry will arrive soon. Mollies form polygamous pairs.

Males will fertilize any female possibly can. As a matter of fact, they will even try to fertilize females that have already been previously fertilized.

Also, the males tend to harass and bully the female into conception. Unfortunately, that’s just how it works – there’s not much you can do about it.

Once he’s successfully coaxed the female, he will release milt – a fluid containing sperm – from his gonopodium into the female’s opening.

The eggs that are fertilized will develop into embryos. Those that weren’t fertilized due to low calcium levels will retain the original translucent yellow color and round shape.

The unfertilized eggs will either be ‘aborted’ separately or when your black molly’s giving birth. And this is what gives the impression that the molly’s laid eggs.

After 7-10 days of fertilization, you can somewhat see the embryo’s development through the thin walls of the gravid spot.

As the embryos develop into little fry, the black molly’s body expands to accommodate their growing size. For example, the volume of the abdominal region can increase as much as 25% within just one week.

Each little embryo/fry is equipped with nutritive elements the mother’s system initially provides. They rely on it for their nutritional needs.

As the fry develop, you can see tiny black dots for the eyes through the thin areas of the gravid spot.

In this stage, the black molly will prepare herself physically and mentally to give birth.

Just a couple of days before delivery, she will develop a prominent bulge below the gills, which will make her outline appear square instead of rounded.

The gravid spot will also look more prominent than ever.

Ready to come out, the perfectly formed fry will lie in a semicircular position.

The delivery process can last anywhere between a few hours to a couple of days, depending on the number of fry your black molly has.

The fry are birthed one at a time – their tail coming out first.

Once out, the fry will naturally fall a few inches through the water but quickly straighten out and head for cover to protect itself. Amazing, isn’t it?

If there’s no hiding spot nearby, the fry will resort to sinking to the bottom, where they’ll take refuge in the sand and rocks. They may lie motionless for a brief moment as they collect some strength.

You must remove the mother from the breeding tank as soon as she gives birth, as black mollies are known to eat their own babies! Yikes!

The five important signs of a pregnant black molly fish are:

As the female black molly’s body makes room for possibly a hundred offspring, her body will unmistakably swell and develop a rounded appearance.

She will appear almost chubby – especially in the belly area.

However, when the delivery of the fry becomes imminent, the matriarch will develop a strong bulge right beneath the gill that will give the area a squarish appearance.

A typical molly’s temperament is friendly and sociable. However, a female molly will appear increasingly aloof and irritable when expecting.

She will grow intolerant of nosy fish and may even resort to aggression to show her displeasure. But, mostly, she will prefer to keep to herself.

A few days before the due date, she will hide around a lot more than usual as she scours for a peaceful and secluded area to give birth.

A Change In Appetite

Mollies have a big appetite, to begin with. However, a pregnant molly will eat more than usual. After all, she needs enough energy to compensate for all the changes happening inside her body.

However, towards the end of the pregnancy, she may lose her appetite and refuse to eat. She will show no interest even when you’re offering her favorite food.

If this happens, know that the fry will be arriving soon.

However, unlike in mammals, the egg’s not attached to the black molly’s body and fed by her directly.

The gravid spot grows bigger and darker as the pregnancy progresses, but it may not be visible right off the bat in black mollies.

An Increased Affinity For Warmth

Pregnant mollies need to remain under a uniform temperature for the entirety of the pregnancy – preferably between 77-80 degrees Fahrenheit.

If the temperature goes any lower than 68 degrees Fahrenheit, it can lengthen the gestation period, which can be risky for your black molly.

Therefore, if you find your molly constantly hanging out around the tank’s heating system or temperature stabilizer, this could mean your molly is expecting.

And if you use an overhead UV light for the tank, the pregnant black molly may also hover closer to the surface a lot more.

If your black molly fish shows any or combination of the above signs, such as a prominent gravid spot and reclusiveness, it could mean the molly’s pregnant. However, if your molly doesn’t appear aloof or distant but simply has a swollen look without a noticeable gravid spot, this could mean the fish is bloated.

If you suspect the latter is the case, fast your fish for some time. Next, break the fast with boiled and skinned peas. Peas are high in fiber, which will help ease your black molly’s digestion process.

The female’s age, size, environment, and stress level are crucial in determining the length of the gestation period and the number of fry she will produce. She can give birth to anywhere between 40-100 fry.

When pregnant, she will show physical signs like a prominent gravid spot and a swollen appearance. She will also become somewhat aggressive and eat more than usual.

Everything You Need To Know About Balloon Belly Molly

How Long Do Mollies Live? Extend Their Lifespan!

How Long Are Molly Fish Pregnant For? Twice As Long As Guppies!

What Do Molly Fish Eggs Look Like? Little Yellow Balls!