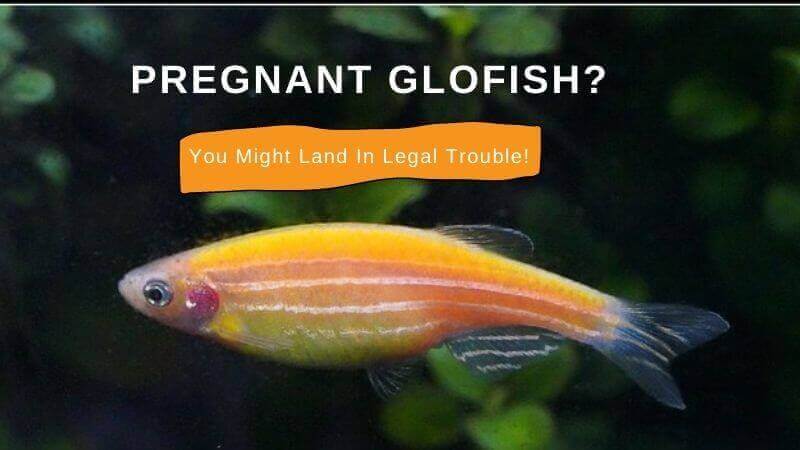 I initially thought glofish were sterile. So, I was pleasantly surprised when I found out they can produce perfectly healthy fry. And then I was kinda bummed to know you can’t intentionally breed these fish. Anyway, do glofish eggs glow too? What do they look like? How to care for a pregnant glofish?

So many questions and so little time. Let’s get right into it!

No, glofish cannot get pregnant because they aren’t livebearers. All five glofish species are egg-layers. So, a female carrying eggs is called gravid. Females will have to lay eggs, and males will have to externally fertilize them. Only then will the eggs yield fry.

However, most glofish species will eat the eggs once they’re laid. Therefore, eggs hatching and growing into adorable little fry is rare.

Also, from what I read on different forums, glofish are ‘risky’ reproducers that don’t breed readily in a hobbyist’s tanks.

But in the first place, is it even legal to breed glofish? Keep reading to know!

Is It Legal To Breed Glofish?

No, it’s not legal to breed glofish. The Glofish Fluorescent Fish license clearly states that intentional breeding and/or any sale, trade, barter of any glofish offspring is strictly prohibited.

If you were thinking of breeding these fish and making some extra cash, it’s a bummer, isn’t it?

I’d think long and hard before even gifting glofish offspring to my own family members. I don’t want to land in any legal troubles. Yes, I’m paranoid like that!

However, since these fish are not sterile, there’s a good chance that they will lay eggs in your tank sooner or later. And I hope this article will prepare you to care for them when the time comes.

But first, let’s get a few queries out of the way.

Turns out that glofish eggs look like regular eggs. No, they don’t emit any kind of glow. They also don’t come in bright colors like pink or blue as one would expect.

The eggs do contain fluorescent light-emitting genes passed on by the parents, but it doesn’t alter the eggs’ appearance.

Unfortunately, there are no pics of glofish eggs on the internet at the time of this writing. But from what I saw on a couple of videos, the eggs looked like white, translucent little balls – just like the regular eggs.

You can check out what they look like in this video:

Once again, the pictures of pregnant glofish are pretty much non-existent. The few images of supposedly ‘pregnant’ glofish available turned out to be that of obese fish.

However, the photos shared here, along with the question, are reported to be of a gravid female glofish. At least that’s what the commenters think.

If you are interested in some more photos, here’s the link.

How Long Does A Glofish Stay Pregnant?

Once again, glofish don’t ‘stay’ pregnant as they’re egg-layers. The duration of how long they’ll hold the eggs depends on the glofish species.

Usually, the gestation/egg-carrying period for glofish tetras last 2 weeks. The duration is shorter for glofish barbs, who reportedly carry eggs only for a couple of days – a week at max. Glofish bettas, sharks, and danios will carry eggs in their ovipositor for 1-2 weeks.

I must admit the answers shared above are ballpark figures. However, I have tried my best to answer as accurately as possible – looking into the profiles of the original species and evaluating from the answers shared by fellow hobbyists on different forums.

But note that the gestation period depends on several variables like the tank’s temperature, the female’s age, health, and size, the environment, and the stress levels.

Technically, glofish don’t get pregnant. But they carry eggs, and it’s known as the gestation period. During this time, female glofish exhibit some unique symptoms like a swollen and rounded appearance, a visible ovipositor, a change in appetite, and increased aggression.

A Distended And Swollen Appearance

Gravid glofish carry over 100 eggs in their body at a time. Therefore, it’s only natural for them to put on some weight. They will grow a prominent bulge around the abdominal area. The bloating is more easily noticeable when viewed from above than from the side.

A gravid glofish’s appetite will change more than usual. She will either eat voraciously or deter eating even if you offer her favorite food. She may also appear aloof and reluctant and prefer keeping to herself. She will even become aggressive if someone unwelcome is bugging her.

However, she will soon form a pair with a suitable male. For this, she will evaluate the bubble nests the male creates. If she likes it, the spawning will occur shortly after. And if she doesn’t think it’s up to par, she will destroy it – and the male will have to build a new one to impress her.

How Often Do Glofish Lay Eggs?

Glofish bettas, glofish barbs, glofish danios, and glofish tetras can lay eggs once every 2 weeks. However, glofish sharks don’t breed readily in a tank. They have very specific requirements. So, they will lay eggs rarely and sporadically.

Like the gestation period, the egg-laying frequency is also subjected to the fish’s age, health and size. The environment she’s in also plays a crucial role.

Related: What Do Glofish Eggs Look Like? Photos And Videos!

How Many Eggs Do Glofish Lay?

The answers were derived based on the number of eggs the respective original species lay.

Apparently, nobody has successfully bred rainbow sharks in captivity. So, there’s no chance I’d find any information on glofish sharks. Turns out it’s incredibly hard to get these guys to breed in captivity.

Even breeders are reported to inject pheromones in many cases to encourage them to breed.

The eggs aren’t laid in a single place. They are scattered all over the place. On top of that, since parents eat them, the eggs have a high mortality rate.

So, even though hundreds of eggs are laid, only a few will survive.

How To Take Care Of Glofish Eggs?

The first thing you should do after your glofish have spawned is removing the parents immediately. They’ll eat their own eggs at every chance they get. Also, note that the eggs do not hatch in the same way as chicken or reptile eggs do.

The eggs develop into tiny body parts as the yolk sac is consumed. And when they become free-swimming, you can feed pulverized flake food, baby brine shrimp, micro-worms, and daphnia.

The eggs take around 2-3 days to hatch. Reportedly, eggs hatch faster in higher temperatures. But it’s not advised to unnaturally increase the temperature, so they hatch fast.

After ‘hatching,’ they take another 2-3 days to become free-swimming.

Ideally, the fry tank shouldn’t be larger than 10 gallons. The bigger the tank, the harder it will be for the fry to find food.

A bare tank would make finding food easier as well. But many hobbyists recommend adding marbles for the substrate. They would provide tiny gaps for the little eggs to slide into and escape their predatory parents.

Do Glofish Eat Their Babies?

Yes, all 5 species of glofish eat their babies. Unfortunately, there’s no one concrete reason behind this. It’s been speculated that it’s a spillover effect of stress. Others think it’s a process of replenishing fat or weeding out weaklings.

Regardless of the reason, it’s super important that you remove the parents immediately after they’re done spawning, so the eggs have a chance at life.

Glofish are perfectly capable of getting ‘pregnant’ and yielding healthy fry. Just one thing – technically, they don’t get pregnant. That term is only reserved for egg-laying species.

However, glofish do become gravid. They carry eggs – hundreds of them – at a time.

But all 5 glofish species of glofish are known to eat their own eggs.

So, you’d really have to go to great lengths to save the fry and raise them into adulthood.

Also, it’s illegal to ‘intentionally’ breed glofish. Don’t try to sell or barter their offspring. You might land in hot waters.

How Big Do Glofish Danios Get? Is Your Danio Stunted?

How Many Glofish Tetras In A 10-Gallon Tank? There’s Bad News!