Saltwater Fish For 20-Gallon Tank | 9 Fish To Choose From 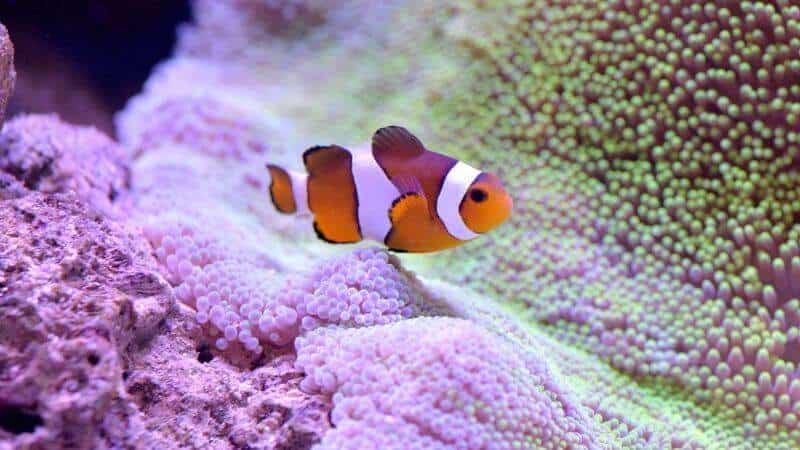 A 20-gallon tank could be a great starting point if you’re new to the saltwater fishkeeping hobby. The tank’s not big enough to overwhelm you every time you clean it nor small enough to fluctuate the parameters without warning.

Having said that, I’d still recommend stocking your 20-gallon tank sparsely if you’re dabbling in the saltwater hobby for the first time. But don’t get disheartened – there is plenty of beautiful, lively fish to choose from.

Let’s briefly look at what makes these fish so special and, most importantly, suitable for a 20-gallon tank.

P.S. If you’re looking for the best saltwater fish for a 10-gallon tank, don’t miss out on this article.

Clownfish are hands down the most easily recognizable saltwater fish to grace our tanks, thanks to uber-popular superhit, Finding Nemo. But do you know there are more than 30 different clownfish species?

Ocellaris clownfish grow around 4 inches long at max. They have the iconic orange body adorned with white and black stripes. Some specimens have rare color morphs such as pitch black or platinum.

These are peaceful fish for the most part but don’t get along with other clownfish. Therefore a tank as small as 20 gallons shouldn’t have more than 1 clownfish.

In the wild, they have an interesting, symbiotic relationship with anemones. They produce a certain mucus that prevents the anemones from stinging them.

One of the reasons clownfish are ubiquitous in saltwater tanks worldwide is that they’re incredibly easy to feed. They’re omnivores that readily eat both live and processed food.

Watchman goby, also known as yellow prawn goby, is an endlessly fascinating saltwater fish suitable for beginner marine aquarists. Its bright coloration and ability to thrive in a small tank make it a cult favorite.

Like clownfish, watchman gobies grow only around 4 inches long. Their bodies are colored bright yellow. The eyes are prominent and protrude like a frog’s, the mouth is broad, and there are neon blue flecks dotting the front part of the body.

Watchman gobies have friendly personalities, making them a suitable choice for most beginners. They’re reef-safe and peaceful. However, they don’t like living with fellow watchman gobies of the same sex.

So, you can only house one or a mated pair.

As the name gives away, vigilant watchman goby keeps an eye out for both parties as pistol shrimp have poor vision. In return, the goby gets to live in a burrow meticulously dug by the shrimp.

Watchman gobies are not picky about what they put in their mouths – one of the reasons they’re so popular among beginners.

Besides commercial fish food, they can have thawed frozen food like mysis and brine shrimp. Make sure the goby gets its fair share of food as it’s a bottom-dwelling species and quite timid.

These fish have a white body adorned with black stripes. They’re loved for their puppy eyes, pointed fins, and distinctly shaped bodies. But the best thing about these fish is their petite size – they only grow about 3 inches long.

Bangaii cardinalfish are reef-safe fish. They don’t pick at corals or other invertebrates kept in the tank. They’re peaceful and make good community fish.

They have no problem getting along with other peaceful and non-aggressive fish in the community tank. But bear in mind that they can be aggressive towards other members of the same species.

Therefore, you should only keep them singly or in pairs.

Bangaii cardinalfish are omnivores – so a varied diet will ensure proper nutritional balance. You can give a mix of pellets, flakes, and freeze-dried and frozen food.

Pajama cardinalfish, also known as spotted cardinalfish, is a mid-tank dwelling schooling fish from the western Pacific ocean. These fish love to swim in shallow ocean waters – from 3 to 50 feet.

Therefore, they will not be bothered by the smaller depth of home aquariums.

Although pajama cardinalfish only grow around 3 inches long, their bodies are adorned with beautiful colors and intricate patterns. The main body is silver, but there are numerous colorful accents, like a black patch on the dorsal fin and orange eyes.

It’s pretty fun to watch a pajama cardinalfish go about its way due to its wiggly swimming style. They’re peaceful and get along with most fish, including their own kind.

That said, males tend to get somewhat aggressive during breeding. They have an interesting social hierarchy that’s common in most schooling fish.

They’re territorial and nocturnal fish. However, you’ll also see them swim around during the daytime.

Pajama cardinalfish are micro predators that thrive on meaty proteins. They’re carnivores that require multiple meals throughout the day. Remember that they’re slow eaters – thus, they may not get a fair share of food if there are fast eaters present in the tank.

Royal gramma basslet, also known as fairy basslet, is one of our top favorite saltwater aquarium fish out there. These fish are easy to look after, peaceful, and look breathtakingly beautiful.

Thanks to their stunning colors, they’re super popular in the saltwater fishkeeping community.

The average size of a royal gramma basslet is 3-4 inches. However, it’s been reported that the fish seldom reaches maximum potential size in captivity.

The appearance is where these fish really stand out the most. These fish don’t have a whole lot going on in terms of patterns – it is all about the colors.

The front half has a rich shade of purple, and the back is colored bright yellow. The transition between these two colors is quite a start – making them look all the more unique.

The body is long and tapered towards the end. They look like colorful mini torpedoes.

The fish is known to display territorial aggression against their own kind. Thus, it should be housed singly. That being said, the fish is peaceful towards tankmates of similar temperament and size.

Royal gramma is an omnivore – its diet should contain a mixture of protein-rich and plant-based food. The diet in nature includes live plankton.

You can offer them frozen or dried plankton, mysis shrimp, brine shrimp, bloodworms, and crustacean flesh in captivity.

Chalk bass are underrated. Most aquarists often overlook these fish, but they have a lot to offer to the hobby. Their stunning appearance and subdued mannerisms make them an excellent addition to your saltwater community tank.

Growing only around 4 inches long, their body is shaped like a torpedo. The intricate orange and light blue pattern gives the fish a striking and unique look.

The color will look different in different lights. The adaptation to change color means they can camouflage better against predators. Sometimes the fish will look vibrant blue, yet sometimes they appear turquoise.

Chalk bass are peaceful fish for the most part and get along with most sea creatures. Matter of fact, they’re quite small and timid. Therefore, they tend to get intimidated around bigger fish.

You need to be careful when choosing their tankmates.

In the wild, they have a strict hierarchy within the school, where the leader chooses where to swim next. In the tank, they can be kept singly, but they thrive the best when kept in groups.

Chalk bass are omnivores – in the wild, they often snack on zooplankton, algae, and microfauna they come across throughout the day. In the tank, they’re not picky about what they put in their mouth.

You can give them squid, mysis shrimp, krill, brine shrimp, and chopped crustaceans.

Yellowtail damselfish are my personal favorites. They are beautiful to look at, inexpensive, and extremely hardy. These are the reasons they are found in aquarium shops everywhere.

In nature, yellowtail damselfish are found near the Pacific and Indian oceans – around Japan, the Philippines, and Australia.

These fish don’t grow very big. They only reach around 2.5-3 inches long as adults. They have a beautiful neon blue body and a bright yellow tail.

The transition from blue to yellow is stark – making them all the more appealing.

Yellowtail damselfish are often confused for blue damselfish. At first glance, they do look similar, but there are subtle differences.

For instance, yellowtails have yellow coloration only on their tail, whereas azures have the yellow shade extending from their caudal fin to the underbelly.

The saying “looks can be deceiving” couldn’t be more accurate in a yellowtail’s case. These fish are small, but their attitude is nowhere near as small as they are.

These fish are aggressive bullies. Moreover, they’re extremely territorial. They don’t mind bullying a fish to death if things don’t go their way.

Therefore, although hardy, small and beautiful, I wouldn’t recommend this fish to a beginner.

Speaking of diet, yellowtail damselfish are omnivores. In the tank, they will snack on all kinds of fish food but especially love meaty food like brine shrimp.

For a staple diet, you can give high-quality marine flakes or pellets.

Azure damselfish are easily one of the most beautiful and colorful beauties in the saltwater fishkeeping scene – making them an all-time favorite among hobbyists.

They’re also famously hardy. If this is your first time setting up a saltwater tank, you might want to consider bringing them home.

The fish doesn’t grow too big – reaching around 3 inches as adults. Like yellowtail damselfish, they have striking blue, and yellow coloration separated starkly towards the tail.

The tail is yellow, with the color extending to the underbelly from their caudal fin.

Once again, don’t go by appearance. These fish are incredibly aggressive. It’s not uncommon to meet a saltwater hobbyist who has been bitten by a damselfish.

Despite their miniature size, azure damselfish are super territorial. Once they have claimed a territory, they will fiercely defend it. They will chase and nip at intruders.

One of the redeeming qualities of azure damselfish is the ease of feeding. They tend to eat just about anything you place in the tank. By the way, they’re omnivores.

They will readily eat both live and frozen food, in addition to flakes and pellets. You can occasionally treat them with copepods, shrimp, and squid.

Firefish gobies are my yet another favorite. These terrific ornamental fish make a great addition to any nano or mini tank setup. Thanks to their unique shape and coloration, they stand out in any environment.

Appearance-wise, firefish goby are long and slender fish that only grow around 2-3 inches long. The coloration is just one of a kind.

Interestingly, firefish gobies have a swim bladder that allows them to hover in one location for a long period with its head pointed upwards.

Firefish gobies make excellent additions to any reef tank as they never bother other fish, invertebrates, and corals. When kept in a small tank, they will act territorial, but they’re not anywhere as mean as damselfish.

Matter of fact, due to their activity level, these fish often act as dither fish – prompting shy and timid fish to come out into the open.

Note that unless it is a part of a mated pair, firefish goby can quarrel with other fish of the same species.

As far as the diet is concerned, firefish gobies are omnivores. So besides algae and zooplankton growing in the tank, their diet should be reinforced with meaty food like brine shrimp, mysis shrimp, and frozen seafood.

A 20-gallon tank could serve as a springboard for your journey into the saltwater arena. It’s small enough to be manageable and big enough to not cause random fluctuations.