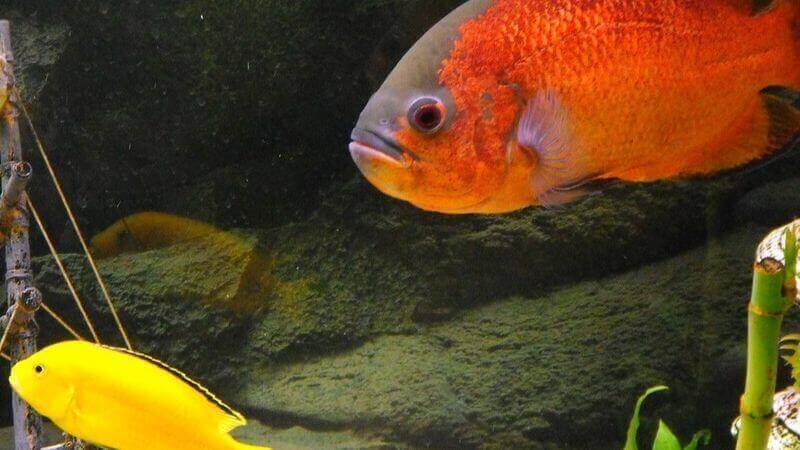 South American cichlids are the least aggressive in the family. They aren’t as competitive or hostile as the Central American and African cichlids. So, this docile nature makes them good members of most community tanks.

However, there’s a catch.

South American waters are home to over 450 cichlid species. From shady jungle streams of Peru and the freshwater of Amazon to open waters of Colombia and Venezuela, the ideal water parameters for these cichlids may vary quite considerably.

Generally, in the wild, South American cichlids live in very soft water that ranges around 0-4 dGh and 4.5-5.5 pH levels. While these values can go a tad bit higher in an aquarium, it’s important to pair them with peaceful fish that enjoy the same water parameters as they do.

So first, let’s have a quick glance at their water chemistry needs for reference:

Before we list out the suitable tank mates for South American cichlids, here’s a little disclaimer! Please take it with a grain of salt.

Finding the ‘ideal’ tank mates for your cichlid is always subjective. It depends upon the tank’s size, dietary pattern, breeding season, availability of hiding places, and temperament of your fish.

Nonetheless, pairing them with unassuming bottom dwellers and passive fish who can hold their ground when needed often leads to successful cohabitation.

Don’t go by the size. Silver dollar fish are some of the most peaceful freshwater fish available to us. If the tank’s conditions aren’t adequately met, they can get semi-aggressive – but for most parts, they’re quite mellow.

Silver dollar fish are peaceful enough to be kept with small to medium-sized South American cichlids while being big and sturdy enough to handle the company of bigger cichlids. You could very well pair them with acaras, juruparis, festivums, and oscars.

However, silver dollars are schooling fish. When kept alone, they tend to get a lot more reclusive and inactive. So, to house a couple of silver dollar fish with cichlids, you’ll need a bigger tank.

Clown loaches are peace-loving fish that usually swim around at the bottom or middle part of the tank. Thus, sudden confrontations and territorial aggression with cichlids are avoided for most parts.

And even during occasional confrontations, they’re usually able to easily hold their ground. That’s why they’re pretty popular in community tanks.

Since clown loaches have a complex hierarchy, they might tussle with each other once in a while, but this doesn’t extend to other fish.

They also have a skittish side to their personality. These clever fish tend to keep an eye on other fishes to measure threat levels in the tank.

They also hide around quite a lot. So don’t forget to add several hiding spots in the tank.

Corydoras can be excellent tank mates for smaller and medium-sized cichlids. They are best known for peaceful, calm, and non-aggressive temperament. They usually like to keep to themselves and scavenge methodically.

As bottom dwellers, they will never cross a cichlid’s path – so the chances of territorial aggression are quite low.

Cory fish are usually active during the day, but they’re also known to sit idly for several hours in the same spot.

And since corydoras are smaller in size, they tend to prefer being in a big school. So, you might want to add a couple of them at a time.

Also, don’t forget to include plenty of hiding spaces like rocks, caves, and plants.

Yet another bottom dweller in the list, leopard bush fish, is known to be calm and peaceful. They can even be described as timid – usually found hiding and foraging on the thick vegetation at the bottom.

Since they don’t come to the surface, there will be no territorial feud with cichlids. However, note that leopard bush fish do like to stake out their territory at the bottom. So, make sure you add caves and hiding places.

They’re diurnal for most parts but can also be active at night.

The unique coloration and patterns on the body also help these fish camouflage easily in the tank – drastically reducing predation possibilities.

Given their petite size, otocinclus can only be paired with smaller cichlids. These peace-living fish usually stay out of the way. And they’re pretty skittish. They can dart across the tank at a breakneck speed when threatened.

Since they’re very agile, these fish have a good survival instinct. However, don’t pair them with medium or big-sized cichlids.

If you’re adding otocinclus to the tank, you will need to add several hiding spots for them to take refuge in. Also, the minimum number to keep is 3. The number shouldn’t pose much problem since

Dwarf gouramis have a reputation for being peaceful and shy fish that do particularly well in a community tank. If you have a pair, you will often see them swimming together.

While large and aggressive fish might pose a threat, most South American cichlids should make ‘tolerable’ tank mates. However, when introduced to a new setting, your dwarf cichlids may hide a lot at first.

They usually keep to themselves by nibbling on plants, poking the substrate, and exploring. However, since gouramis are among active swimmers, we cannot rule out the possibility of territorial aggression.

Also, it’s best not to add multiple males since they often hold animosity against one another.

So, if you’re adding dwarf gouramis, make sure it has plenty of spaces for all inhabitants.

Besides vibrant colors, pearl gouramis are best known for their mellow temperament. In general, these fish are very peaceful and get along with a broad range of fish in a community setting.

The only time we can see their aggressive streak is during the mating season when the males will compete for the female’s attention.

Socially, they’re known to do particularly well when kept with fish of the same size and temperament. If you are housing pearl gouramis in the same tank as cichlids, you’ll have to make arrangements for plenty of space and hideouts – and they should turn out fine.

So, that was our roundup of the most compatible fishes for your South American cichlids. However, note that there’s no guarantee that your fish will get along with the new member.

Factors like the tank’s size, layout, size of the fish, inherent temperament, and water chemistry needs play a huge role in determining the best tankmates for your South American cichlids.