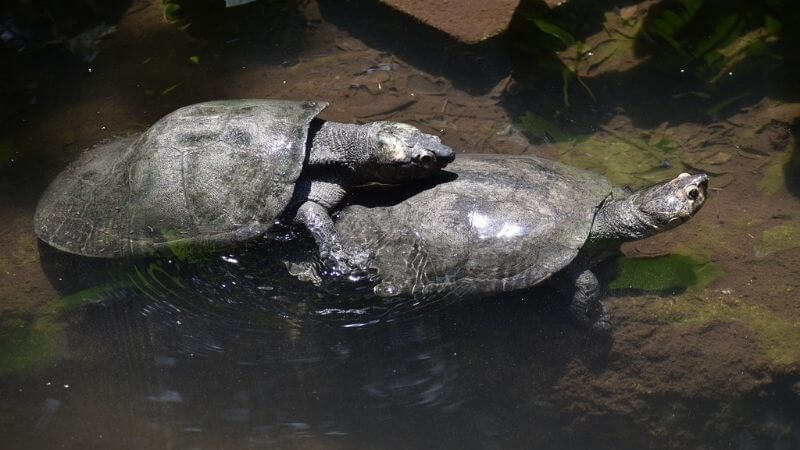 Half of the world’s population is blessed with a penis. But, some animals have more well-endowed reproductive organs that you will be shocked (jealous) to know about.

Blue whales are one such animal. Their penis length can reach between 8 to 10 ft with a girth of over 1 ft. But even such a massive penis-possessing animal will fall shy in front of turtles, who command a bigger junk-to-body ratio.

How Big Is A Turtle’s Penis?

Turtles’ penises are about half the length of their bodies. This means a red-eared slider of ten inches in length is gifted with a penis that grows over 4 inches. This is a real shocker.

A turtle’s penis, when not in action, lies tucked inside its shell. And when this flaccid penis is fully erect, it can grow its length by over 50%, width by 75%, and girth by 10%.

Shape Of A Turtle’s Penis

A turtle’s penis is like a mammal’s penis. It is a hydraulic cylinder that enlarges when there’s an influx of blood rushing towards it.

Color Of A Turtle’s Penis

It is dark purple.

Anatomy Of A Turtle’s Penis

They have a single erectile body divided into a collagenous corpus fibrosum and a marginally vascular corpus spongiosum. The corpus spongiosum is highly expandable and is the reason the turtle’s penis gets enlarged so dramatically.

How Does A Turtle’s Penis Rest Inside Its Shell?

A pair of long retractor muscles run the length of the turtle’s penis and link with the lumbar vertebrae within the body cavity.

An inactive penis doubles upon itself and rests within the cloaca. And when it is stimulated by sexual prospects and other factors, the folded penis unfolds and bulges out from its cloaca.

When active, the enlarging penis will bend to the front part of the turtle’s body, all thanks to the robust retractor muscles in their penis.

What Is The Similarity Between A Turtle’s And A Human’s Penis?

The collagen fibers present in the turtle’s penis are perpendicular to the penis’ long pivot. And when these fibers stiffen because of various stimuli, the impression of an erect penis is observed. These collagen fibers work in the same way the penises in mammals do.

Dr. Diane Kelly, in her research paper, has shed light that turtle and mammal penis designs are anatomically convergent.

You can read here:

Appearance Of A Turtle’s Penis

There’s a long, seminal seam running from the base of the penis to the glans, tip of the penis. This openly-displayed seam differs from mammals’, who have it confined inside their penis. However, these exposed seams are standard in birds and reptiles.

These seams or grooves are more prominent near the tip of the turtle’s penis. At a glance, these glans look alien-like.

When at work, the glans head can open and close like the insects-eating plants (ceropegia). When the male turtle is in action, the glans’ head throbs and pulses in motion.

You can check it out here in this clip, where a Red-footed tortoise is trying to copulate with a rubber ball. The purplish head you notice is the glans.

The glans in sea turtles are linear and perpendicular to the pivot on the base of the penis. There is a single, deep-folded seminal groove on it.

Whereas in semi-aquatic and terrestrial turtles, the skin in the glans is thick, and they open up in flower-like heads.

As I mentioned earlier, sea turtles’ penises have a much simpler anatomy compared to other turtles.

Sea turtles are among the largest turtle species, so yes, it is a no-brainer that they have larger penises than other turtles.

An adult green sea turtle has a carapace length between 31 to 43 inches. And their penises are usually over 12 inches in length.

Let me give you an idea of how big leatherback turtles’ penises are.

Adult leatherback turtles have a carapace of over 86 inches long. And their penis length, on average, is over 34 inches. That’s nearly thrice the length of a green sea turtle’s penis.

So, Why Do Turtles Have Big Penis?

Evolution always finds an innovative way to help a species continue its lineage. It is the same in a turtle’s case. The tail in male turtles is much longer and thicker than in females.

Generally, the vaginal opening is said to be at the base of a female turtle’s tail. But in actuality, it is located somewhere along the tail’s length.

Hence, this requires the male turtle’s penis to be longer than the female’s tail and reach the tricky area to inseminate the female turtle.

However, it would be bold to claim that it is the only reason behind turtles possessing those enormous penises. Because the fossil findings of the Cretaceous sea turtles showed they had really long tails, which is exceedingly lengthier than modern-day sea turtles’.

There are also some other instances when turtles flaunt their huge penises.

Turtles do not unleash their enormous penises during mating only. Male turtles are found bulging out their penises while resting, too.

Often, when they submerge their front half while drinking, they raise their back legs and take out penises through the cloaca. It looks like they are trying to cool down their weenies.

And after dipping it in the water once or twice, they will retract the penis back into their cloaca.

Did you know that turtles also put their penis on display when they get aggressive?

Yes, species like snapping turtles are found to display their enormous penises to counter handling. They usually do this when we touch their carapace.

Although a turtle’s penis display might not be intimidating for humans, it is for their competitors or enemies.

The sheer display of an 8 inches long, purple penis is scary enough to fend off the incoming aggressors.

How Do Turtles Mate?

During the mating season, the female turtles give off pheromones through their cloaca, which are picked by male turtles right away. The male turtles will then follow females everywhere. He will be so relentless in his pursuit that he will chase after her inside the water, too.

The male will then smell the female’s cloacal opening, the vagina’s location.

After several hours of pursuit and smelling her genitals, the male turtle will get in front of the female and flutter his front limbs to display his long claws. Long claws are signs of male chauvinism in turtles.

Displaying his long claws, he will then gently stroke her head. Unlike male tortoises, male turtles do not exhibit aggressiveness towards females during courtship.

Instead, the male turtle asks for the female’s consent. She then drops cues by turning around and indicating to put his penis inside her cloaca.

The male will thrust his humongous penis into the female’s vagina. They then twist and twirl their tails in a union, and the male passes his semen into her vagina.

Witnesses have claimed that it is a sight to behold.

How Do Sea Turtles Mate?

A sea turtle’s mating ritual is quite different from a semi-aquatic turtle’s. Sea turtles, like most other turtles, are loners, too. They foregather only during the mating season.

The mating season for sea turtles starts when the temperature rises and the days get longer.

Turtles know that this is the perfect time to procreate because the temperature plays a vital role in determining the sexes of their offspring.

Research has revealed that if the incubation temperature in the nest is above 84.2 degrees Fahrenheit, the offspring will be males and below it will yield females.

As I said, turtles come together only during mating season. So how come they know where to meet?

Well, turtles, both male and female, return to the place where they hatched. The females know that this is the perfect venue for nesting, and males know females will be there.

Did you know that male sea turtles can detect airborne and waterborne odors – this explains their ability to smell female pheromones in the sea?

The male turtles will reach the beach much earlier than the females. This is because turtles mate on a first-come, first-serve basis.

Unlike in many other species, female turtles aren’t picky when choosing their mating partner. They will mate with the first one to approach and court.

A male turtle has long claws at the top of his flippers, which he will hook onto the female’s carapace. His sharp claws can injure her shell, leaving scratches and marks.

Then he will bring out his monstrous penis, which can be half the size of his shell.

He will then inseminate the female’s vagina, near the base of her tail.

The male turtle will not leave immediately after inseminating. Instead, he will remain attached to her for several hours to prevent other males from inseminating her. However, he will have to give up eventually due to competitors’ constant biting and harassment.

After the separation, both the male and female will mate with a few other partners. And once the female has enough sperm to seed her eggs, she will commence nesting.

In a single season, a female can lay over 100 eggs. However, laying that many eggs will drain her energy, and she will not return for mating next season. But the males will follow this routine every season.

Turtles are endowed with enormous penises. But they keep it tucked inside their shell, so we might be unaware of their secrets despite raising them for years.

It is only speculation, but I am sure their monstrous penises definitely helped them repopulate after facing several mass extinctions.