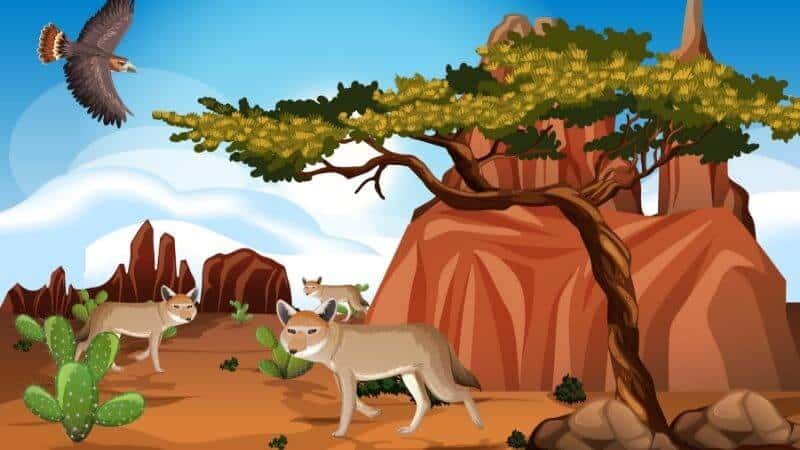 Turtles are one of the oldest beings on our planet. They have been dwelling on this planet for over 230 million years.

Many factors have played a role in their survival. Primarily their hardy shell is counted in that list.

However, despite having a hardy shell to protect them, several predators can still hunt and eat them.

So in this article, we will discuss which animals eat turtles and how you can keep them safe in your home (if you happen to live in the suburbs).

So, What Animals Eat Turtles?

The list of animals that can eat turtles are skunks, raccoons, foxes, coyotes, along with reptiles like snakes, alligators, and crocodiles. Predatory birds such as eagles, hawks, vultures, crows, kites, owls also consume turtles. Some turtles like snapping turtles are also found to be eating other turtles.

Here are the animals that can eat turtles.

Skunks fall under the new world mammal category. They have long frontal claws and jaws, which they use for killing their prey. And turtles, too, do fall on its menu.

However, nowadays, skunks are also reared as pets by many. So if you are keeping skunks and turtles both, you might want to keep them separate.

Wild skunks are great at scavenging and will come strolling near human garbage cans and their backyard searching for food. They will raid your turtle’s nest and eat their eggs and sometimes even turtle.

Known for their cunning abilities, raccoons are a threat to turtles. Unfortunately, they have adapted very well to the urban areas, making it dangerous for turtles kept in the backyards and ponds.

Furthermore, they have the remarkable ability to spend hours in water and can swim three miles per hour. So if you have an uncovered pond, these raccoons can hunt down turtles inside the water.

Foxes are notorious and are one of the most intelligent animals. They will rely on their sense of cunningness to find turtle nests and eat all the eggs.

Generally, they prefer hunting during dusk. This is because they are most vigilant at this hour and will actively search for their dinner.

And once it finds a turtle’s nest, it will prey on both turtle and the eggs.

Coyotes are another culprit behind the missing of your turtles or their eggs. They are similar in level of intelligence with the foxes and have great smelling power, which helps them hunt prey.

Snakes also feed on turtles, especially freshwater turtles that are smaller in size. They will raid the nests of the turtles and will completely devastate their nest.

Snakes like Rat Snakes pose a threat to turtles and their nests.

Another snake known as Formosa Kukri, which is found in Asian countries, is famous for devouring sea turtle eggs.

Although adult turtles are too big for them to swallow, they can still devour newborn turtles.

Several reptiles can eat turtles in the wild. One of them is frogs. Bigger frogs are known to prey upon tiny freshwater turtles and their eggs.

And lizards like Monitor lizards and Tegu are found to be raiding turtles’ nests.

Reptiles like alligators and crocodiles can also overpower matured pond turtles and box turtles. They will wait for their chance, and when the time’s right, they pounce right off. The turtle’s hard shell doesn’t last much against the sheer biting force of these more giant reptiles.

Birds on a higher food chain also eye upon turtles for food. Crows and kites look for turtle nests to eat their eggs. They will also eat up the newborn turtles.

Predatory birds like hawks, eagles, and vultures will pick up the turtles with claws and carry them off to heights. Then they will drop them unto the ground to crack their shell.

This will crack their shell open, leaving their flesh to be torn. Then, finally, they will gnaw through their bones and feast upon them.

Did you know that turtles can sometimes turn cannibals? Yes, when these turtles do not have enough to feed on, they will turn against smaller turtles and eggs to satisfy their appetite.

Both wild and captive turtles have been found to eat their own.

Findings have shown that the snapping turtles’ diet includes other turtles too. So a turtle-eating turtle isn’t a shocking thing now.

If you have a turtle living with dogs and cats, your turtle could be in danger from these pets. Dogs have playful nature and can get rough when playing around your pet turtle. So there’s always the danger of them biting your turtle’s shell.

Although your dogs won’t eat turtles, their bites force is strong enough to injure your turtles. So it isn’t recommended to keep them in close proximity.

Cats, on the other hand, are curious and will start bickering your turtle. In addition, they have sharp claws and tend to hit your turtles’ eyes with their paws. This might even cause blindness in your turtle. So be extra careful with cats.

So, How Can You Protect Your Turtles From Being Eaten By Other Animals?

Here are some tips on how to protect your turtles from their predators.

Have Plenty Of Vegetation.

Fill your garden or backyard with plenty of vegetation. This will provide more cover for your turtles, especially from the predatory birds.

Install A Birdcage On Their Nests

Get a birdcage to protect your turtles’ eggs from predators. You can place it over the turtle’s nest. Add some weight like a heavy stone over it so that animals or birds cannot carry it away.

Leave a small gap that is large enough for your turtles to enter and exit.

Have Adequate Plants In Your Ponds.

If you have a freshwater turtle, it is necessary to have plants in your turtle’s pond. Vegetation will provide hiding space for young turtles and keeps them safe from predators.

If you have a cat or dog, then it is recommended to keep them indoors. However, if you are taking them outside, you need to be extra careful with them around the turtles.

Their little bite or scratch can harm your turtle, especially aquatic ones, as they do not have tough shells like tortoises.

Make A Brush Pile For The Hatchlings.

Brush piles and leaf shelters replicate the natural habitat of the turtles. But not all turtles find it safe to come outside in the open. So make a brush pile full of leaves for them.

These will cover your turtle from other predators and keep them safe.

These piles also attract other insects and worms, making them an ideal place for your turtles to come for food.

By now, you might have known that the shells aren’t enough for your turtles to be safe from their predators.

Though many natural predators like alligators, coyotes, and foxes do not come near the suburbs, there are still other animals who can prey upon your turtle in the backyard.

You can save your turtle from other predators by having more vegetation in their pond and its vicinity. This way, they can jump into water or get cover from the leaves when predators are nearby.

Another thing is that you have to keep your other pets, such as dogs and cats, away from the turtle. Their canines and claws can kill your turtle in an instant.