What Can Turtles Eat From Human Food? Avoid These Food 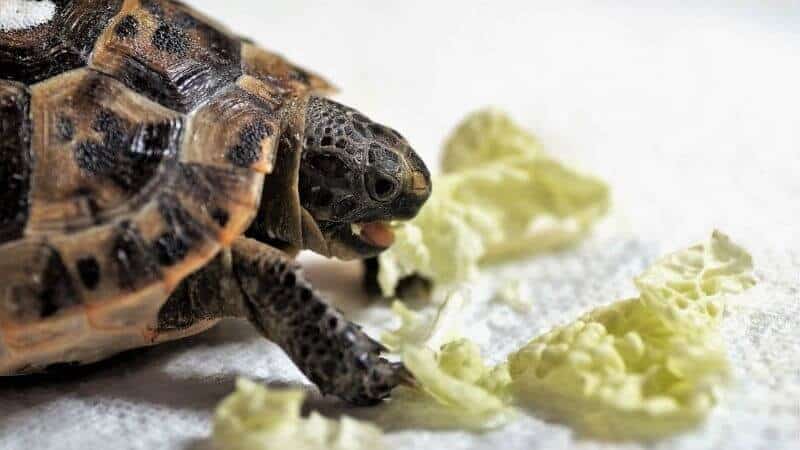 If you just got a pet turtle, you need to prepare a turtle-specific dietary plan. It’s not always best that you get commercial food for your pet turtle. For a balanced diet, turtles need to eat nutrient-rich food, which is healthy for them.

What can turtles eat from human food? A turtle can eat everything humans consume as an omnivore, but some human foods should be completely avoided or given in moderation to prevent your turtle from getting ill.

Yes, turtles should eat meat, and every turtle owner knows that turtles love eating meat. However, they should be given in the right amount, or your turtle’s digestive system won’t be in order.

Meats are high in protein, and turtles need protein to develop a healthy shell. In addition, protein is the only macronutrient that a turtle cannot store in its body, so daily intake of protein is required.

How To Feed Meat To A Turtle?

You can feed both raw and cooked meat to your turtle. However, raw meat contains bacteria if it’s not been refrigerated, and this can cause your turtle to get an upset stomach. So try not to feed him too much raw meat.

Boiling the meat will kill all the bacteria and soften the meat’s texture, which your turtle will find easy to chew. Too much oil use while cooking will harm your turtle’s health. That’s why I recommend boiling rather than deep frying the meat.

After boiling, cut the meat into smaller pieces and, if possible, shred the meat. This helps in the easy breakdown of the food and eases the digestion process.

What Happens When A Turtle Eat Too Much Meat?

When a turtle overeats meat, your turtle is likely to develop the pyramiding disease. This disease speeds up a turtle shell’s abnormal growth and turns the shell into a pyramid-like shape.

Too much protein causes pyramiding in a turtle—the excess amount of protein deposits on the scutes of a turtle’s shell to form these bumps. However, there isn’t much evidence that pyramiding in turtles leads to any health hazards. Still, it is found that turtles with pyramiding have a hard time mounting female turtles during the mating season.

Research has found that pyramiding is a rare case in wild turtles. The natural diet in the wild, which comprises high fiber elements and the right amount of protein, is why the wild turtles aren’t pyramiding.

However, the captive turtles are fed by humans, and no matter how hard we try, we won’t be able to replicate the natural diet they get in the wild.

In the wild, turtles eat any food, and fish is one of their favorite. Sea turtles are much fonder of fish than meat, so they will eat any fish you serve them.

Fishes, however, have a lesser amount of fat but richer in protein than meat. And as I explained earlier, too much protein will cause pyramiding in your turtle shell.

How to Feed Your Turtle a Fish?

Like meat, you shouldn’t give too much raw fish to your turtle. Boil it and take out the bones if it’s a larger breed of fish. Turtles like to swallow food whole, so sharp bones from bigger fishes could injure their internal organs. That is why it’s better to have the bones removed before giving fish to your turtle. Also, boiling makes the fish tender and easy to eat.

What Type Of Fish Do I Need To Feed My Turtle?

You can feed your turtle any fish. But I recommend that you give him feeder fishes. Feeder fish are inexpensive and have a high fecundity rate. This means that you can breed them in a separate tank and feed them to your turtle. Fishes like Oscars, Gar, and Rays are some examples of feeder fish.

You can include other fish breeds in your turtle’s dining list like bluegills, bass, crappies, guppies, killifish, and platies.

What Type Of Fish Should Your Turtle Avoid?

Fishes like goldfish and wild feeder fish are some breeds of fishes that you should avoid giving to your turtle. Other fishes like rosy red minnows, carp, gizzard shad, and feathered minnows need to be avoided too.

Why Feeding Goldfish To Your Turtle Is A Bad Idea?

Goldfishes are rich in fat content, and a turtle’s diet shouldn’t comprise too much fat. If a turtle consumes too much fat, they are likely to have vitamin E deficiency, which causes weaker shell development, weak bones, and low immunity in turtles. So, it will be better if goldfish is not on your turtle’s menu.

Another such fish to avoid is wild feeder fish.

Why Shouldn’t You Feed Wild Feeder Fish To Your Turtle?

But you might think that what about a wild turtle who you think eats wild feeder fish daily for breakfast. Let me clear your doubts. Turtles in the wild aren’t known to catch that many wild fishes and eat. Most of their diet mainly consists of fiber. It is also hard for them to catch fishes in the wild, let alone a wilder fish.

Therefore, turtles get too excited when you feed them fish because it is one of their most demanding game to eat in the wild.

Yes, turtles eat vegetables as they are highly nutritious and can be served daily. Vegetables like spinach, chard, beetroot, rhubarb, potatoes, Broccoli, and endive are some calcium-rich foods you can include in your turtles’ diet.

Calcium for turtles is essential for their body to function correctly. However, vegetables contain oxalates known to bind minerals such as calcium and take them out of the body while excreting.

A turtle’s entire body is made of calcium, so calcium loss due to the consumption of oxalate food is terrible for their health. So, too many veggies that contain an exorbitant amount of oxalates should be minimized in your turtle’s diet.

Vegetables like Bok choy and Broccoli are rich in calcium and low in oxalate.

Along with vegetables, fruits too can be fed to turtles. They will easily relish this treat whenever you feed them. But in a turtle’s diet, fruits shouldn’t comprise over 10%. Fruits have higher nutrients than vegetables, but they won’t leave your turtle tummy full like vegetables do.

Yes, turtles love insects. Turtles eat insects all the time in the wild, so giving insects to your turtle is a good idea.

If you want to give your turtles some insects, then try dried crickets. My turtles love it.

A turtle can eat bakery items, but they do not have any nutritional benefits. If you have been feeding your turtle bakery items, make sure you don’t feed him any stale bread.

Bread and bakery items build fungus quite fast. This fungus-infested food will do no good to your turtle.

Giving sweets to your turtle isn’t a good idea. They contain a high amount of sugar, which is harmful to your turtle. This only increases his metabolism rate and will age your turtle faster

Snacks contain preservatives and artificial flavors, which aren’t suitable for your turtle. These snacks might taste great for us, but for a turtle, they mean only bad health. Furthermore, sugar and salt will disrupt their digestive system.

Once I tried giving milk to my turtle, and he just walked away. First, I was angry that he didn’t like the treat I gave him, but later I was glad that he neglected the milk.

Later I came to know that dairy products are hard for turtles to digest, and they shouldn’t be given.

Turtles eat eggs, and these eggs are a dominant source of protein for them. In fact, they eat all types of eggs.

While giving eggs to your turtle, you need to boil them first. Peel them and slice them into tiny parts so they won’t make their dining place messy when they eat.

Final Words On What Can Turtle Eat From Human Food

Yes, turtles can eat almost any sort of human food, but you should be knowledgeable enough to know which food does good or bad to him.

A turtle’s diet in the wild mostly comprises fiber, so encourage him by giving lots of fiber-rich fruits. Another essential element in his diet should be protein, so feed meat or fish in a considerable amount daily. Ensure he doesn’t consume too much protein as this only leads to the pyramiding of his scute.

You can include veggies and fruits so that your turtle gets a balanced diet in his daily intake.

Do Turtles Change Color – Reasons Behind Why They Lose Color

Do Turtles Like Music? The Science and Myths Behind It