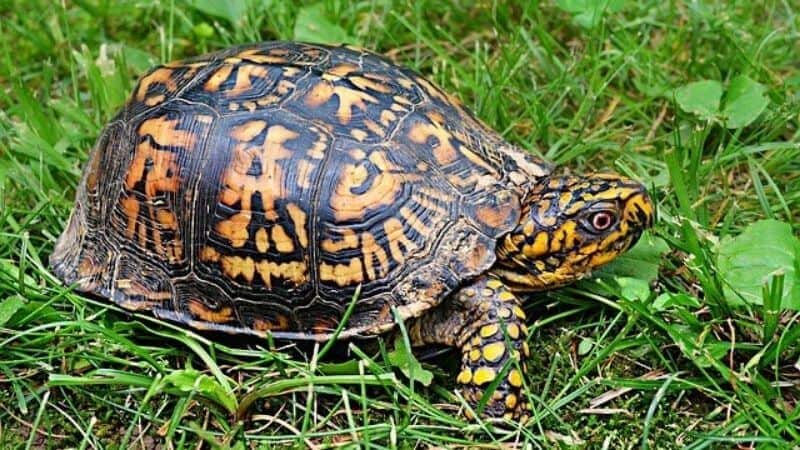 Do you know box turtles are still primarily wild animals? A good chunk of their population is still undomesticated.

They are usually obtained as juveniles and adults from the wild and can have a tough time adapting to captivity. Even those raised in captivity their whole life hold onto pretty strong instincts from the wilderness.

So, when it comes to winter, what do they do? Do they hibernate or not? Let’s find out.

What Do Box Turtles Do In The Winter?

With cooling temperatures, box turtles start to slow down. They become significantly less active as they can’t create as much energy as they’d create in warm summer months. However, not all species of box turtles brumate. Northern species are most likely to go on a long slumber, while box turtles from the warmer South may not at all.

Regardless of the species, some turtles may skip brumation in captivity – especially if the conditions are warm enough for their liking and the day length remains artificially long. On the other hand, some will stop eating in the early fall despite the tank’s artificial condition.

And if you’re wondering why I’m using the term ‘brumation’ instead of ‘hibernation,’ it turns out it’s not just another fancy word for the latter. Read below.

Brumation and hibernation are almost identical processes with one major difference. Hibernation refers to the long sleep warm-blooded animals engage in during winters, such as bats and bears. On the flipside, brumation describes the deep sleep cold-blooded animals as turtles undergo during the cold season.

I know these words are used almost interchangeably. And honestly, I don’t see the fuss as long as one knows how to take care of their pet when they embark on a long, sleepy adventure during the winter break.

That being said, there’s so much that one needs to understand about brumation.

The answer to what do box turtles do in the winter can be long and complicated. What happens when box turtles are in brumation, how to prepare, and how long they sleep – many questions need answers – and there’s absolutely no room for mistakes.

So, let’s see how you can help your box turtle survive winter.

How Long Do Box Turtles Brumate?

For box turtles that brumate, the duration lasts around 5 months. They go into the brumation period around mid-October. And once the weather warms up and the spring rain loosens the soil, the exposure to sunlight will trigger them to emerge out of their hibernation. This usually happens during March/April.

Even so, it’s important to note that not all box turtles hibernate for 5 months or so. Usually, captive pets hibernate for a shorter period because they don’t actually live under nature’s harsh conditions.

How To Help A Box Turtle Hibernate?

There’s no one simple answer for how to help box turtles hibernate. First, only healthy adult turtles should go into brumation. And you must take your pet to the vet and check if it’s a suitable candidate to brumate. From feeding a vitamin and fiber-rich diet to making sure the digestive tract is empty, there are several things to keep in mind.

Here are a few pointers that cover all the essential steps you need to know:

So, make sure that you research your turtle’s species since hibernation patterns and durations also differ more or less among different species.

Whether you’re a seasoned turtle owner or a newbie, it’s crucial to take your box turtle to the vet and get it assessed. If a sick turtle goes into brumation, there’s a good chance that it won’t ever wake up. And an extra pair of watchful eyes are always good – thus, you can also check for signs of illness.

Some noticeable signs are:

It’s vital to track your pet’s weight before and throughout the brumation process. This helps to ascertain if your pet is healthily shredding weight or fatally starving. Weigh your pet once every 2-3 weeks. And make sure to use the same weighing machine every time to remove irregularities.

Feed Vitamin A and Fiber-Rich Diet

About 12-16 weeks before brumation starts, feed your turtle vitamin A-rich foods like carrots, leafy greens, and fish. When they brumate, vitamin A depletes quite quickly. Similarly, about 6-8 weeks before hibernation, focus on feeding fiber-rich grasses and hay.

If you’re not too sure about your turtle receiving enough vitamin A from its food, you can also rely on supplements like this from Nature Zone:

You can apply 2-4 drops directly on the turtle’s food or mouth. The extra benefit of feeding this supplement is that you turtle’s chance of getting an eye infection is dramatically reduced.

You need to fast your pet box turtle 2-6 weeks before brumation. Not fasting turtle before sending it to brumate can lead to fatality. First, the food can decay in the digestive tract and cause bacterial infections. And second, the decayed food can create large gas clouds that’ll internally press your pet’s lungs.

Some argue that a small pet like a box turtle should only fast for 10-14 days, but I’d recommend beginning fasting around 3 weeks early. Better safe than sorry, right?

Once the fasting period begins, soak your pet box turtle in chin-deep water for around 30 minutes every alternate day. It’s vital to ensure easy and constant access to drinking water at this point and throughout hibernation. This will encourage your pet to expel waste timely and stay hydrated.

As you already know, temperature plays a key role in your turtle’s metabolism. That’s one of the main reasons turtle brumate during winter. Once you ensure the box turtle’s stomach is empty, commence the next process of gradually lowering the temperature. Just be mindful that you don’t go lower than 50°F (10°C).

Box turtles are capable of both indoor and outdoor brumation. For indoors, the common practice is to use a refrigerator. If your turtle is going to brumate outside, make sure that it’s safe from predators like rats and foxes.

If you are going to use a fridge, make sure that you open its door at least 3-4 times a week since fridges are completely air-sealed. Also, don’t forget to measure the temperature time and again to correct fluctuations.

For outdoor brumation, choose an area that’s sheltered from the wind and rain with several feet of loosened soil. Next, spread a foot or two of hay or leaves to cover the soil. And it’s super important to be sure that area drains quickly and isn’t prone to flooding.

And once your turtle emerges from hibernation, don’t forget to soak it in lukewarm water every day for a week or so until it starts eating properly.

If it still doesn’t eat or poop after a week, you need to consult the vet.

Here’s an interesting video of a turtle parent showing how he hibernates his Ornate Box Turtle:

Conclusion On What Do Box Turtles Do In The Winter

So, to wrap it up here’s a short recap of the most important bits.

It’s important to know that not all box turtles brumate during winter. Northern species, like Ornate and Eastern Box Turtles, may brumate, while those that live closer to the equator, like Gulf Coast Box Turtle, most often skin this phenomenon.

Box turtles are capable of hibernating both indoors and outdoors. Either way, you have to take care of things like taking your pet to the vet, changing diet, emptying the respiratory tract, and lowering the temperature.

I hope that you haven’t skipped on any information because a seemingly small mistake from your side can lead to deadly results. Brumation in box turtles is a natural, biological process. Still, when conducted artificially, it can go either way if you’re not careful enough.