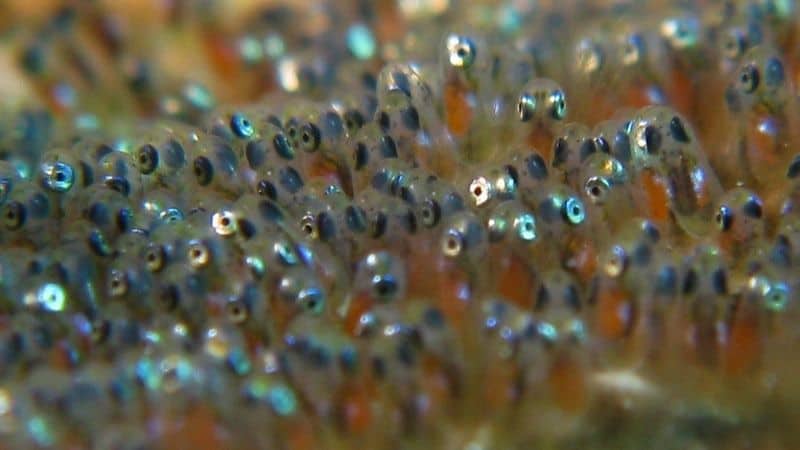 I still remember the first time Finding Nemo was released back in 2003. I endlessly requested my parents to get me my very own Nemo but to no avail.

A decade and a half later, I got a pair of clownfish for my first-ever saltwater tank. I was just dabbling in the saltwater avenue for the first time – testing waters.

So, I was dumbfounded when I woke up to what seemed like thousands of little wiggly balls on the underside of the rock next to the anemone.

It looked as if these spherical balls were attached to the rock, and they kind of swayed around with the water current. Both my clownfish were spending a good portion of their time fanning these tiny ‘marvels.’

Only later did I find out that these were actually clownfish eggs! And they were already halfway into hatching.

So, if you’re like me and have never had any experience with clownfish eggs, you have come to the right place.

Therefore, in this guide, I won’t just tell you what clownfish eggs look like but also go into the details of their development.

Clownfish eggs look like tiny poppy seeds around 2-4mm in diameter. The eggs’ colors can range from translucent white to bright orange when first laid. The color depends on the parents’ base color.

Since clownfish can lay up to 1000 eggs in a single spawning season, it will initially look like someone spilled poppy seeds all over a surface.

The eggs are sticky and will adhere to the surface. If there’s a suitable slate or cave nearby, your clownfish will most likely choose to lay eggs on top of it.

As the eggs grow over the next 3 to 4 days, they take on an unusual cylindrical shape. You can clearly see their eyes and a tint of orange inside their bodies.

Here’s another photo from a closer angle.

The eggs continue to develop rapidly and hatch in the next 6 to 7 days.

During my research, I found out that not all clownfish eggs look the same.

There are over 30 different species of these fish. And the appearance of their eggs more or less differs depending on what clownfish species they belong to.

Below, I have collected a few answers from hobbyists on the subject so that you can have well-rounded information.

Let’s have a look.

What Do Clownfish Eggs Look Like? Real Answers By Real People

Note: All the statements mentioned strictly belong to the respective authors.

“The eggs looked like little, round and dark things on the underside of a rock next to the anemone.”

“The eggs look exactly like sushi roe. They turn darker as they develop, and you can see a silver tip for the eyes.”

“The eggs will only look orange if your clownfish is an ocellaris or a percula. The color of freshly laid clownfish eggs should be the base body of the parent – the mother actually.”

“Most of the newly laid clownfish eggs that I have seen (mostly that of ocellaris) have looked just like the ones in Finding Nemo. however, they do darken with age, and you can see silver bits for the eyes.”

“First few days, the eggs are orange. They then become clearish silvery. If you observe closely, you can see two eyes – black dots with a silver lining – from about day 4.”

The Development Of Clownfish From Being An Egg To A Juvenile

The four developmental stages of a clownfish’s life are egg, larvae, juvenile, and adult.

The eggs are transparent and elliptical when laid. They’re about 3-4 mm in size. Depending on the clownfish species, the color may differ from translucent white to bright orange.

The eggs hatch in about a week’s time. And the pelagic larval stage lasts for 7 to 14 days after hatching.

When first hatched, the wrigglers have an advanced alimentary canal, and they feed on the nutritious yolk sac that comes attached to their bodies. They rely on the yolk sac for about 3 days.

Reportedly, 3 to 5 days after hatching is the period they are most susceptible to starvation and death. Therefore, you should pay special attention to their feeding regime.

The first food you can offer is rotifer.

7 days after hatching, the larvae attain gastric glands. And by the 9th day, they have supranuclear vacuoles, which indicate exogenous digestive capabilities.

In the larval stage, clownfish live on the water surface and are transported by currents.

Finally, metamorphosis happens when the young clownfish leave the water surface and swim down to the bottom. It’s at this stage they take on the pattern of a juvenile.

This marks the onset of the settlement period. The clownfish will now actively search for an uninhabited anemone host using visual and olfactory cues.

All clownfish species are protandrous hermaphrodites – meaning they can transform from male to female. That’s because these fish are born with both male and female reproductive organs.

If you are interested to know more about this fantastic phenomenon in depth, here’s an article I know you will love:

How Do You Know If Clownfish Are Breeding?

If the weather is favorable, clownfish will spawn throughout the year.

Some visual and behavioral cues can quickly give away if clownfish are breeding. For instance, the female’s belly will look distended. The pair will also meticulously clean the spawning spot and involve in an elaborate courtship ritual.

The Female’s Belly Will Look Distended

When the female is gravid, her belly will look swollen and distended. After all, she is housing around a thousand eggs inside her belly.

The change in her appearance may not be apparent right off the bat. So, make sure you check her out from the top angle.

If the belly looks swollen and protruding, she will undoubtedly lay eggs in the next few days.

In males, the tube is long and pointed. In females, it is somewhat blunt and broad.

The Male Will Clean The Spawning Spot

The male is tasked with finding a spawning spot and cleaning it spotless. The chosen spot is usually a cave or a flat rock close to their host anemone.

He will meticulously clean it and make sure the surface is smooth. He will remove substrate, detritus, algae, or anything that’s on the surface. Female usually helps the male with cleaning duties too.

And the pair will stick near the breeding spot for the most part. They don’t stray away from it.

The Pair Will Carry Out An Elaborate Mating Ritual

Clownfish are very expressive. Therefore, if you keep a close eye, you can see the couple communicate courtship through touch and movement.

The pair will also engage in head-standing and delicately touching each other’s ventral and dorsal surfaces.

And finally, the female will lay eggs on the designated spot in a zig-zag pattern, and the male will swiftly follow the cue and fertilize them.

Yes, most clownfish eggs are orange. Reportedly, the eggs derive their colors from the parents’ base colors. Interestingly, they look precisely like sushi roe.

Here’s a photo. Can you draw any comparison?

How Long Do Clownfish Eggs Take To Hatch?

Clownfish eggs take around 6 to 7 days to hatch. During incubation, they transition from a spherical to cylindrical look. From the 4th day onwards, you can even clearly see the eyes.

Can You See Clownfish Eggs?

Yes, you can very well see clownfish eggs. They’re about 2-4mm in diameter. Plus, they are laid in big clutches. So, they’re easily visible.

Where Does A Clownfish Lay Eggs?

A clownfish usually lays its eggs on a flat rock surface. Since the eggs are sticky, they adhere to the rock quite easily. They sometimes also lay eggs in caves.

The chosen spot is usually right next to their host anemone.

What Time Of Day Do Clownfish Lay Eggs?

9 out of 10 times, clownfish spawn at night. Hobbyists often wake up to a big clutch of tiny, wiggly balls the next morning.

Can Clownfish Eggs Survive In An Aquarium?

Clownfish eggs have a meager survival rate in a community aquarium. They often get eaten, washed away, and develop fungus, too.

Therefore, if you are looking to hatch and raise clownfish, you would want to transfer them to a separate, much smaller tank that doesn’t house any other creature.

Clownfish eggs are little spherical balls around 3-4mm in diameter. The egg’s color can range from a washed-out shade of white to bright orange, depending on the parents’ body color.

As the eggs develop, they take on a cylindrical shape. 4 days after fertilization, you can even see a distinct pair of eyes developing inside the egg.