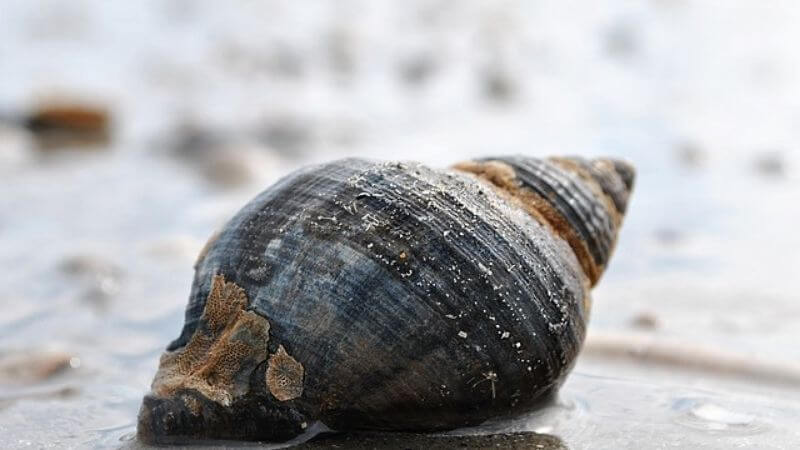 There are more than 43,000 species of snails found all over the world. So, it might be hard to tell the diet preferences of every type.

However, to satiate the curiosity of our valuable readers, I have brought you the list of foods that sea snails eat. There are some commercial foods on this list, along with organic ones.

Sea snails can be carnivores, herbivores, or omnivores. The herbivore snails eat algae, seaweed, cordgrass, and biofilms. In contrast, the carnivores feed on small fish, carrion, worms, clams, and other sea slugs.

Here I have explained them in detail.

Most sea snails prefer algae as their primary food. This is why snails are often hailed as the natural solution for algae control in aquariums.

Here are some species of snails that feed on algae:

This snail from the indo-pacific region has an excellent appetite for green algae. Alongside green algae, they feed on slime algae, diatoms, filamentous algae, and cyanobacteria.

Unlike other snails, they can turn themselves upright if they fall on their back. This is why they are tougher than other snails – thus, blessed with longer lives, which means you won’t have to spend a fortune replacing them.

These snails feast specifically on hair algae. However, they can eat other kinds of algae, too. The only downside of Mexican turbo snails is that they cannot flip themselves to the correct position if they ever land on their back.

These snails are similar in appearance to the trochus snails. However, compared to trochus snails, they cannot flip themselves over, which causes an increased mortality rate.

Also, they prefer hair algae instead of green algae.

Famous for their substrate-cleaning abilities, these sea snails can eat film algae, diatoms, detritus worms, and uneaten fish food. Due to their omnivore dietary requirement, they are a must-have addition to your cleaning crew.

Just like with seaweed, snails do not directly feed on cordgrass. Instead, they are more interested in the fungi that grow over it.

Nevertheless, their feeding style is so aggressive that they chew off portions of cordgrass, allowing fungi to infest the plants even more. This can leave a false impression of them feeding on cordgrass.

Biofilms are the slimy films of bacteria that adhere to a surface. Although snails do not feed exclusively on biofilms, they consume the bacteria that cause their production. In other words, they reduce the biofilm from your aquarium.

Although these two are different, they are generally spoken in one breath. Not only for the sea snails, but these mollusks are also considered a great delicacy for humans.

Many deep-dwelling sea snails depend on carrion for food. These marine carcasses have a prominent role in fulfilling the dietary needs of marine arthropods and mollusks.

The cone snails are known to prey on fish in the sea. They throw a hypodermic dart (an advanced radular tooth) containing venom to inject their game.

Cone snails can even change the chemical components of the toxins they use in their venom.

For example, they will use worm toxins while preying on worms and fish toxins when hunting fish.

Yes, sea snails do feed on worms. They feed on every kind of worm if the opportunity strikes. For instance, Astrea snails, also known as ninja snails, devour bloodworms.

Barnacles are yet another favorite food for snails. The carnivore snails like the Dog Whelk (Nucella lapillus) are found in hordes consuming barnacles.

They push the barnacle’s plates and inject purpurin, a toxic compound, into the shell. This relaxes the barnacle’s shell and leaves it wide open. Then, the dinner’s ready.

These dog whelks also feed on periwinkles and mussels.

How Does A Sea Snail Eat?

A sea snail uses its radula (teeth) to scrape off algae from the source surfaces. They use it for cutting plants, scuffing algae, and converting them into bite-sized pieces before swallowing.

Most snails have radula. It depends on how they use them.

Some herbivore sea snails that use radula while collecting foods are periwinkles, limpets, and cowries.

As for predatory snails, they use a different technique to subdue their prey.

Whelks use an advanced proboscis, located in their head, to bore holes into shelled prey like clams and barnacles. They will then suck the nutrients from the prey through the drilled hole and satiate their hunger.

Some cunning snails like the moon snail will bury themselves in the sand and wait for their prey to come close.

Cone snails have the most peculiar hunting style of all the sea snails. They are keen hunters who throw off hypodermic needles underwater to inject their prey.

These needles are filled with venoms containing different chemical compositions, depending upon the prey species.

This poison dart can paralyze a moving fish. It has been found that a cone snail’s poison can even kill humans.

What Should You Feed Sea Snails Inside An Aquarium?

Do Sea Snails Eat Each Other?

Final Words On What Do Sea Snails Eat

The question itself is a vague one. It is like asking what does a mammal eat.

There are over 43000 species of snails that depend on different kinds of food. This sizeable, diverse group is why there is no single answer for it.

As for the carnivores, many of these snails feed on mollusks, barnacles, clams, and oysters. And some snails like the cone snails can even bring down a fish with its famous poisonous darts.