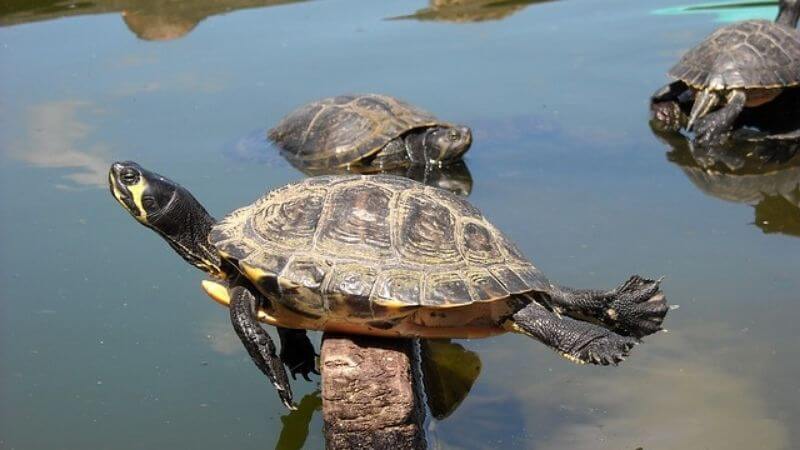 There are words for almost every group of animals. For example, a pride of lions, an ambush of tigers, an owl parliament, etc. But, what about a group of turtles? Do they even stay in a group?

Though turtles are solitary animals and like their own company, they can still be found in groups, stacking on top of each other.

So, when one spots such a group of turtles, what does he call them?

The etymology for these words dates back to a hazy couple of hundred years, so it might not be possible to trace who was the first one to name it.

So, Do Turtles Live In Groups?

Although turtles prefer their own company, they can live in groups, especially freshwater turtles. They are vulnerable to predators while basking. So, they stack and huddle together to show strength in numbers and fend off predators.

Despite being territorial, they will seldom be bothered by another turtle coming into their territory.

Turtles do not need social company. However, they aren’t against it, either. Often groups of turtles are seen basking on top of each other in ponds and near water bodies.

Here’s a picture of turtles stacking on top of each other:

What Do You Call A Group Of Baby Turtles?

What Do You Call A Nest Of Turtle Eggs?

The number of eggs in a turtle nest is called a clutch. Different turtle species lay different numbers of eggs. Sea turtles lay the most, about 110 on average.

Sentence using clutch can be:

Dorothy found a clutch of turtle eggs on the beach.

What Do You Call A Group Of Snapping Turtles?

A sentence using the word “bale” can be:

A bale of snapping turtles were found crossing the road.

What Do You Call A Group Of Sea Turtles?

It’s not a usual sight to see a group of sea turtles together. Unlike freshwater turtles, they do not stack on top of each other while basking.

Do Sea Turtles Migrate In Groups?

No, sea turtles do not migrate in groups. They forage and travel alone. They can migrate for thousands of miles to reach warm waters.

In February 2020, a turtle named Yoshi was tracked, covering a total of 22,000 miles from Australia to Angola and back.

When Do You See Turtles In Groups?

Freshwater turtles can be seen basking by stacking on top of each other’s shells to retain heat from sunlight. When the basking spot is congested, turtles huddle together on the same site to retain and transmit heat. They are often spotted basking on a log or rock near the water.

On the other hand, sea turtles are hard to spot in groups. Female sea turtles come to land only during nesting, so it might be possible to see them in groups at that particular time.

If you live in Florida, you might have a better chance to spot sea turtles nesting on the beach. The majority of nesting happens between May 1st to October 31st.

Let me list down the 10 best places to see sea turtles in groups:

Final Words: What Do You Call A Group Of Turtles

Often we find turtles basking in numbers on top of logs or rocks. They stack on top of each other to warm their body efficiently. This also helps them dive quickly into the water when predators come nearby, especially the birds of prey.

Unlike freshwater turtles, sea turtles aren’t found basking or living in groups. A single sea turtle will have hundreds of miles of space for itself.

Also, a sea turtle hatchling will swim for years before it ever sets its flippers on a beach.

Roaming for years in the sea all by itself, it will only return to land after hitting maturity, which is about 15 to 20 years of age. It will return to the same beach where it was born – to find mating prospects and continue nature’s purpose.