What Does Blue Light In Fish Tank Do? What About Red And Green? 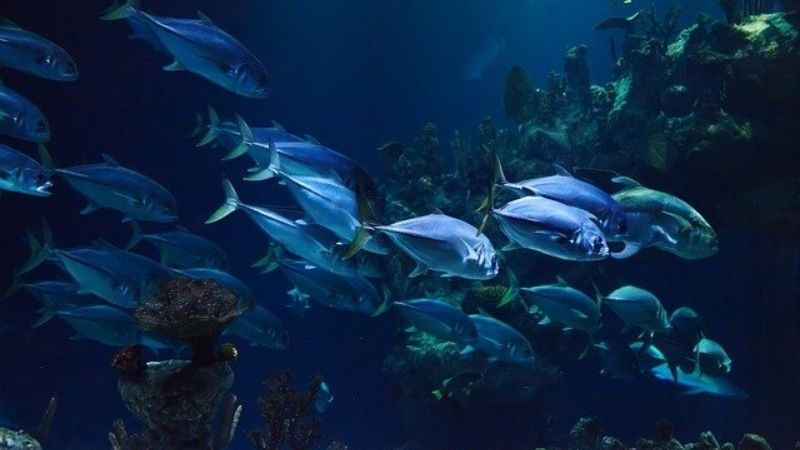 Blue lights are my go-to choice for a fish tank. I have always loved how they help mimic the ethereal look and charm of the nautical world. However, only a couple of years back, I discovered blue lights come with a host of other benefits besides enhancing your tank’s aesthetic appeal.

This blog will tell you exactly everything about what blue light in a fish tank does. And are red, green, or white lights better than blue lights? We’ll go over that too.

What Does Blue Light In Fish Tank Do?

Blue light helps to smooth out the transition between day and night. It mimics the moonlight. The sudden transition from bright to dark as the night falls can stress out the fish. Therefore, the calming effect of blue light helps to ensure a gradual transition to nighttime and prepares fish to slow down and call it a night.

The 3 Benefits Of Blue Lights In A Fish Tank

In the wild, lighting changes gradually. And as I mentioned above, blue light has a calming effect on fish. Fish accustomed to brightness throughout the day will get stressed when their environment suddenly transitions to darkness.

So, when you turn on the blue lights, it helps to mimic the moonlight as if they were in their natural environment.

If you’re reading up on the benefits of blue lights in a fish tank, you already know how stunning it looks. Blue lights allow the fish’s colors to pop without straining your eyes.

According to the color wheel, blue complements many colors like green, white, orange, and purple. And as you already know, these are the most commonly found colors in an aquarium.

Blue also helps emulate the nautical scene in the best way possible. No offense to anyone’s taste, but it definitely looks better than white, green, or red lights, doesn’t it?

Not all lights are created equal when it boils down to helping plants photosynthesize. The blue spectrum is hands down the most essential part of the light spectrum for planted tanks.

The blue spectrum spans around 380nm to 490nm, representing the onset of the visible light range of wavelengths within the electromagnetic spectrum.

As it turns out, these shorter light waves contain the most energy within the visible light spectrum, making them vital in terms of light energy that promotes photosynthesis.

To give you an example, blue light can make it down to more than 300 feet, whereas green light can’t go any deeper than 100 feet.

So, the next time you marvel at your unique planted tank setup, don’t forget to thank the short wavelengths of visible blue light.

Also, unlike some other colored lights, blue lights aren’t known to increase the temperature. Therefore, you need not worry about the fluctuating temperatures in the tank.

Can Fish Sleep With Blue Lights?

As calming as blue lights are, you shouldn’t turn them on throughout the night. Your fish will have a hard time falling asleep. Like us, fish are diurnal creatures. They need to sleep for 8-12 hours of darkness every night to fall asleep.

Regardless of the color, keeping the lights on at night will mess up their bodies’ internal clocks and stress them out. It will blur the boundary between day and night – and therefore, interfere with the fish’s physiological functions and behavior.

This, in turn, will weaken their immunity and expose them to a plethora of secondary illnesses.

It’s best to limit the blue light’s usage as a means of transition between light and darkness.

White Or Blue Light For Aquarium?

I prefer blue lights over white lights for aquariums because of their calming effect on the fish and promoting plant growth. It’s true that white lights illuminate the tank more and make it more visible. However, it fails to provide a smooth transition from brightness to darkness for your aquarium fish.

So, blue lights help diurnal fish sleep peacefully at night while making the tank just bright enough for nocturnal fish to come out and eat.

Also, white lights aren’t known to be as potent as blue lights to boost plant growth.

And this research reports that white light promotes the growth rate of algae compared to blue and red lights. So, I guess it’s best to stick to blue lights.

Does Blue Light Cause Algae In Fish Tank?

Yes, to an extent, blue lights cause algae in the fish tank since it’s pretty potent at helping plants grow. However, since blue light doesn’t emit additional heat, you should be fine as long as you don’t keep the lights on at all times.

Another benefit is that since blue light isn’t too bright, it won’t impede your sleep while facilitating your fish.

Should You Use LED Lighting For Your Fish Tank?

LED lights are the new kids on the block. However, they’re quickly topping the popularity charts. They are used widely due to their slim designs, shimmering effects and colors, cool functioning temperatures, and low cost. We recommend using LED lights over others because they generate a consistent shade of light throughout their lifetime.

Advantages Of LED Lights For A Fish Tank

Compared to other options like standard fluorescent lights, LEDs consume less energy to run. For example, LED aquarium lighting can use up to 80% less electricity than other aquarium lights.

So, your energy cost savings will easily alone make up the difference in the cost of the LED system in 12-18 months.

The most popular advantage of LED lights is their long life compared to any other traditional type. In this department, LED lights exceed by miles.

Although LED bulbs will cost you a bit more initially, you can save over $500-1000 that you would have spent on replacement bulbs had you used metal halide, compact fluorescent, or T5 bulbs.

LED lights do not emit heat as fluorescent light bulbs do. Therefore, these lights will not heat up your aquarium’s water. However, you will still need to ensure proper air circulation so the heat they emit doesn’t compromise the lifespan of the LED chip.

LED lights come in many different colors that you play up with to accent the tank however you like. These lights are marketed by spectrum ( in the Kelvin of K system) – so, you can choose the ones that suit your purpose.

For instance, the 8,000 K white spectrum encourages plants’ photosynthesis and complements your fish’s yellow, red, and orange shades. On the other hand, magenta and blue lights are best known to bring out the reds, blues, and greens while supporting fish to grow.

Most LED lights available in the market come with functions to dim and program, allowing you to tweak them to natural dimming at sunset and reverse at sunrise.

This feature is particularly suited for your nocturnal fish since dim blue light can be left on to mimic moonlight and encourage them to eat.

Today, you can even find LED light strips that mimic the monthly lunar cycle.

Since most LED lights are often arrayed in strips, they will offer relatively better coverage over a wide area of your aquarium.

LED lights boast of an impressive benefit – they generate a consistent color and intensity of light throughout their lifetime. This is a massive benefit over fluorescent lights that inevitably experience a change in the color spectrum from white to yellow over 3 to 6 months.

Disadvantages Of LED Lights For A Fish Tank

LED lights cost a bit more upfront than other options. And although you will have to pay more at first, you will easily make up for this over time in bulb replacement costs and energy savings.

What Does Green Light In A Fish Tank Do?

Green lights in a fish tank are not a good idea. Overexposure to green light in the tank is the number one reason behind nuisance algae development. It will quickly lead to a murky and repelling tank.

And since algae will directly compete with your fish for oxygen, it can slowly suffocate. And don’t even get me started on how it will cause the ammonia levels to spike.

What Does Red Light In Fish Tank Do?

Red light in the fish tank isn’t really advised. There’s a common belief that fish and reptiles can’t see red lights, but I didn’t find any scientific claims backing it. Red lights help shy bottom-dwelling species to come out and play in the tank.

According to this research, the growth rate in all the studied species decreased under red light. So, if you’re looking to grow young fry into healthy adults, we suggest sticking to blue lights.

The study showed that some species grew the best under green lights. However, note that green lights are strongly linked to unsolicited algae outbreaks.

But note that algae use red light to conduct photosynthesis. So, you need to be careful with that.

Do Fish Need Light During The Day?

Since fish are diurnal creatures, they need light in the daytime and darkness at night. Natural sunlight at noon has a rating of 5500 Kelvin. If your fish tank receives plenty of natural light during the day, you can get away with turning off the lights for a few hours.

However, fish need 10 to 12 hours of light every day. So, even if your tank receives a good amount of light during the day, you will need to turn the lights on at some point.

How Long Should You Keep Your Aquarium Lights On?

Both fish and plants need around 10-12 hours of light a day. Install a timer or buy a unit with an integrated timer to make it easier for you. However, note that algae love light too.

So, if you start to notice algae growth, cut back on the lighting duration.

How Much Light Does A Fish Tank Need?

Final Words: What Does Blue Light In Fish Tank Do?

Blue is the most preferred color choice for fish tanks, and for good reasons.

The main benefit of setting up blue lights in the tank is that it helps mimic the natural moonlight, calming the fish. It helps to seamlessly progress from brightness to darkness.

In addition to that, it helps to bring out your fish’s colors the best and boost plant growth. And blue light doesn’t mess up with the water temperature.

I could go on and on about why blue lights are great for fish tanks! If you’ve purchased them for your fish, let us know how you like them!