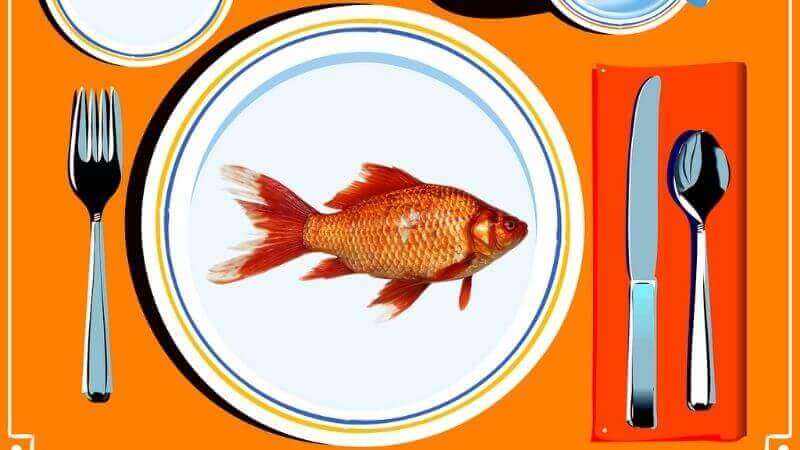 What Does Goldfish Taste Like? Really? Don’t worry. I’m not here to judge you. I’ll answer that in a minute.

But first, don’t forget to thank the Chinese for today’s most loved aquarium mainstay, the goldfish. They were domesticated about 2,000 years ago to be used as ornamental fish.

For most of the millennia, goldfish were seen as a symbol of fortune and luck. And today, if you see them as gourmet meals, well… each to their own.

So, without beating around the bush, let’s find out what these fish taste like!

Pet goldfish taste like the food they’re eating. So they’ll taste like pellets or flakes you give them. On the other hand, ‘wild’ goldfish are described to have a muddy taste. Goldfish are super bony fish. Deboning them would take a lot of time and a pair of skilled hands.

So, frankly, goldfish aren’t really worth it. Stick to trouts, please!

Also, I found this Reddit post, and I think I laughed a little more than I should have.

And by the way, are you interested to find out where the public stands on what goldfish taste like and if one should eat it?

What Does Goldfish Taste Like? Real Answers By Real People!

Note: All the comments belong to the respective authors!

“Goldfish are super bony, scavenging fish with a reputation for having a ‘muddy’ taste that can be eliminated through proper handling and cooking.”

“Wild goldfish are just as edible as any other freshwater fish if you choose to eat them. But note that it’s a very bony fish with a muddy taste. So don’t expect to taste it like trout – that’s for sure!”

“I eat European Carp from the River Murray. So, I expect goldfish to taste similar. They’re best roasted. Skinning will get rid of a lot of the muddy taste that comes from the fat, not flesh.”

“Goldfish would taste a lot like carp, which is the water they live in – mud, poop, leftover food and all.”

“You can certainly eat them like trout or any other fish, but don’t expect them to taste like tuna.”

“Please don’t eat aquarium fish. Most often, they aren’t food-worthy specimens. Also, most aquarium products strictly state not to use them on fish intended for consumption.”

“In reality, there’s no such thing as wild goldfish, except for the ones some duffers release into the wild as invasive species. Goldfish were domesticated from Prussian carp in ancient china, which is still used as food in many parts of the world.”

So, it looks like the public doesn’t really second the idea of eating goldfish. And 9 out of 10 times, they’re described to have a funky, muddy smell.

Now, if you’re still not convinced why it’s not really a good idea to eat goldfish, keep reading!

Why Is It A Bad Idea To Eat Goldfish?

At eateries, you’ll see fish like tuna, trout, salmon, and tilapia on the menu. But have you ever seen goldfish? No. That’s because they’re neither the tastiest nor the healthiest fish to eat:

Let’s look at some of these reasons in detail below!

In simple words, goldfish taste like what they eat. So, if you’re planning on eating your pet goldfish, there’s a good chance that it tastes like pellets or flakes. And these commercial foods are made with ingredients like earthworms, squid meals, and fish meals.

If you have ever been daring or curious enough to smell their food, you’ve probably withdrawn quickly and resisted the gag reflex.

The saying “you are what you eat” really applies to goldfish.

And if you think maybe wild goldfish don’t taste so bad, you’re living in denial, my friend.

Like all carps, in the wild, goldfish swim at the bottom for the most part.

Thus, they most likely taste like mud and detritus even when fully cooked.

Goldfish have a notorious reputation for being an invasive species and introducing diseases into different water bodies in the States and elsewhere. So, I’d recommend keeping a safe distance between goldfish and your chops.

For example, goldfish often carry a bacterium known as mycobacteria – aka fish tuberculosis. And yes, it can be transmitted to humans.

What’s sneaky is that this pathogen is asymptotic in fish – so you never really know if the goldfish, aka your next prospective meal, has it or not.

And like most other bacteria and parasites, it can survive even the most rigorous cleaning and cooking process. So, please think long and hard before you decide on eating goldfish.

Are you still not convinced? Okay, I’ll give you one last reason.

Another good reason goldfish don’t make delicious meals is because they tend to be a lot smaller compared to their carp relatives. Therefore, deboning and preparing the fish can be a real pain in the neck.

It would take so much time and yield a small amount of meat. Trust me, it wouldn’t be worth it.

Is It Illegal To Eat Goldfish?

In the US, no laws prohibit the consumption of goldfish. But apparently, it’s illegal to eat live goldfish in Wales.

In 2015, a Welsh man was caught eating a live goldfish at a local fair. He was then arrested, fined £200, and banned from owning any pet for 3 years. Yikes!

Is It Safe To Swallow A Live Goldfish?

The ‘goldfish swallowing’ trend has grown steeply, thanks to social media uproar in the last decade. The dare involves eating a live goldfish and swallowing it whole. Besides being downright heartless towards the fish, it can lead to a serious choking hazard.

A video on YouTube showed a man eating and then vomiting a live goldfish immediately. So, now we know that goldfish don’t die immediately when consumed alive.

Imagine what a slow and stressful way to die it is. So so inhumane!

How To Prepare Goldfish To Eat?

Since goldfish are carps, I’ll answer this question as if I was answering for carps. Sorry for that wordy sentence!

And let’s assume you caught the goldfish in the wild. IT’S NOT YOUR PET GOLDFISH, I HOPE!

Place the fish on the ice immediately after catching it. You should then remove and clean out the bloodline.

For instance, if they live in clean water with healthy vegetation, they will taste good. But if they come from a dirty environment, they will probably taste bad.

Goldfish are bony fish. So, the rib bones fork into several prongs that can pose a problem when fileting.

The size will also dictate how well your goldfish is going to taste. Larger fish will, of course, have heavier textures and stronger flavors.

It is strongly recommended that once you catch the carp that you’re planning on eating, you give it some bucket time. You’re supposed to leave the fish in a clean bucket of water and fast it for a couple of days so it can detox.

It’s also equally important to keep the goldfish on ice to preserve the meat’s flavors. That’s because once the body temperature rises, it will increase histamine release in the body.

And histamine dictates how ‘muddy’ the fish is going to taste.

On top of that, if histamine levels are too high, you can even get sick from eating the meat.

How To Cook Goldfish?

Goldfish can be cooked the same way you’d cook other carp. If you’re stubborn enough and commit to going through all the hassles of cleaning and deboning, you can just fry them in breadcrumbs with PLENTY of seasonings like pepper, dried oregano, and parsley. And don’t forget to use high-quality extra virgin olive oil.

But please don’t. I wrote this just for the sake of writing!

Here are a bunch of the most frequently asked questions on goldfish. Don’t miss them!

Are Goldfish Edible To Eat?

Yes, goldfish are edible to eat if they aren’t heavily treated with harmful chemicals. Goldfish’s forebears, Prussian carps, are still consumed widely in the oriental region to this day.

Can You Eat Goldfish From A Pond?

Yes, you can eat goldfish from a pond. But it’s not really recommended. First, the fish may be a carrier of different harmful pathogens. Second, the pond may be treated with various chemicals and fertilizers that are toxic to humans.

Can You Eat Goldfish From A Lake?

Goldfish aren’t naturally found in just about any lake. Furthermore, their native population in the wild doesn’t exist as they were domesticated from Prussian carps 2 millenniums back.

So, if you find a goldfish in a lake, I’d say it’s not really a good idea to try to eat it as the fish most likely was an aquarium pet before.

Like all pets, the goldfish in question may have undergone chemical treatment and medication that’s harmful to humans if ingested.

As I mentioned above, there aren’t really ‘wild’ goldfish to exist. But if you find one and decide to cook it, it’ll most likely have a strong muddy flavor. Or it may have a ‘moist and flaky’ taste like most carps do.

Can You Eat A Giant Goldfish?

Yes, you can eat a giant goldfish if you choose to. They’ll probably be meatier and easy to debone than their smaller counterparts. Good luck!

Goldfish don’t taste great. Those who’ve tasted it describe that it either tastes muddy or like the commercial food they eat.

Plus, it’s not really safe to eat goldfish. They can carry all sorts of diseases like fish tuberculosis, that’s even contagious to humans!

But above all, why did this thought even cross your mind?!!