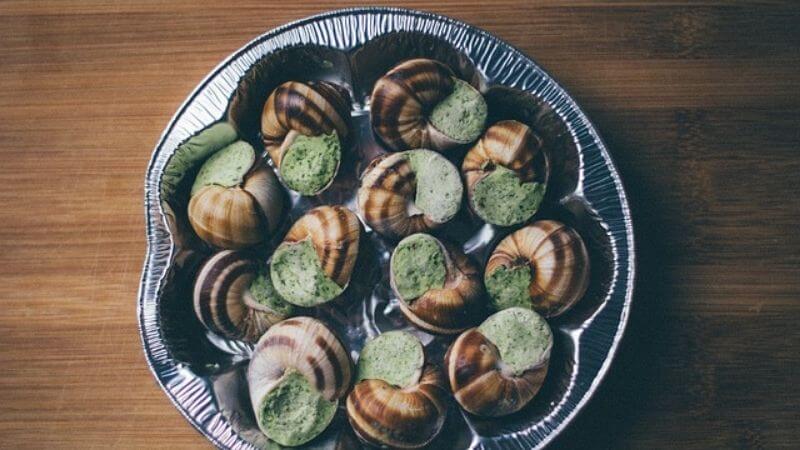 Escargot, a dish consisting of cooked land snails, is a popular delicacy in France. However, the French aren’t the only ones who savor this dish.

People from all parts of the world consume snails. For example, it is consumed in Cyprus, Malta, France, Greece, Germany, Morocco, Algeria, Tunisia, England, Italy, Spain, India, and Nepal.

On the flip side, many cannot imagine putting one in their mouth.

So, what does a snail taste like? Let’s find out.

Some describe snails taste buttery, chewy, and almost like popcorn. At the same time, some find their texture similar to chicken, mussels, or mushrooms. Many exclaim that they have an earthy aftertaste if eaten without sauce or seasonings.

However, snails aren’t eaten raw. The escargot recipe includes parsley, butter, garlic, breadcrumbs, and shallots. So, it can be hard to tell the authentic taste.

In Paris, the escargot dish is heavily infused with garlic. This is why most people claim that garlic and sauces mask the whole dish.

Snails can taste different for different people. Here are some honest opinions from people who have tasted snails:

“They are surprisingly good. Their taste is similar to scallops. I tried the one that was drenched in butter and garlic, which overpowered the dish.”

“I found them tasting funny and close to clams and oysters.”

“Snails taste like snails. I found its taste to be similar to squid hood and mussels.”

“I have had snails in every country where they are served. I remember my first time eating snails – I didn’t like it. It wasn’t until I was invited by a French guy to taste snails. I like the texture when accompanied with butter and garlic. It is chewy and yummy, similar to mussels, but gooier. In Asia, the snails are made with spices.”

“I always worried about the texture before I had my first escargot. But my first experience unfounded my perspectives about it. It isn’t really different than eating clam chowder or calamari. It has a firmness similar to that of a mushroom – just squishier.”

Are There Any Benefits Of Eating Escargot (Snails)?

Snails are rich in numerous nutrients. They have abundant in protein, iron, zinc, and calcium. They also contain vitamin A, E, K, PP, and whole-group B.

They are calorie-rich and only contain a tiny amount of fat.

Research has shown that people who eat snails have a minimal risk of contracting osteoporosis (brittle bones).

Snails are a great source of magnesium. Eating them will have a calming effect on the nervous system. In addition, dieticians claim it amplifies lipid metabolism.

As a nation of a la carte cuisines, the food industry in France is treated more as an art rather than a basic amenity. It is a country where recipes are no lesser than the holy scripts.

And among these delights, snails occupy a special place.

The first humans ate snails about 30,000 years ago. And later in ancient Greece, further importance was stressed by the father of medicine, Hippocrates, who studied them and proclaimed that snail mucus could do wonders.

He went on to say that eating snails had benefits like skin hydration, regeneration, and healing. So, he prescribed it to patients with hernias and digestive disorders.

Centuries later, the Roman empire included snails in their empirical cuisine. First, the Romans built farms to grow snails and later turned this luxury dish into a staple diet for armies.

Despite my hazy memory, I believe it was Pliny the Elder, a Roman historian, who said in his journals that a man named Fluvius Hirpinus was the first large-scale farmer to cultivate snails.

Since then, eating snails has been customary in European countries.

However, in the United States, it isn’t quite popular. It is served only in some exquisite European-themed restaurants.

But if you think escargots are only available in vogue restaurants, you are mistaken. In Asian countries, snails are common street food.

Do You Eat Snails By Chewing?

Most first-timers tend to swallow snails whole instead of chewing. This is a normal tendency to do because snails are slimy when alive. However, cooked snails are firm and meaty.

So, do not put yourself at risk of choking by swallowing them whole. Plus, you will miss out on a flavorful dish if you eat it without chewing.

How Do You Eat Snails? The French Way

Did you know that the French people consume more than 16,000 tons of snails annually? This hints that they surely know more about cooking snails than most nations.

Here’s a popular french escargot recipe for you to prepare:

Take a tablespoon of butter and heat it in the pan. Now, add shallot and saute. After they soften, put snails and stir for about two minutes.

Add garlic, 5 tablespoons of butter, and parsley into the blender. To make mixing even better, pour white wine.

Lay each snail on the escargot slot and cover them with one and a half tsp of garlic butter paste. Sprinkle bits of breadcrumbs on each compartment.

Now, place them in an oven and bake at 375 degrees Fahrenheit for about 12  to 15 minutes. Baked escargot turns brown.

Cut the baguette into thin slices, about a quarter of an inch. I approximated this to match the size of the snails that I have.

Now, melt about 4 tbsp of butter and brush the bread’s surface using a pastry brush.

Turn the oven to broil. Take the butter-brushed bread and place it in the oven. Broiling toasts the bread. Make sure you watch it closely, or it will get burnt.

Take out the snails from the oven and keep them separately. Now, serve the snails with the toasted baguette and a glass of chardonnay.

You can have escargots with every kind of meal. You can have them for breakfast, lunch, or dinner. Let me list down the foods that go best with escargot.

You cannot go wrong with South Asian Style, i.e., with rice. Also, grilled vegetables will be an excellent choice for lunch.

If you want to have a light dinner, escargots are a perfect choice. Have them with stewed, fried, or grilled vegetables. Other dishes for dinner could be snails with cheese or porridge.

Can You Eat Garden Snails?

Yes, garden snails are edible and are consumed all over the world. They are sold as canned foods in departmental stores and supermarkets.

However, there are things that you should take notice of before eating them.

Have you been using pesticides or insecticides in your yard? If yes, it isn’t a wise choice to eat these snails.

Snails are a prime carrier of germs and pathogens. So, you need to cook them on high heat. For example, garden snails can carry worms that cause schistosomiasis.

Ensure that you at least cook them at no less than 165 degrees Fahrenheit. This will kill the worm.

Snails eat all sorts of food in the wild. A disgusting dietary choice could be carrions. This is why many snail lovers (snail-eaters) feed oatmeal to their snails to keep the digestive tract clean.

Therefore, feeding them oatmeal for a couple of days will ensure they are healthy to eat.

Canned escargots are widely available now in the US, too. With the availability of recipes all over the internet, you can get the exquisite taste which French revere the most.

Or, if you are the type who loves devouring Indian takeaways, you can add some spices to the escargot.