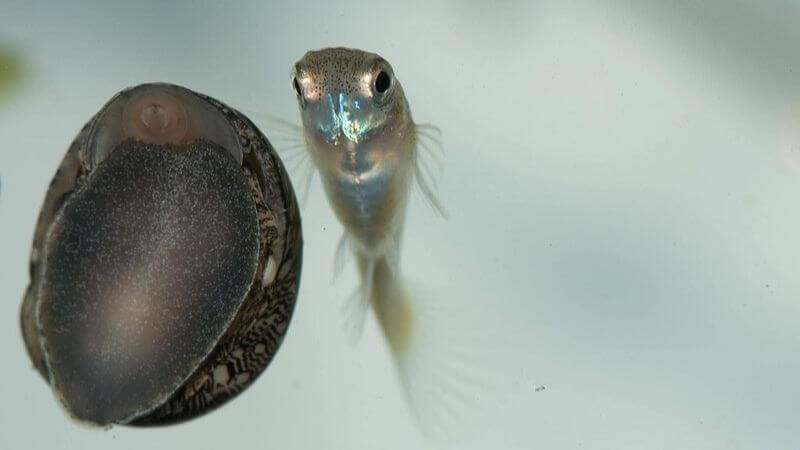 There’s no doubt that nerite snails make a fine addition to your cleaning crew in an algae-infested tank. Furthermore, their eggs do not hatch in freshwater, which is a plus if you want their population under check.

However, these infertile eggs can still bug you. Unlike most freshwater snails, nerite snails do not lay their eggs in clutches.

Instead, they deposit their eggs singly, attaching them to plants and props in the tank. It can be cumbersome to scrape and remove these pesky little balls. But if you are adamant about wiping them out, you will need some helping hands.

So, are there any fish or other invertebrates that eat nerite snail eggs?

Yes, some fishes and critters can eat nerite snails’ eggs.

Let me brief them in detail.

Only a handful of creatures can weed out nerite snail eggs from the tank. They are clown loach, pea puffer, zebrafish, lizard catfish, dwarf chain loach, crayfish, Amano shrimp, and assassin snail.

Clown loach is the top choice for many hobbyists when there’s a proliferation of nerite snail eggs in the tank.

Yes, these loaches are incredibly efficient in doing their job – eating snail eggs. But most people do not realize how big these fishes can get.

A clown loach can grow up to 9 inches on average as an adult. And if you are keeping a school of them (preferably 5), you will need a bigger tank.

But the silver lining behind keeping them is that they grow at a slower pace – buying you some time.

One thing I’d like to advise you about keeping these loaches is that they will not be able to help you immediately if there are too many of these snails and their eggs.

So, if you want them to help you get rid of the nerite snail eggs, make sure the water parameters are ideal and stable at all times.

Pea puffers are hardcore carnivores. They will consume both nerite snails and their eggs to meet their protein demands.

I recommend you keep at least 6 to 7 pea puffers in a 20-gallon tank to see them doing what they do best – eat nerite snail eggs.

But if you are keeping only one or two puffers, you won’t see a noticeable decline in the number of infertile eggs.

Zebrafish, commonly known as zebra danios, is a popular freshwater fish. Their small stature (1.5 inches long) lets them go into nooks and crannies and devour the eggs attached in remote areas of the tank.

Although lizard catfish are lanky, reaching up to 4.4 inches long, they can roam through tight spaces and pry snail eggs.

With most predator fish, there is an equal chance that they will prey on your snails along with the eggs.

However, you need not worry about lizard catfish, for they will not go after your snails.

They will spend most of their time near driftwoods feeding on biofilms, where the nerite snails mostly attach their eggs.

The size of a fish is directly proportional to the size of the food they intake. Therefore judging by their size, the nerite snail eggs are a godsend meal for these loaches.

In the wild, crayfish are natural predators of nerite snails. So, it is in their instinct to devour nerite snail eggs.

But remember that crayfish can also target your nerite snails. So, you need to relocate the crayfish once it grows bigger than the snail.

Widely known for their algae-eating prowess, Amano shrimps are a great addition if you want to get rid of algae in your tank. And after finishing algae off the tank, they will turn on nerite snail eggs.

Their voracious appetite makes them effective in controlling snail egg outbreaks. Not only do these shrimps eat snail eggs, but they also eat the snail itself.

So, be mindful of that when you keep Amano shrimps with nerite snails.

But, if there’s a snail infestation in your tank, Amanos will definitely heed your call.

Although assassin snails do not eat nerite snail eggs, they help you control egg infiltration by eating the forebears of these eggs, adult nerites.

Why Is It Hard For Fish To Eat Snail Eggs?

First, the nerite snails’ eggs are tiny, and secondly, they do not lay them in clutches as other snails do. These eggs are dispersed all over the tank, especially on the driftwoods, decors, and glasses, making them difficult to scrape by bigger fish. Only fishes smaller than 2 inches will actively pursue these eggs.

Now, let me further explain why even some smaller fish species do not go through the trouble of eating nerite snail eggs.

There’s a theory called the behavioral ecology model that animals and creatures of all sorts use when searching for food.

An animal requires energy and time to search and capture food. So, this theory suggests that the animal will naturally use the most economically advantageous foraging pattern to minimize its energy investment and time.

Did you know there’s even a formula to calculate this?

However, we will not be geeking on that topic today.

What I mean to relay through this theory is that a predator fish or invertebrate will have to spend a considerable amount of energy and time to find and consume the dispersed nerite snail eggs than other snail eggs found in clutches.

The nutrition these predators get after consuming a single egg will not be ample enough to fuel their energy in finding more of these scattered eggs.

So, the smaller fishes are better off leaving these eggs alone.

Other Ways To Get Rid Of Nerite Snail Eggs

I hate to break this to you, but I have found many aquarists not succeeding at getting rid of nerite snail eggs even after keeping them alongside predators.

So, I recommend you try the following methods to rid of nerite snail eggs:

It can be tiring to scrape every single one of these eggs off the driftwood. But we need to accept that we can’t change the outcome. So, plan ahead and dedicate one whole Sunday.

It is more of a preventive measure than a solution itself. But it is hard to distinguish male from female nerite snails by observing their physique.

There lies an equal probability of getting either a male or a female nerite snail.

Males have a flap under their right eye, but it is hard for the untrained eyes to identify them.

For that, you can put them in a separate tank or a container and wait and see which one lays eggs after a week.

Regular cleaning can help you spot these eggs early. Once you spot them, make it a routine to scrape them off using a stainless metal blade.

I have often found that nerite snails like to attach their eggs to the driftwoods. So, you need to take the driftwood out and dry it outside in the sun. This will dry the adhesives under the eggs, making them easy to pluck.

This technique is effective if you are planning to control the snail population. First, put a large cucumber inside the tank.

Nerite snails love cucumber, and they will all go gaga over it. And once they attach their slimy legs to the cucumber, take it out along with the snails. This will help you eliminate a significant number of pest snails at once.

To be honest, there are not many fishes that eat nerite snails. These eggs are too small for bigger fishes to feed, and the smaller fishes cannot consume many at once.

Also, the optimal foraging behavior is to be taken into account.

Even the fish I recommended earlier may not guarantee success in removing snail eggs from your tank.

So, the most viable remedy for this problem is to prevent it before it’s too late. Therefore, I advise you to keep only male nerite snails in the tank.