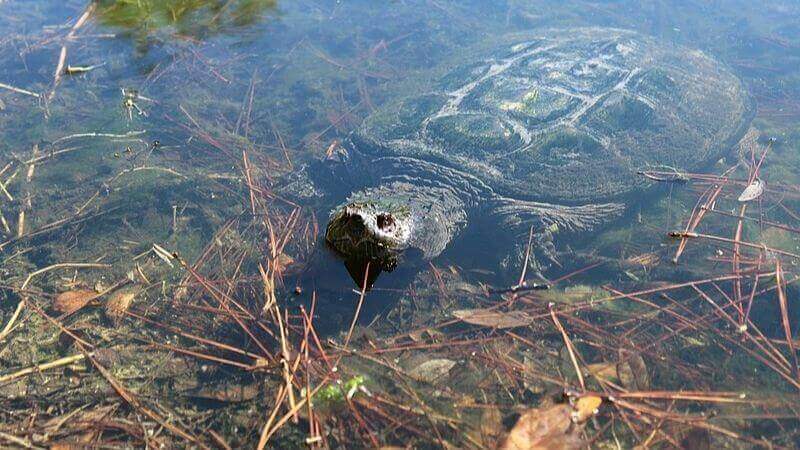 Turtles have existed on this planet for millions of years. They have successfully outlived dinosaurs thanks to their robust shells, and I wouldn’t be surprised if they outlive us, too.

It is understandable to believe that their hardy shells can protect them from every kind of predator. But despite this protection, they can still suffer at the hands of many assassins.

The turtle eggs and newborns get preyed on by so many different animals – some you’d be surprised to know of. Therefore, turtles have evolved to mass-produce by laying hundreds of eggs at a time.

Let’s dwell further on the carnivores that prey on turtles in a pond.

Water snakes and turtles share the same habitat for the most part. And they can grow over 4 feet long. They are opportunistic carnivores who prey on amphibians and small reptiles.

They are fast breeders and lay about 90 eggs at a time, which explains their wide presence all over US ponds. In addition, they can open their mouth 4 times its original size. This shows their ability to devour the turtle’s wide shell.

Native to central and eastern United States, largemouth bass depends on a wide variety of prey in the wild, and turtles fall under it. They grow over 20 inches and weigh about 25 pounds.

Largemouth bass can devour small mammals, turtle hatchlings, and even alligator hatchlings. They are an invasive species, who create havoc and lead to a sharp decline of prey population everywhere they go.

They have sharp teeth, which can tear turtle limbs with ease. And as their name denotes, they have wide mouths, which helps them devour even fully grown semi-aquatic turtles.

American bullfrogs are ever hungry, ambush predators that prey on almost all animals smaller than them. They can be anywhere from 4 to 6 inches in length and weigh about 1.5 pounds.

They share the same swampy habitat with turtles. This is why you will encounter these frogs even in your outdoor pond.

Adult turtles aren’t intimidated by a bullfrog’s size. However, these frogs will not think twice before devouring turtle younglings. They will overpower and stuff down tiny turtles when hungry (which is all the time).

So, it is recommended that you do not keep baby turtles in outdoor ponds. Instead, wait for at least 2 to 3 years before letting them out and keeping them safe from frequent encounters with bullfrogs.

Jackfish dwell in warm lakes and slow-moving rivers. They have a piscivorous diet, which includes other fish, aquatic animals, and invertebrates.

Their infamous sharp teeth can crush down turtle shells with little hassle. Adults reach about 4 feet in length and weigh 70 pounds, enough to overpower grown turtles.

Jackfish are powerful swimmers who can easily hunt down turtles, especially in a confined area, such as a pond.

Did you know that more than half of the world’s catfish species are found in the US? Their invasive characteristics allow them to thrive everywhere. As a result, they have already been listed as pests in some parts of Florida.

Catfish can grow over 6 feet in length. For example, a blue catfish found in the Missouri River weighed about 130 lbs.

Depending on their palate, catfish have diverse feeding behaviors. They can be herbivore, carnivore, omnivore, and even limnivore (feeding on microorganisms that consume mud). So, it isn’t a surprise to see a catfish snacking on turtles.

Snapping Turtles (Both Common And Alligator)

Snapping turtles, one of the largest among freshwater turtles, are also known to consume other turtles. They are omnivores and will feed on plants, animals, insects, fish, birds, snails, snakes, worms, crayfish, and even their own species.

They will eat both live and dead turtles, even other snapping turtles!

Instead, they will bide their time and wait till one gets near it. Then, it uses its worm-like tongue to lure other turtles and prey when near.

Many aquatic turtles live in the same habitat as alligators. As a result, a turtle can easily become an alligator’s meal. Though the turtle shell is a robust protection against predators, it will not be enough to protect it from an alligator’s 2000-pound bite force.

Here’s a clip of an alligator killing a turtle (Viewer discretion advised):

Found widespread all over North America, river otters are excellent hunters who use every form of tactics to bring down their prey. They are well versed in hunting on both land and water.

Their faster metabolism makes them hungry quickly. In addition, they have thick fur, which keeps them warm while swimming.

During winter, they can match a trout’s speed, let alone a turtle’s. Also, their sharp teeth, along with improvising skills, help them break a turtle’s shell and eat it.

Their hunting instincts have adapted so well that they know the turtles are powerless on land, which is why they carry turtles in their mouths and bring them to land.

Birds of prey like eagles, hawks, and falcons will easily find their way to prey on turtles. They will carry turtles high up in the sky and drop them onto rocks. This will break a turtle’s hardened shell and leave the flesh exposed.

Other predatory birds such as owls, crows, and bitterns also feed on tiny turtles.

Aquatic birds like ducks and herons can eat smaller turtles, along with their main diet (fish).

Final Words On What Eats Turtles In A Pond

As feisty and powerful as turtles are, they don’t sit at the top of the food chain. They’re, in fact, a meal for several predators – some unlikely – in the wild.

To name a few, water snakes, catfish, alligators, and river otters are a few animals that can easily consume a turtle.

Baby turtles are most vulnerable when kept outdoors. So keep them in an indoor tank with all the right parameters checked.

You can keep your turtles outdoors only when they have reached adulthood.