What Fish Eat Guppies? Their 7 Archenemies 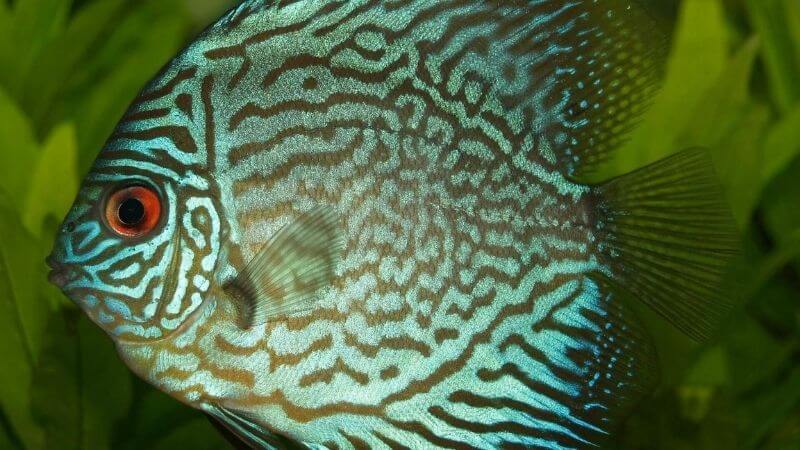 Despite being at the bottom tier of the food chain, it’s incredible how guppies have colonized entire water bodies in many parts of the world. But that doesn’t come naturally. They’re quite easily the favorite snack for many bigger fishes. So, let’s explore what fish eat guppies.

Guppies have smaller bodies and brighter colors, making them easy targets for predators. In the wild, cichlids, jumping guabine, and blue acara are the most common guppy predators. In the tank, big fishes like leopard bush fish, goldfish, clown knife fish, and large angelfish can quickly eat an adult guppy.

Now, let’s have a detailed look at predators mentioned up and some more.

What is The Best Guppy Male to Female Ratio? Urbanfishkeeping

Do Guppies Sleep? | Your Ultimate Guide on Guppy’s Sleep Cycle

What Fish Eat Guppies in the Wild?

Predators have played a significant role in guppy’s evolution. In the wild, the most common guppy predators are Cichlids, Blue Acaras, Jumping Guabines, Tigerfish, Fat Sleepers, Rivulus, and Golden Trahiras.

Native of the African Great Lakes, cichlids, are widely distributed along South America’s waters, where they share home with guppies. They’re the most prolific guppy eaters known to man yet.

Rams and Kribs are small riverine cichlids that display a much kinder demeanor towards guppies. However, we can’t completely rule out the threat.

Cichlids have long bodies that allow them to swim quickly. The fast-moving, strong jaws also pose a great benefit when hunting prey.

In places where cichlids outnumber guppies, it’s hard for fry to live through adulthood.

Guppies in these areas have evolved to have specific strategies that allow them to coexist with cichlids. For instance:

Blue Acara also belongs to the Cichlids family and shares the common habitat with guppies in South America.

These omnivore fish love to relish on live guppies alongside minnows, shrimps, and brine shrimp.

Blue Acaras loves to hunt down guppies that are oblivious to their presence and do their own thing. On the other hand, they’re more considerate to guppies that are inquisitive and love to inspect.

Jumping Guabines, just like guppies, are found throughout Trinidad and Tobago—from large rivers to muddy puddles.

Although small in size themselves, these fish are ravenous guppy eaters.

The body is stretched out, cylindrical, and streamlined with cycloid scales. Thus, they can swim very fast.

As the name suggests, they are excellent jumpers. They can jump as high as 14cm to catch prey from guppy shoals.

Some other wild predators that have had the biggest impact on shaping guppies’ evolution are:

What Fish Eat Guppies in the Tank?

The threat for guppies doesn’t end with captivity. There are several large and common aquarium fish that’ll happily gulp down a guppy. Some of them are goldfish, leopard bush fish, goldfish, clown knife fish, and large angelfish.

This time, you can totally judge someone based on their looks. Leopard Bush Fish are as fierce as they look.

They’re also quick-witted. They will remain still and patiently among plants and attack suddenly when prey passes by.

Thanks to their natural preying instinct, a Leopard Bush Fish can quickly gulp down fishes as big as an adult female guppy in the tank.

While researching for an article, I came across an owner who shared that his Leopard Bush Fish took down 30 guppies in a tank except for two big ones.

For many like me, adding guppies and goldfish in the same tank is just wishful thinking. They don’t only have different needs but also don’t get along well.

A large goldfish can easily gobble down an adult guppy, while all goldfish love to prey on little guppy fry.

Big goldfish species like shubunkins and comets can easily fit a guppy into its mouth. On top of that, the risks are even higher with fast-moving goldfish like ranchus, fantails, and orandas.

However, we can’t rule out peaceful coexisting between guppies and smaller goldfish. There are instances where they’ve got along with black moors, twisty tailed, and chalily.

Clown Knife Fish are as dangerous as they sound—at least for fish like guppies.

These nocturnal fish have two nasal tentacles above their big, toothed mouth, in addition to their natural preying skills.

And although Clown Knife Fish and guppies will never share a tank due to their distinguished needs, guppies will make a great addition to a clown knife fish’s diet.

In addition to guppies, they love feeding on other feeder fish like Oscars and Rays.

Oscars also come from the cichlid family—making them guppies’ natural nemesis. Oscars are found in the South American waters, where they love to prey on guppies as part of their staple food.

Although sluggish in nature, Oscars are proficient at swimming short distances rapidly. This attribute helps them hunt down petite fish like guppies.

Oscars are also very aggressive and intelligent. Thus, they aren’t actually suitable to keep with any smaller fish. That way, you’ll only end up with a fat Oscar.

There are several aquarium fish that feed on guppy fry. Some of them are Betta, Angelfish, Dwarf Pufferfish, Gouramis, and Swordtail Fish. A large Angelfish can even take down an adult Guppy.

How Have Guppies Evolved to Escape Predators?

Guppies are incredibly clever fish, which evolved to thrive anywhere they go over millions of years. Here are some ways guppies escape predators:

Conclusion on What Fish Eat Guppies

Living at the bottom tier of the food chain, guppies have many predators—in the wild and in the tank. In their native habitat, Guppies are preyed upon by Cichlids, Jumping Guabine, Blue Acara, Tigerfish, and Golden Trahira. And in a fish tank, predators like large Goldfish and Angelfish, Oscars, Clown Knifefish, and Leopard Bush Fish can eat guppies effortlessly.

Relevant Articles To Read On Guppies: