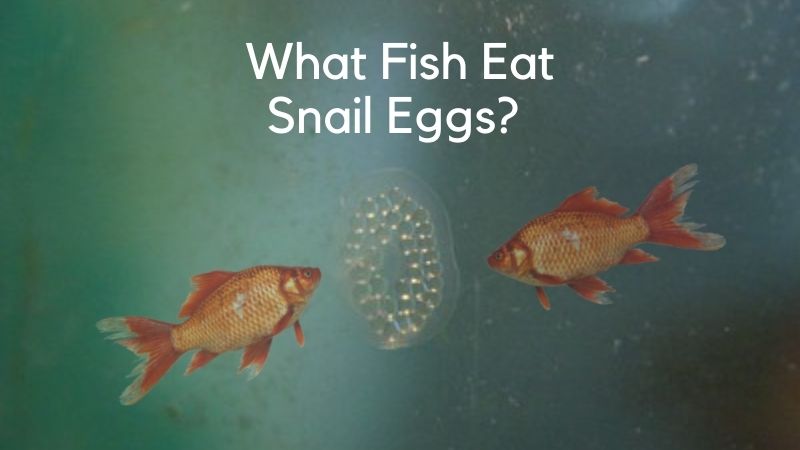 Snails are an excellent addition to your cleaning crew to get rid of excess food and the waste that your fish produce. Unfortunately, however, most people undermine their ability to breed rapidly – resulting in a snail infestation right under their noses.

So, what should you do to prevent this from happening? Of course, the first thing you have in mind is not letting those eggs hatch. And if you are someone who doesn’t like to get their hands dirty, you might want to opt for a more natural solution, like introducing fish that eat these eggs.

But not all fish are made the same. Not all of them eat snail eggs.

So, in this article, I will recommend a few recruits that will eat these clutches and prevent snail influx in the tank.

Disclaimer: There’s no guarantee that all of these fish might eat snail eggs in your tank. It boils down to the fish’ preferences. So keep experimenting if the carnivore from the recommended list doesn’t fancy eating snail eggs.

This fish from the loach family is a bottom dweller, which means it will have frequent encounters with snails and their eggs. And it is a scavenger, too. Double whammy!

However, kuhli loaches have a calm temperament and will not go after your snails if they are of a decent size. They will instead get busy scavenging the substrate rather than preying upon snails.

And while grazing, if they happen to come across snail eggs, they will not hesitate to devour them. But do not take these loaches to be natural predators of snails.

Although dwarf chain loaches prey on smaller snails, they don’t really have a knack for eating snail eggs.

They occasionally feed on soft plants, which is a good thing if you are trying to control snail infestation because snails usually lay egg clutches glued to the plants. And if the dwarf loach spots some of them while grazing, they will surely eat them in the process.

Goldfish are natural predators to snails. However, they only eat the ones they can fit in their tiny mouths. Usually, goldfish won’t pluck the eggs that they find attached to the driftwoods. But if you scrape them off, the goldies will definitely eat them. I know a few hobbyists who feed snail eggs to their goldfish.

Remember that if you don’t see your goldfish scraping the clutches on their own, you need to do it manually. And if they are reluctant to eat, you need to starve your goldfish for a day or two. Once they realize food scarcity, they will satiate their hunger by feeding on snail eggs.

Although the apple snails you have in your aquarium are too big for kois to fit in their mouth, they will still eat snail eggs and the juveniles.

Like the feeding method I mentioned earlier with goldfish, you need to do the same with kois.

Scrape off the eggs using a plastic spatula, and serve them to your kois. If they are hesitant, starve them for a day, and you will have a school of hungry kois looking forward to devouring anything they can fit in their mouth.

Before you hire a clown loach to feast on snail eggs, you need to know that these fish can grow large and will target your snails, too. But the good thing is that if you already have a snail infestation problem, adding clown loaches is the way to go.

They will quickly hunt down snails by sucking their bodies from their shells.

So, once they are stuffed after preying on snails, you will need to manually take the empty shells out of the tank. Leaving it inside the aquarium will only aggravate the bacteria growth.

As for loaches consuming eggs, if they manage to quickly get the clutches off their glued spot, they won’t have any problem gobbling down these yummy protein sources.

Although plecos do not usually eat snail eggs, I have added them to this list because of their ability to suck snails out of their shells. This does help prevent snail infestation.

But just because they do not scrape the clutches off the driftwoods and plants doesn’t mean they don’t eat when offered. So, scratch the eggs and serve them to your plecos. They won’t refuse what you put on a platter.

Much isn’t known about whether these industrious scavengers love snail eggs or not. But even if your cory fish aren’t particularly fond of eating snails, their scavenging routine can still damage the eggs in the process.

If you have a large community tank, at least a 55-gallon tank, these sharks will help you limit the snail population to a degree.

But having said that, I personally don’t think they should be your go-to solution if there’s snail infestation. Also, these sharks grow at an astounding rate, and eventually, you will have to get a bigger tank.

Although this is a fish list, assassin snails are still effective snail exterminators, making them worthy of being on this list.

But there’s a limit on how much one assassin snail can devour in one day. So, do not think that having a few will completely decimate the snail problem.

Snail Keepers Testimonials On Getting Rid Of Snail Eggs

“I wouldn’t get a fish just to eat snail eggs. Primarily because you may not end up liking the type of fish or if they aren’t doing a good enough job, you pretty much just wasted money and tank space for other fish that you might enjoy more.

“Getting fish just to remove snail eggs is a big no. Even the smallest fish would attack bigger snails.

“If my populations of small snails are getting out of hand, I do the old pick and squish method. The fish enjoy the treat. Also, if you notice they are overpopulating, raise your gravel vacs and decrease your feeding. They can only reproduce readily with a food source (unhealthy plants or too much fish food). I enjoy all the snails I have and don’t see them as pests at all.”

Why Are Nerite Snail Eggs Hard For Fish To Eat?

Nerite snails don’t lay eggs in clutches as other snails do. Instead, their eggs are dispersed over the tank – stuck on driftwoods, plants, glasses, and decors. This makes scraping a challenging task for bigger fish. So, only fish smaller than 2 inches can feed on them.

Alternative Ways To Get Rid Of Snail Eggs

I’d like to remind you that getting fish isn’t the best method to get rid of snail eggs. They only help you maintain the snail population by feeding on snails. And in a worst-case scenario, some fish might annihilate the whole snail population.

So, here are some other ways you can get rid of snail eggs:

Yes, this might be a cumbersome task, but you should do it if you really want to get rid of those pesky eggs. You can use a plastic spoon or spatula and scrape them off without tampering with the tank settings.

It is an established fact that snails do not thrive in crystal clear water. So, if you perform water changes every week, you will automatically get hold of their population.

Remove What Houses Them

Snails usually lay their eggs glued to driftwoods, plants (both fake and real), and decors.

Though you can’t do anything about the eggs laid on real plants, I recommend you take the rest of the decors outside and lay them under the sun. The heat will draw the moisture from the clutches and make them infertile.

Although this technique will not help you get rid of the eggs, this can dramatically reduce the snail population. Take a large cucumber, put it in the tank, and leave it overnight.

The snails love cucumbers, and you will find them all over it. Remove the cucumber along with snails the next day.

Honestly, I don’t think keeping fish for the sake of removing snails is a good idea. Unfortunately, I have yet to meet hobbyists who agree with this technique until today.

So, I advise you to remove them manually.