What Glofish Can Live Together? 2022 Compatibility Guide 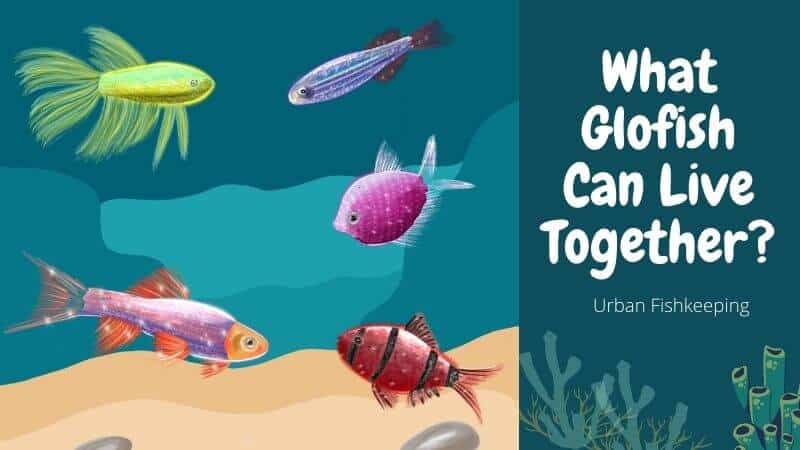 There’s no one single answer to “what glofish can live together?”. That’s because there are 5 different glofish species, and each comes with a unique persona. Except for the bright disposition, they’re very much different from each other in terms of appearance, behaviors, and needs.

In this blog, I’ll tell you what glofish can live together in the simplest way possible.

So, let’s start without further ado!

What Glofish Can Live With Each Other?

And lastly, glofish danios, barbs, and tetras can all live with each other provided that you house at least 6 from each species.

Can Glofish Bettas And Glofish Tetras Live Together?

Glofish bettas and tetras have pretty much similar needs when it comes to temperature and pH.

But if you really insist on keeping glofish tetras and bettas together, you need to ensure that there are at least 6 tetras in the tank. This way, they’ll mostly keep to themselves and will not pester your betta.

Another silver lining is the fact that bettas usually lounge at the surface. And tetras swim in the middle region. So, confrontations are rare, although we can’t entirely rule them out.

Can Glofish Bettas And Glofish Danios Live Together?

But unfortunately, danios are known to nip at long-finned tankmates, too. Therefore, there are some risks involved in keeping them together.

Can Glofish Bettas And Glofish Barbs Live Together?

Sadly, glofish bettas and barbs don’t make suitable tankmates. They shouldn’t be housed under the same roof. But if possible, what a majestic sight it would be!

Both species are known for their acute aggression. And in a confined system like an aquarium, they will inevitably fight for space.

And most likely, glofish barbs ( assuming they live in groups of at least 6 as they should) will gang up on your betta, chase it, push it around, and nip at its beautiful fins.

This can very well lead to infections and fatal diseases if not treated on time.

Can Glofish Bettas And Glofish Sharks Live Together?

No, hell will freeze over before glofish bettas and sharks become compatible with living with each other. Parameter-wise, both species are consistent – they have the same pH and temperature needs.

But there’s one more thing in common – their incredible intolerance for another being in their territory.

A hobbyist on a forum reported that he keeps rainbow shark and betta in a heavily-planted 90-gallon tank. Apparently, the obnoxious shark constantly chases the betta around.

I guess it’s only a matter of time before the betta dies untimely due to stress.

Another hobbyist commented that a male betta will basically be a live toy for a glofish shark.

Can Glofish Tetras And Glofish Danios Live Together?

Good news, finally! Yes, glofish tetras and glofish danios can live together. From size to dietary requirements, they have so many things in common.

For starters, both danios and tetras require the same water parameters, including temperature, hardness, and pH.

Second, they are both social and non-aggressive for the most part.

But keep in mind that you should at least keep 6 of them each together in the tank. That’s because they are schooling fish that find comfort and safety in numbers.

If a certain species outnumbers the others – for example, let’s assume there are 6 glofish tetras and 2 glofish danios – the danios will become quite seriously stressed, which will then negatively impact their health.

And under unfavorable circumstances, both these species are known to chase nip at their tankmates.

Can Glofish Tetras And Glofish Barbs Live Together?

Both glofish tetras and glofish barbs are schooling/shoaling fish. They are also tropical fish that pretty much have the exact environmental and dietary needs.

There’s just one significant difference. One party is more aggressive than the other. And no points for guessing – yes, it’s glofish barbs: the genetically modified tiger barbs.

I scoured through a couple of forums, and it turns out that keeping glofish barbs and tetras together is either a hit or miss.

Both these species are fin-nippers. But since glofish barbs have a more aggressive temperament than tetras, they have the upper hand at bullying.

So, although the match isn’t made in heaven, you can try keeping glofish barbs and tetras together in the same enclosure, provided that the tank is big enough to house at 6 barbs and 6 tetras comfortably.

Can Glofish Tetras And Glofish Sharks Live Together?

Glofish sharks are the most aggressive and dangerous species in the glofish family. But guess what? They can perfectly live together with glofish tetras.

Turns out that glofish sharks get along with short-finned, mid-water-dwelling, schooling fish like tetras as long as they don’t encroach the shark’s territory.

A glofish shark will choose a territory – a rock, a cave, or a corner- it can hide in. it will then actively defend it from potential and perceived intruders at any cost.

They will act savagely against similarly-shaped fish like other sharks and algae eaters. However, from what hobbyists reported, they’ll simply chase the tetras away.

And sooner or later, the glofish tetras will learn not to keep their distance from the shark.

Can Glofish Danios And Glofish Barbs Live Together?

Yes, glofish danios and glofish barbs can peacefully live together. Glofish danios are fast and agile, making them perfect for hyperactive barbs.

They’re pretty amicable but still able to hold their own when kept against semi-aggressive glofish barbs.

But we still can’t rule out some possibilities of aggression and duels.

Both these fish are tropical species that thrive in a similar kind of environment. They’re also both omnivores that love snacking on the same food.

That’s not all! Both glofish danios and barbs are schooling fish.

Much like the original species, glofish danios are very friendly fish that will pretty much get along with any other fish.

Barbs tend to be the bullies, but as long as you keep a good number of them in the tank, they’ll keep to themselves and leave the danios alone.

Can Glofish Danios And Glofish Sharks Live Together?

Just make sure you keep at least half a dozen glofish danios.

Slender glofish danios have just the right temperament to be kept with glofish sharks. They are very peaceful and will avoid confrontations and duels as much as possible.

And they’re just the right size for rainbow sharks to not confuse them for food.

Lastly, since glofish danios live in the top and middle portion of the tank, they rarely meddle with bottom-dwelling rainbow sharks.

So, it’s a yes – a big fat yes. Glofish danios and glofish sharks can live together.

They won’t necessarily appreciate but tolerate each other’s presence!

Can Glofish Barb And Glofish Sharks Live Together?

It can be dicey, but glofish barbs and glofish sharks often make good companions. Barbs are active, playful, and challenging fish that can hold their own against the aggressive rainbow shark.

However, you need to keep at least 6 glofish barbs together as they’re other schooling fish.

Otherwise, the tables will turn, and the barbs will nip at the fins of the shark. And in return, they’ll have to face the shark’s wrath.

I scoured through a couple of forums and found that many people have successfully kept glofish sharks and glofish barbs together.

Turns out the glofish shark will chase the barbs every once in a while if its territory is encroached, but that’s the worst that’ll happen.

Just ensure the tank is big and plenty of hiding spots are made out of plants, rocks, and caves.

Final Words: What Glofish Can Live Together?

First and foremost, glofish sharks and glofish bettas are solitary fish. They really enjoy their own company and definitely don’t feel alone. Therefore, it’s best that you house them alone.

However, if you insist on adding some more glofish to their tank, it’s possible to do so in a glofish shark’s home.

As notorious as glofish sharks are for their anger problem, they’re surprisingly tolerant towards petite, short-finned, mid-water-dwelling glofish species like glofish barbs, danios, and tetras,

But make sure you don’t add these 3 alongside bettas. They will take turns nipping at your poor betta’s fin and making its life miserable.

Lastly, you can house a school each of glofish danios, barbs, and tetras in the same tank provided there’s enough space for everyone.