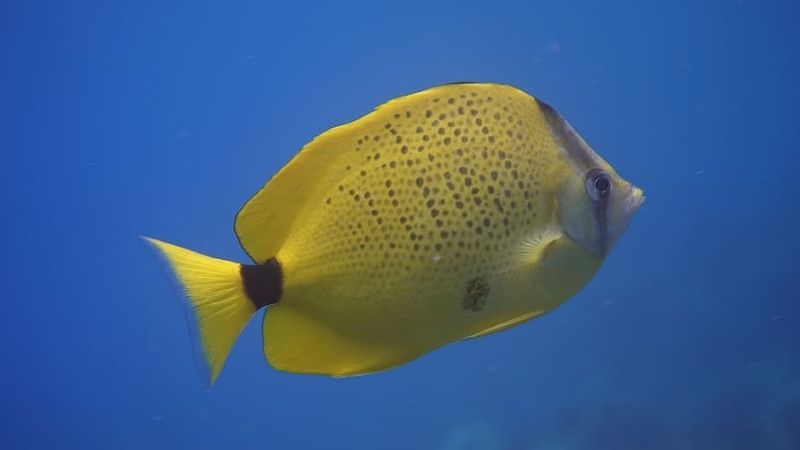 While giving saltwater baths to freshwater fish and vice-versa is acceptable to annihilate certain parasites, exposing them to the wrong salinity level for long can lead to grim consequences.

This blog will discuss what happens if a saltwater fish is placed in freshwater. We will also touch on the result of exposing freshwater fish to saltwater.

So, without any further ado, let’s begin!

What Happens If A Saltwater Fish Is Placed In Freshwater?

Saltwater fish cannot live in freshwater. Since there’s already a higher concentration of salt in their bodies, freshwater would enter their bodies through osmosis, causing the fish’s cells to swell and explode, leading to death.

On the other hand, freshwater fish cannot survive in saltwater conditions either. Saltwater is, well, just too salty for them. The water contained inside their bodies will flow out of their cells, and the fish would become shriveled and die of dehydration.

Unfortunately, a quick Google search told me that the internet is littered with misinformation on how to acclimate saltwater fish to freshwater conditions and vice-versa.

Let me get this straight – there’s no trick you can pull or no scientific experiment that will help you do so.

It doesn’t matter how long you acclimate the fish or how many generations you raise; their kidneys and gills are simply not evolved enough to endure or thrive at the wrong salinity levels.

And by the way, they won’t – at least for the next couple of thousand years.

The saltwater aquarium hobby is costly. It’s also quite tricky to maintain it.

Therefore, if you’re a beginner looking to raise a bunch of beautiful, colorful fish, you can begin with freshwater rift valley systems like Lake Tanganyika and Lake Malawi tanks.

These cichlids come in all sorts of vibrant colors and patterns. When it comes to appearance, they can easily give saltwater fish a run for their money.

And by the way, this article here features some cool freshwater doppelgangers for clownfish. So don’t forget to check it out!

The explanation might get lengthy, but I’ll try to keep it as eloquent as possible and hopefully don’t use a lot of jargon.

A semipermeable membrane, like a thin film inside the egg, is a barrier with holes big enough to allow the liquid molecules to enter but small enough to block the flow of sugar, salt, or other concentrated content.

Now, the cell membrane is semipermeable. It blocks larger molecules from passing but allows water molecules to pass through.

Let’s take a raisin, for example.

When you submerge a raisin in freshwater, the fruit will swell up. That’s because raisin naturally has a higher sugar concentration than freshwater. So, the water will keep flowing in – causing the raisin to swell.

What Do You Mean By Osmotic Pressure?

As you can tell by now, the osmosis process can be pretty harmful, in fact life-threatening, for fish. And that’s where osmotic pressure comes into play.

Osmotic pressure is applied to counteract water molecule flow across the semipermeable membrane.

The osmotic pressure increases as the water transfers across a semipermeable membrane to a higher concentrated solution.

So, if the solution concentration is equal on both sides of the membrane, the need for water to move across ceases. Thus, no osmotic pressure takes place.

The primary reason saltwater fish cannot survive in saltwater, and vice-versa has a lot to do with a liquid’s property called tonicity.

Tonicity refers to the measure of osmotic pressure. Broadly, there are three classifications of tonicity that we need to understand why fish only survive in certain water bodies.

Hypertonicity is characterized by a higher content concentration outside the cell than inside it. And this results in cell shrinking since water flows out of the cell to dilute the content outside.

On the other hand, hypotonicity is caused when there’s a higher content concentration inside the cell, causing the cells to bloat and burst since water keeps flowing in to dilute the cell’s solution.

Lastly, isotonicity refers to the balance of solute concentration inside and outside the cell. There’s no change in cell volume or movement of water between the membrane in this context.

What Do Saltwater Fish Eat? Should You Give Them Flakes?

Thanks to osmosis, fish need to osmoregulate, which means they have to maintain the right amount of water in their bodies at all times.

So, seawater is hypertonic to the fish living in it. This means the salt concentration is higher in the water than inside the fish.

The water is continually being sucked out of their bodies.

Therefore, to survive this, saltwater fishes continually drink plenty of water all the time to compensate for water loss caused by osmosis.

And they filter out the excess salt from their bloodstream through the gills and kidneys by urinating.

Thus, water continuously flows into their body through the gills, skin, and mouth due to osmosis. So, to balance the amount of water in their bodies, they have to constantly urinate.

All fish osmoregulate using their kidneys, gills, and intestines. These organs play pivotal roles in either excreting or absorbing water and/or ions.

Before we end this blog, let’s look at some frequently asked questions surrounding the topic.

How Long Can A Saltwater Fish Live In Freshwater?

Unfortunately, there’s no concrete answer to this question. It differs from fish to fish. However, I’d say they can survive for anywhere between 30 seconds to 10 minutes, which is also the recommended time range for medicational dips.

But apparently, bull sharks often travel to rivers in Amazon and Mississippi, where the water salinity is as low as 2.1%.

Do Saltwater Fish In Freshwater Explode?

When a saltwater fish is exposed to freshwater conditions, its cells will swell up and explode – causing the fish’s death. But this tragic injury happens inside the body – we can’t really observe it.

So, no – saltwater fish cannot don’t explode in freshwater per se, but their cells do.

Are Freshwater Fish Hypotonic Or Hypertonic?

Freshwater fish are hypertonic to freshwater. Thus, water flows into their body continuously via osmosis. And to compensate for this overhydration, freshwater fish have to pee constantly.

So, that makes freshwater fish hypotonic to saltwater. The water from their body will flow out via osmosis. Thus, they will get all shriveled up and die.

According to National Biological Information Infrastructure (NBII), freshwater fish cannot survive if the salinity levels of the water increase by more than 0.5%.

How Do Fish Survive In Saltwater?

The saltwater of seas and oceans is hypertonic to the fish living there. Therefore, water is continually sucked out of their system.

And to compensate for this water loss due to osmosis, saltwater fish continuously drink water all the time.

What Are Fish That Live In Both Saltwater And Freshwater?

Fish that can survive in both saltwater and freshwater are known as euryhaline fish. They can be further divided into anadromous and catadromous fish.

Anadromous fish are born in freshwater, who then travel to saltwater to spend the rest of their lives. However, they will come back to freshwater to lay their eggs.

Some examples of anadromous fish include salmon, smelt, striped bass, and sturgeon.

On the other hand, catadromous fish live in freshwater all their lives but enter the sea through rivers to lay eggs. Examples would be European eels and North American eels.

But even when migrating, all euryhaline fish need to go through a certain acclimation period.

To answer what happens if a saltwater fish is placed in freshwater, you first need to understand certain concepts like osmosis, hypertonicity, and hypotonicity.

I’ve explained all of them above in simple words with clear examples.

But in short, what happens is that freshwater flows inside the cells of the saltwater fish, causing the cells to swell and finally explode. And naturally, this causes the fish’s death.

Mold In Fish Tank? 10-Step Plan To Remove It.

What Do Fish Eggs Look Like In A Tank? Adorable Pictures!