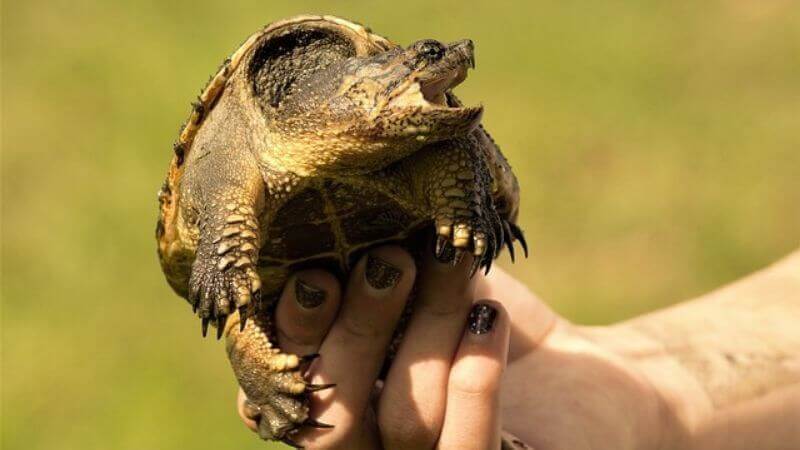 Turtle bites can be painful. If you have had turtles for a while, you have probably been bitten at some point. Or, if you haven’t, it’s only a matter of time.

But does their bite hurt that bad? Are they poisonous, and what should you do if a turtle bites you? These are the questions that arise when a person gets bit by their pet turtle. So, without further ado, let’s dive in.

What Happens If A Turtle Bites You?

Different turtles have different biting forces. For example, bites from snapping turtles can be painful, whereas bites from box turtles will only cause mild pain. Turtle bites aren’t poisonous, but they can still cause wounds and infection.

So, you need to wash the wound and treat it with antiseptic immediately. In case of serious injuries, such as profuse bleeding, call 911 and seek medical attention right away.

Turtles do not have teeth. But their jaw force can inflict pain. I have been bitten by my RES, and he kept biting until I put him back in the water. So, I know how it feels like to be bitten by an aggressive turtle.

You shouldn’t try to pull the turtle away when it bites you. This can result in skin lesions and damage your skin. Pulling it will only scare the turtle more, and it will bite even fiercely.

What To Do If A Turtle Bites You?

Wash the bitten area with soap and lukewarm water. Next, run the wound through running water. This will subside the pain. Next, Use antibiotic ointment like Polysporin or Neosporin over the wound.

Here are the possible scenarios after a turtle bite and how to act during such conditions:

There Is Profuse Bleeding

If the bite is too severe, you need to treat it immediately. In case of profuse bleeding, use a clean cloth or bandage, and put pressure on the wound. If the bleeding doesn’t stop after 10 minutes, call 911 and seek immediate medical attention.

Sometimes, bites from turtles like snapping turtles can rupture blood vessels in the bitten spot. This will cause the blood to spurt. Use a cloth immediately to press upon the wound tightly. This will stop further blood loss and prevent the victim from being unconscious.

However, rupturing of blood vessels seldom occurs from a turtle bite.

After a turtle bite, the victim can feel extreme pain on the spot even after days despite not bleeding. This can be a sign of fracturing of bone on the spot.

The metacarpals are lighter and have less bone density, and can break if the bite is fierce. This usually happens during handling or feeding.

First, clean the spot with running water. Stop the bleeding with a clean cloth or bandage. Dress the wound. If there is no sign of tearing the skin, put an ice pack over the spot to numb the pain. Seek medical attention and conduct X-rays if prescribed by the physician.

There Is Only Single Bite With A Shallow Wound

This type of bite can be treated by using a simple first aid kit.

> Wash your hands before cleaning the wound. This is to prevent foreign transmission of bacteria over the fresh wound.

> Clean the wound with lukewarm water. It will be better if you put the bitten area under running water.

> Get a betadine solution and use a cotton pad to apply it over the wound and areas nearby. Do not worry if you feel a burning sensation while applying betadine solution. It is a sign that the solution is working to prevent infection.

> Get a dressing pad from the kit and dress the wound.

> Clean and change the dressing daily. It will prevent infection and prevent escalation of infection if there’s any. You will also be able to check whether the treatment is working or not.

Why Do Turtles Bite?

Turtles Bite When They Are Scared

Turtles get scared quickly. It mostly happens when they are on land. They are not in their element, water – thus, they feel vulnerable and will attack anyone who tries to handle them.

External disturbances such as loud noise, too much footfall, pets nearby, etc., can also make them scared.

Relocation to a new place can also stress them, which is one of the reasons behind biting. So, you need to let them acclimate to the new surroundings and help them be calm.

Turtles Bite When They Are Hungry

Baby and juvenile turtles have a large appetite compared to adults. They get too excited at the sight of food and will try to snatch them from your hands. They will be relentless in not leaving their mouth even after biting your hands.

Pulling the turtles will only hurt your skin. So, bear the pain for a moment, and put your hand inside the tank. The turtle will have to let go of their bite to swallow the food they have inside their mouth.

Turtles Bite When They Are Stressed

Turtles can get stressed for lots of reasons. They can get aggressive during mating season and will try to bite you. Introducing them to a new environment can also account for the stress.

Try to know what is causing your turtles to stress so much that it is resorting to biting you. Such turtles will show signs like hissing, panting, and retracting too often.

Check water parameters, tank size, and compatibility with other tank mates. This will give you an idea of why your turtle is stressed.

Turtle Bites Can Be A Mating Ritual

Many pet owners claim that their turtle is headbutting their other pets, like cats and dogs. They also attempt to bite them. Most mistake these signs for territorial disputes among pets. Peculiar it may sound, but the experts believe these are the signs of a mating ritual for turtles.

Most turtle owners only keep a single turtle, which berefts them from having a mating partner to copulate with. This is why they will display activities like biting and headbutting any living thing in their vicinity.

Turtles Bite When They Are Handled Roughly

Despite not being too expressive, turtles know when someone’s being gentle or harsh during handling. A soft and delicate touch can be considered receptive, whereas rough handling often results in getting bitten.

Here’s how you handle a turtle the right way:

Always use both hands to pick up your turtle. And, make sure your hands are in the center of the carapace and towards the back region. This way, you will not get bitten as the turtle’s mouth will not reach your hands to bite.

However, you shouldn’t go overboard by catching it from the tail region. This will hurt your turtle and frighten it.

Also, do not pick a turtle from the carapace (top shell) only. Instead, all your fingers except your thumb should be placed on the plastron (bottom shell).

You shouldn’t move your hands too much or too often while carrying a turtle. Be gentle because sudden movements can add more stress to these timid reptiles.

Can Turtles Bite Your Fingers Off?

Most turtle bites only leave marks, or in severe cases, wounds. But, there are turtles with a powerful biting force that can bite your fingers off. For example, common snapping turtles have a bite force of over 200 newtons of force.

There are documented cases of common snapping turtles biting a human’s finger off. So, you need to be extra careful while handling a snapping turtle.

However, if you think snapping turtle’s bites are the strongest, you are mistaken. The toad-headed turtle can exert double the amount of bite force than a snapping turtle. So, you can only imagine how hurtful it will be to get bitten by this turtle.

Here’s an interesting video that shows the host being bitten by an alligator snapping turtle:

Find out how it feels when a box turtle bites you. And if you’re curious about how a red-eared slider’s bite feels, head over here!

How To Prevent Yourself From Getting Bitten By A Turtle?

Here’s how you can avoid getting bitten by a turtle:

Do Turtles Have Teeth?

To date, there are about 356 turtle species, and none of them have teeth. Some have sharp beaks, and some have lips. It all depends upon the species.

You can know more about this in my article: Do turtles have teeth?

They top the list for the strongest bite among turtles. They can bite with a force of over 430 newtons. This is twice the amount of force a snapping turtle can exert.

Alligator snapping turtles have a bite force of 150 newtons. This is less compared to the above two, but they still inflict enough harm. So, be careful while handling them.

Final Words On What Happens If A Turtle Bites You

Different turtle species have different bite forces. Some can feel like a sting, whereas some can leave your fingers fractured. So, knowing their mood to predict aggression and agitation is crucial.

Turtles often bite when they are stressed. They show signs like hissing, biting, frantic swimming, etc. You need to identify the stressors that are making the turtle display such behaviors.

They also bite when the handler isn’t gentle and adept with carrying. Use both hands, and carry it from the bottom region of its body. Place your thumb over the carapace and the rest of the fingers on the plastron.

Don’t ever skip washing hands after handling a turtle.

If bitten by a turtle, you need to check how serious of a bite it is. Typically, turtle bites can be treated using a simple first aid kit at home. However, if the bleeding doesn’t stop, call 911 and seek medical attention right away.