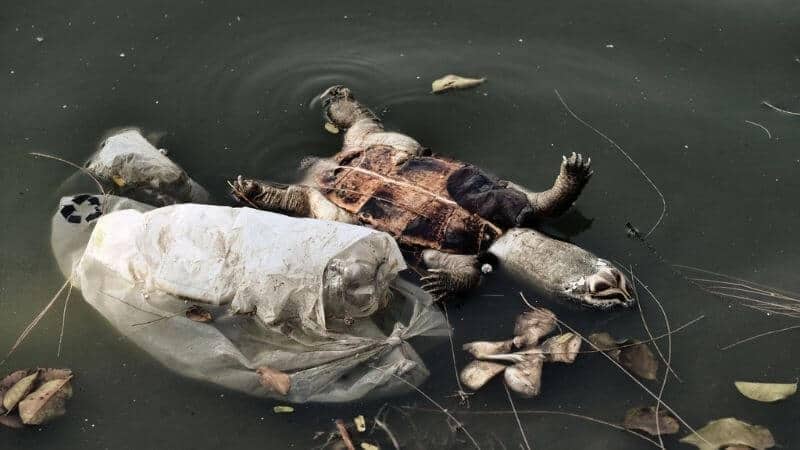 Most pet turtles like terrapins and box turtles live up to 30-40 years, spanning at least two generations in a family. A pet’s death is always painful, but even more when you’ve had it for such a long time. Thus, it’s entirely normal for someone to wonder what happens to turtles when they die.

What Happens To Turtles When They Die? Like all living beings, turtles start decomposing once they die. Now, how long do turtles take to decompose is a relative question that depends on your area’s climate and your turtle’s species. However, in general, turtles float to the surface as quickly as 16-32 hours and promptly decompose after that.

As the flesh starts decomposing, it produces characteristic gases like indole, skatole, and putrescine. This happens because the microbes break down the carbohydrates, protein, and fatty acids in the body.

In addition to producing a foul smell, these gases also increase buoyancy—making your turtle’s dead body float on water.

How Long Do Turtle Shells Take To Decompose?

On average, a turtle’s shell takes about 50 years to eventually decompose. Roughly, that’s the same period taken by human bones to decay. Turtle shells have a far more different anatomy and composition than the rest of the body.

These shells are made up of around 60 bones covered by soft and hard plates known as scutes. And they don’t decompose easily.

However, before we jump to conclusions and talk about preserving the shell, let’s figure out how you can tell a dead turtle from living.

What Are The Symptoms Of A Dying Turtle?

Here are a few signs of a dying turtle:

However, note that these signs are very much common in brumating turtles as well since their immune and digestive systems temporarily stop working.

Most pet turtles hibernate for about 2-4 months at once. This is known as the brumation period, where turtles remain inactive and do not eat.

In the United States, this happens between October-November until February-April.

So, don’t confuse a hibernating turtle with a dead one.

How To Know If A Turtle Is Brumating Or Dead?

Here are a few things you can do to check if your turtle is simply brumating or is dead.

Gently move the leg away from the body. When you do so, the turtle would typically react by retracting further into the shell.

If you don’t get any reaction from moving the leg, check the turtle’s pulse. Look for pulse or breathing movements in the skin between the tail and legs or head and legs. If you don’t feel anything, warm your turtle for around 20 minutes and try again.

If you can’t get any physical sign from your turtle, place it in a room-temperature soaking bath. Make sure the water isn’t too warm so that it doesn’t shock her.

If it’s merely brumating, the gradual warmth from the bath will stimulate detectable life signs. That may trigger urinating, defecating, or other bodily functions.

The three reasons mentioned above are easy ways to ascertain at home, but they’re not foolproof. If you’re in doubt, always contact the vet so that he can assess whether the turtle has died or is dehydrated and weak.

How to Bury a Turtle? A Proper Ritual

What Are the Stages Of Decomposition Of A Dead Turtle?

Altogether, there are five stages to it:

The decomposition is a lengthy process that happens over a few weeks. And the process and stages are quite similar to hard-shelled reptiles.

The fresh dead stage commences when the heart stops beating. This is characterized by stiff limbs and little to no foul smell.

The turtle’s body temperature will either lower or rise—corresponding with the room’s temperature.

The bloat dead stage starts once the body produces a foul smell. At this point, the flesh will have start decomposing as well—hence, the bad smell.

At this point, the corpse will start bloating, and skin and scales start peeling too.

Depending on the climate and environment, the active decay stage may take several days or a few weeks to start. At this point, the bloated cadaver starts withering. It will be accompanied by critters, maggots, and insects who’ll fuel the decomposition process.

At the end of this stage, the remaining skin becomes leathery. The internal organs are eaten up, and the skeleton starts showing.

At this point, there’ll be nothing left for insects and maggots to feed on. Based on your region’s climate, this stage can last several months to a couple of years.

In the end, only the bones and scutes remain, which is known as the dry stage.

How To Preserve Shell Of A Dead Turtle?

It’s a common practice among turtle keepers to preserve the shell and keep it for memory’s sake. Two processes of removing the shell are 1) decomposition and shell removal and 2) Instant Shell Removing

A shell can last for over 50 years, making it an excellent keepsake or even a family heirloom.

The first step to this process is practicing patience.

The decomposition process can take months before the innards disintegrate, and the smell has subsided. Make sure to check once every few weeks.

Once the shell is standalone, wear your gloves and clean the inside wall. The preserved bones will remain inside the shell, so it’s up to you to keep them or remove them. If you want to remove it, use a handle of a toothbrush to clean all the nooks and crannies.

Scrub the shell with hot water and a toothbrush. Gently scrub both walls and make sure it’s all clean.

If patience is not your best virtue, there’s another method you can try. This technique will take the strength of both the mind and the stomach. So be 100% sure if you want to do this.

The process here includes simmering the dead body shortly after the turtle has died.

It will produce a pungent smell quite strongly. Make sure that the room is well-ventilated.

After continuous boiling, the soft tissues will drop off. Then, you can follow the same cleaning method, as we stated above.

Does A Dead Turtle Move?

With slow-moving and docile creatures like a turtle, it’ll be weeks before you know it’s dead in most cases—let alone catching it in motion after dying. However, there are instances where turtle keepers have reported witnessing their dead turtle move, similar to a dead snake.

The possible reason behind this could be that in cold-blooded creatures, the slow metabolism sustains the internal organs for a bit longer than warm-blooded animals—causing them to die slowly. This could be the reason some owners see faint movements even after the turtle has died.

How Do Safely Dispose A Dead Turtle?

It’s never easy to say goodbye to a reptilian friend. The process of disposing of the body can be even more painful.

Here we have listed three ways you can dispose of your dead turtle.

Bury In The Backyard

This is the most heartwarming and common way of disposing of the body. You can make a pet cemetery and even add plants and give it a personal touch.

Take It To A Vet Clinic Or Animal Control

Not all regions allow the practice of burying the pet in the backyard. In that case, you can either take the dead body to a vet’s or animal control. Both parties offer the option of burying the body on your behalf.

Give It To A Taxidermist

A lesser-explored but great option is to donate the body to a taxidermist, who can add lifelike effects and preserve your turtle’s body for years to come.

Is it Bad Omen If A Turtle Dies?

In many cultures across the world, turtles are known to bring good luck and wealth. So, naturally, a turtle’s death is linked with a bad omen. It’s believed to be god’s way to tell that something terrible is going to happen.

However, these are all superstitions with nothing to back them up. If you’ve recently lost a turtle, don’t spend your time worrying about the incoming bad luck—instead, cherish and honor the time you spent with your beloved pet.

Final Words: What Happens To Turtles When They Die?

The answer to what happens to turtles when they die is far more complex and lengthy than it’d be other creatures.

Naturally, the body decomposes, but several processes can take years before the body completely mixes in the soil. The flesh, internal organs, and innards decay in at least 5 stages, spanning from several weeks to a few years. On the other hand, the bones and shells take almost 50 years—the same as the human bone!