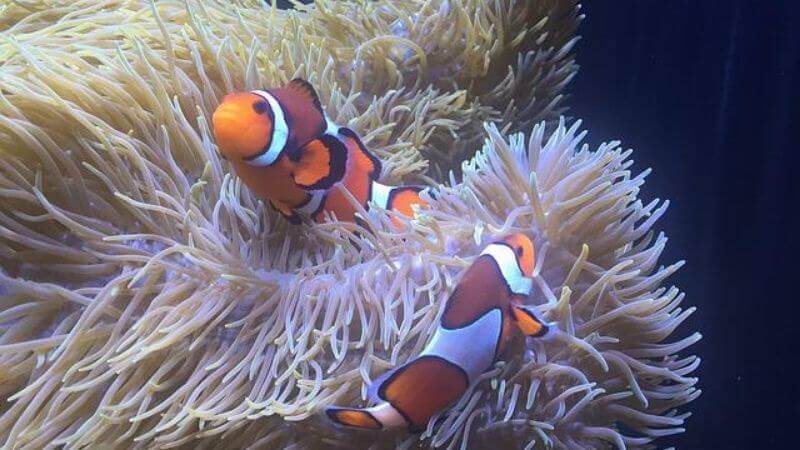 Following Coral’s death, Marlin and Nemo’s lives turn upside down. But the film’s ending is heartwarming and almost tear-jerking when the little boy finally reunites with his father.

So, would you believe me if I said Marlin should have turned into a female (Marlyn, maybe!) by the time the duo gets back together? What happens when a female clownfish dies?

Clownfish may be the poster child of the saltwater aquarium hobby, but they’re widely misunderstood. Even with a blockbuster motion picture under their belts, little is known about their biological and social relationships.

If Finding Nemo was to depict what really happens beneath the big blue blanket, the plotline would hardly qualify for a Disney film.

In this article, we’ll uncover the truth. We’ll go deep and investigate how the story should have really unfolded.

What Happens When A Female Clownfish Dies?

When a female clownfish dies, the breeding male (now the biggest fish in the school) will turn into a female. The fish will experience biological and psychological changes over several weeks to become a female.

She will then mate with the current biggest male and produce hundreds of offspring.

By the way, this is a one-time change. Once the clownfish becomes a female, it cannot switch back and become a male again.

Either way, that’s mind-boggling, I know! It can be hard to fathom if you’re reading about this for the first time. But it turns out it’s not uncommon at all.

However, note that not all marine sequential hermaphrodites start out as males. For example, moon wrasses and Asian sheepshead wrasses start out as females and then become males later on when the situation is favorable.

So, let’s skim through that first!

Clownfish don’t live or swim in huge groups. A school of clownfish is made up of 6 to 7 members at max. There’s always only 1 female who is the unanimous boss of the group, 1 breeding male, and a few non-breeding, sexually immature males.

Clownfish live in such small groups because an anemone cannot host any more fish than that.

For those of you who don’t know, clownfish share a unique interspecies friendship, also known as a symbiotic relationship, with anemones.

A clownfish provides anemones with food and nourishment, whereas anemones offer protection against predators.

All clownfish have to perform an elaborate dance with the respective anemone before taking up residence. Then, the fish will gently touch the anemone’s stinging tentacles with various parts of their bodies until they are acclimated to their host.

Now, group members adhere pretty strictly to the size-based hierarchy. For example, a recent study showed an average difference of 10 mm between the fishes’ sizes as the pecking order descends.

The breeding male will become the new female when the reigning female dies. And everyone else will move one step up in the rank.

Why Can Clownfish Change Gender?

Clownfish have evolved to change gender because of the extreme danger and risks they face in their day-to-day lives. Clownfish are small. They are also brightly colored and have a gawky swimming style.

If it wasn’t for their symbiotic relationship with anemones, they would have become easy meals for just about any big fish.

Therefore, the presence of constant threat in the ecosystem meant that clownfish seldom leave and stray from their host. So, if a female partner dies, it would be tremendously difficult for another female to come into the group or for the male to swim around and look for a partner. The stakes are very high.

Therefore, clownfish have evolved to change sex from male to female to ensure they don’t have to wander into uncharted waters looking for a mate.

How Do Clownfish Change Gender?

Clownfish hatch with both male and female reproductive organs. However, when the favorable time arises for the breeder male to turn into a female, the biological change is dictated by hormonal change.

Research has found that the sex change first happens in the fish’s brain and only later involves the alterations of the gonads.

When you pair two males in the same tank, they will fight until one emerges as a clear victor.

And the first thing that changes is the victor’s brain, particularly the region of the brain that controls the gonads.

In an experiment, when one of the two emerged victoriously, the winner began to behave like a female within a few hours.

Physically, the most obvious change happens in the set of genes involved in the expression of gonadotropin-releasing hormones (GnRH)

that regulates the gonad’s function in fish.

Gradually, the testes will dissolve, and ovaries will form.

How Should Finding Nemo Have Ended?

In the film Finding Nemo, Nemo soon gets lost and captured after his mom and siblings die. His father, Marlin, then moves heaven and earth – dodging sharks and swimming through jellybean forests – to reach land down under and finally be reunited with his son.

However, if the film’s script was to follow what really happens among clownfish, the ending would have been entirely different.

First, Nemo wouldn’t have gotten lost in the ocean because clownfish don’t stray from their host anemone at any cost. They spend their entire lives swimming around and inside the anemones.

Second, Marlin should have turned into a female after Coral’s death since he is the breeding male and now the biggest fish in the school.

Third, Nemo should have turned into the breeding male because he is the only other fish present in the anemone.

So, Marlin (now a female) should have mated with Nemo (now a breeding male) and continue their lineage and legacy forward!

As misleading as it was, I am super thankful that Disney chose not to follow the original storyline and came up with an alternative!

But this is not the only thing the film got wrong about fish. The other two significant characters of the film were also portrayed in the wrong light.

Let me tell you why and how.

Coral and her eggs are devoured by a passing barracuda in the film. When poor Marlin tries to fight the giant fish, he gets knocked back into the anemone unconscious.

However, clownfish don’t really make up any part of a barracuda’s diet in real life. That’s because they inhabit different parts of the ocean. While clownfish live among coral reefs, barracudas prefer open and deep waters.

So, barracudas instead snack on a lot bigger and meatier prey like herrings, jacks, tunas, mullets, killifishes, grunts, groupers, and anchovies.

Here’s a link to our in-depth article that explores a barracuda’s interesting meal choices and ferocious hunting techniques.

We all adore Dory’s character from Finding Nemo. Despite her inability to remember things in the long term, the sidekick played a pivotal role in reuniting Marlin and Nemo.

Dory’s endearing personality soared the demand for blue tangs, on whom the character was based, so much that people were quick to jump on the bandwagon of recreating the iconic Nemo and Dory look in their home aquariums.

However, unfortunately, blue tangs don’t make great pets. As a matter of fact, they belong to a group of fish known as surgeonfish, who sting prey and predators with sharp spines present on their tails.

Plus, they grow pretty big for your regular saltwater aquarium. And the cost of upkeep can rise to $10,000 to raise a single blue tang.

And don’t even get me started on how they can infest the entire tank with marine ich and how raising these fish can be illegal in the first place!

If you want to read up on that, head over here.

What Happens When A Clownfish Mother Dies?

When the female clownfish dies, the breeding male, aka the father, will change his sex to turn into a female. His testes will get dissolved, and the ovaries will become prominent.

Once the male fish fully transitions into a female, it will breed with the second biggest fish in the group, who will unanimously become the breeding male.

Can A Female Clownfish Turn Into A Male?

Clownfish are sequential hermaphrodites. Therefore, they can’t change their gender both ways. All clownfish are born males, and the dominant one of the group becomes a female.

However, once it turns into a female, it can’t again switch back to becoming a male. The change is permanent and irreversible.

Do Clownfish Mate For Life?

Yes, clownfish form monogamous pairs. Once they pair up, they will stick with their partners until one of them dies. They don’t go around changing partners every spawning season.

The female will only breed with the biggest male of the group.

If you’re interested in knowing what happens next when either one dies, you wouldn’t want to miss this article.

What Is The Process Of Clownfish Mating?

Clownfish form monogamous pairs. The male fish has to put on quite a show to impress the female first. He will perform headstands and intricately show off his fins to woo the female.

The male is also assigned to find a suitable breeding spot. The tiles and the pots that you put in the aquarium come in handy at this time.

When the big day finally arrives, the female will make dozens of passes over the nest before depositing her eggs. Depending on the female’s health and size, she can lay anywhere from 100 to 1,000 eggs that are around 3-4 mm long in one spawning session.

The male is then tasked with egg-sitting. He will continuously fan the eggs and eat the non-viable ones, so they don’t infest good eggs with bacteria and fungus.

The female patrols the area, chase away potential threats and occasionally lends a hand to care for the eggs. The eggs then hatch in the next 6-7 days.

Most definitely. When a male becomes a female, his personality too changes from being an appeaser to the assertive one. The once submissive male who previously bore the brunt of the female’s anger becomes the aggressor and courts other smaller fish.

No, if you keep only one male fish in the tank, he most likely won’t change sex. Changing sex from male to female happens when you have a group of fish or a mated pair. The innate desire to reproduce is what triggers gender change – thus, a solitary fish doesn’t experience this change.

How Long Does It Take A Male Clownfish To Turn Into A Female?

The change in the brain happens within a span of a few hours. However, the biological change can take several weeks and even a few years.

When a female clownfish dies, the breeding male changes sex and becomes a female. This process happens over several days, weeks, or even months!

Testes get dissolved, and ovaries grow prominent! This biological change is guided by hormonal change.

Should You Get A Black Storm Clownfish? | Care Guide

Black Ice Clownfish Care Guide | Everything You Should Know