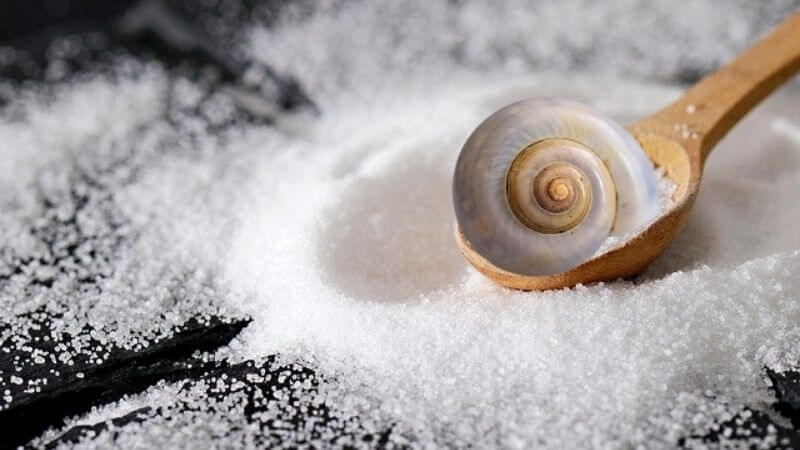 As a man of science, I love how salt is glorified in movies, especially the horror ones. The priest recites obscure passages from his Roman scripture. He then uses blessed salt to perform an exorcism. Ring a bell?

Not only in movies, but salt in real can also perform an exorcism by drawing out the soul (in this case, water) from most organisms. As a result, the plant or the being fades out of existence.

So, does salt have the same effect on snails, too? If yes, how does this occur?

Let me geek out.

Salt is natural kryptonite for snails. It will dehydrate the snail’s body and drain water from their skin through a process commonly known as the osmosis effect.

Like us, snails are highly dependent on water. This is why they seem to appear out of nowhere during monsoons.

Their over-reliance on the water is the reason behind their vulnerability against dehydrating elements, like sodium chloride, the salt.

However, the explanation behind a snail’s death by sprinkling salt runs much deeper than that.

Although there’s no doubt that osmosis due to salt exposure dehydrates a snail’s body, it does take time to react. But, when we sprinkle salt on a snail’s body, how come it melts instantly?

The Real Reason Behind Snail Melting When Exposed To Salt

There is an established internal balance in every cell between sodium (Na+) and chloride (Cl-) ions in every organism. Both these ions have a pre-eminent role in the workings of a snail’s system as well.

It may come as a surprise to you, but there are special pumps inside cell membranes to move the sodium and chloride ions in and out to maintain a stasis flow.

And when an excess amount of salt (NaCl) is dumped onto the snail, the balance of ions is immediately disrupted.

With overexposure to that much NaCl, the effectiveness of those unique pumps falter. So now, there’s a high influx of toxic concentrations in the snail’s cell.

To counter this toxicity, the snail’s body will involuntarily generate voluminous amounts of mucus to entrap the salt and get rid of it off its body.

But to produce mucus in significant volumes, the snail will use all the water contained in its body, resulting in rapid dehydration.

To add salt to its wound (pun intended), the ionic salt easily dissolves in the mucus and lengthens the effects.

Eventually, there will be no water left in its body, and the dehydrated snail will shrink and immediately die.

Should Salt Be Used As a Remedy For Controlling Snails?

Death by salt is one of the most inhumane ways to get rid of snails. I wonder if anybody has the stomach to see how these creatures suffer when they come in contact with salt. If it helps, there are other more humane methods of execution, like the beer method.

Remember that you should never use salt to get rid of snails while they are feeding off your plants and vegetables. Salt also has the same effect on plants, just like in snails. Trust me, you don’t want to try this.

Instead, several other alternatives help you get rid of these pest snails lounging in your backyard.

The smell of yeast in the beer lures snails. And as they drink to their fill, the ethanol in the beer puts them to sleep. If the snails have drank too much, they will die in their sleep. If it comforts you, dying while asleep is a lot less painful than being melted by salt.

To make this work:

Unlike other pest species, snails are easy to spot. If possible, handpicking snails every day is the most effective way to get rid of them.

Once you collect a slew of snails, put them in a bucket of soapy water or ammonia solution with a 10% concentration. This will kill them instantly.

Although I do not support this method, this is the only technique to help farmers protect their crops from snails.

Handpicking or the beer method will not be effective when getting rid of snails on a large scale because they are tedious (let’s be honest).

Do Snails Feel Pain If You Put Salt On Them?

Although no empirical findings have been established, snails do have neurons that they use for complex decision-making tasks. Just because they don’t have a spinal cord or a single brain doesn’t mean they cannot feel extreme discomfort or pain when sprinkled with salt.

We can easily sense the discomfort and pain when they come in contact with salt or copper. However, the jury is still out on this one.

Why Doesn’t Salt Affect Us Like It Does The Snails?

Well, our skin is much tougher than a snail’s. This is because our cell membranes are thick and a lot less permeable to be affected by merely coming in contact with salt.

Nevertheless, if you want to experience the excruciating pain, try sprinkling it over a fresh wound. Then only we could know what a snail has to go through when peppered with salt.

Salt has an instant reaction on a snail’s slimy body. It disrupts the balance of sodium and chloride ions in a snail’s cellular structure, which causes the snail to bubble, shrivel, and die due to dehydration.

Even if you have a snail infestation in your house, it is not a humane solution to use salt to get rid of them. Instead, you can try snail traps or handpick them yourself.