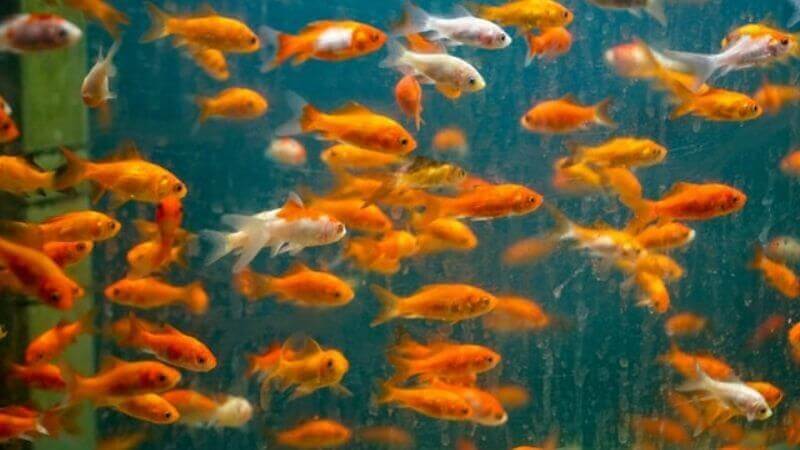 Goldfish have continued to fascinate us for over 2 millenniums. Yep, you read that right. Our favorite aquarium mainstays were domesticated nearly 2,000 years ago in ancient China. So, a lot has been said and known over the millennia about these fish. But what exactly is a group of goldfish called?

Turns out many of us have been using the wrong term up until now or don’t know the answer at all!

But not any more…let’s dive in!

What’s A Group Of Goldfish Called?

A group of goldfish is either called ‘troubling’ or a ‘glint.’ Since these fish don’t swim together in cohesion, saying ‘a school of goldfish’ would be wrong. But they’re known to shoal – therefore, saying a ‘shoal of goldfish’ wouldn’t be technically incorrect!

Anyway, troubling – what an interesting name, isn’t it? But, of course, glint is just as fascinating too!

When used in a sentence, you might say, “Look, what a beautiful troubling of goldfish,” where “troubling” is the collective noun that means group.

You could also say, “Oh, a glint of goldfish just passed by. What a sight to behold!”

A question popped in my mind when researching for this article. Do goldfish live and move in groups in the first place, like danios and barbs? Or they’re the kind to fight their own reflection like bettas?

Do Goldfish Prefer Living In Groups?

Yes, goldfish love living in groups! They are social creatures who love to live with their own kind! And that’s not all. Apparently, they can easily make friends with fish from other species in the community tank.

However, as social as goldfish are, they can also live and thrive alone. But it’s still recommended to at least keep them in pairs to encourage companionship and promote activity.

How Good Is A Goldfish’s Memory?

It wouldn’t be wrong to say goldfish are among the most misunderstood fish – thanks to the popular urban myth that they have a 3-second-long memory. But turns out that’s entirely false!

Reportedly, scientists have figured out that goldfish can remember things clearly for as long as 5 months!

In one experiment, scientists trained young goldfish by playing a particular sound during feeding. These fish were then released into the wild.

6 months later, the researchers played the same sound again over a loudspeaker, and most of the goldfish swam towards the direction of the sound.

So, you see – they definitely remember things for longer than 3 seconds!

A Goldfish’s Temperament – Are They Mean?

Goldfish are highly amicable, social, and hardy fish. That’s the reason behind their legendary popularity. Goldfish are peaceful fish that won’t pick up fights with anyone unless things get really heated.

They are known to pleasantly interact with other fish from the same species. And they’re immensely tolerable of different fish species in the community tank.

With the right care and attention, goldfish can easily be tamed.

Apparently, they’re also a lot smarter than what we give them credit for.

Researchers discovered that these fish can be trained to distinguish between Stravinsky and Bach’s classical music. I’m impressed!

Who Make The Best Tank Mates For Goldfish?

Since goldfish are non-aggressive, you can easily pair them with other fish that aren’t vastly different in size. These are gregarious fish, meaning they like to live in groups.

And don’t forget to take temperature into consideration as well. You should choose tank mates that are tolerant of cooler water.

You should also take swimming ability and foraging skills into account to ensure that all fish can access enough food and swimming space.

4 essential things that you must take into account. They are:

And based on those above 4 parameters, here’s our comprehensive list of suitable tankmates for goldfish:

What’s A Group Of Sharks Called?

Shiver! A group of sharks a shiver!

What’s A Group Of Whales Called?

The collective nouns for a group of whales are pod and gam.

What’s A Group Of Trouts Called?

A group of trout is called a hover.

What’s A Group Of Dolphins Called?

A group of dolphins is called a pod as well.

Final Words: What Is A Group Of Goldfish Called?

A group of goldfish is called a troubling or a glint. Since goldfish don’t school, it’d be slightly incorrect to say a school of goldfish!