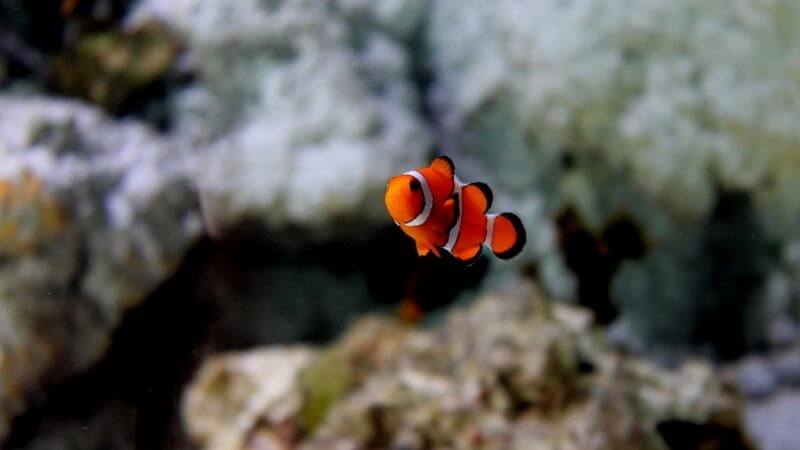 When Finding Nemo was first released in 2003, unassuming little clownfish were pushed into the limelight overnight. The demand for these orange-bodied fish roared so high that it posed a direct threat to their dwindling population in the wild.

And naturally, it was only a matter of time before designer clownfish started making appearances. As of late, a niche market has emerged for aquacultured clownfish with unique – or to put it bluntly, abnormal – traits.

These fish include the naked clownfish, Picasso, clownfish, and the main subject of this blog today – misbar clownfish.

In this article, I’ll tell you all you need to know about misbar clownfish – from the definition and available types to the question of ethics.

So, let’s begin without further ado!

What Is A Misbar Clownfish?

It’s important to note that misbar clownfish aren’t a new or different species of clownfish. To put it simply, they are merely barred clownfish – for example, an ocellaris clownfish with a unique pattern morph.

A clownfish is called a ‘misbar’ when its white bands are incomplete.

Thanks to their one-of-a-kind patterns, misbar clownfish are extremely popular among hobbyists that appreciate unique specimens. The misbarring is perceived to be aesthetically pleasing.

Since every fish will have a somewhat different stripe pattern, they are all unique and individually recognizable.

Naturally, the higher price has led many commercial breeders to selectively breed for the misbar pattern morph. No surprises there.

But some reputable breeders like ORA Farms do not selectively breed misbars – instead, they wait for misbars to occur naturally in aquaculture during larval development.

Thanks to their unusual patterns, they’re pretty popular among hobbyists who have an affinity for unique specimens.

Extreme misbar ocellaris clownfish are quite rare since they have a lot less white in their body than a standard misbar clownfish. Sometimes, they sport only a head bar or a tail dot.

These fish are considered to be among the most beautiful and unique clownfish available in the trade.

Reportedly, extreme misbar patterns are among the least commonly observed stripe mutations. And for that reason precisely, their demand is always so much higher than the supply.

Misbar black ocellaris clownfish are drop-dead gorgeous to begin with. And the misbars only add to their already teeming beauty. These fish usually have an incomplete tail or center stripe and occasionally sport an incomplete head bar.

According to ORA Farms, almost every single spawn of A. ocellaris will yield some “misbarred” juveniles. And they’re entirely unpredictable. Each one contains an original pattern that produces unique individual specimens.

They definitely make one-of-a-kind clownfish. But, even more, they’re by far among the most difficult to produce as there are very few specimens who have these minimal white patterns.

Since each fish is meticulously chosen to qualify as an extreme misbar, their availability is naturally limited.

Like misbar ocellaris, misbar percula clownfish are either missing their caudal stripe or sport an incomplete center stripe. Sometimes, they may come with a missing head bar as well.

And lastly, in typical percula fashion, the black pigmentation develops in their mid-sections as they grow.

Misbar onyx percula clownfish are natives of the reefs of Papua New Guinea. The fish sport classic orange, black, and white coloration. And the white bands are either incomplete or misbarred.

Owing to the unique color gradient and the patterns of the white bands, these fish are definitely a rarity in the hobby.

Thanks to this unique feature, they’re highly sought after by saltwater hobbyists.

Misbar blood orange clownfish are just as exciting as their name. These fish are an intergeneric hybrid between ocellaris and maroon clownfish. Therefore, this blessed variety displays only the best features from each parent species.

These fish sport the same bright red coloration and stunning finnage as the regular blood-orange clowns but with incomplete caudal and center stripes or broken head bars.

Misbar caramel orange clownfish is a unique color variant of the more common black and white ocellaris clowns. The fish has a very distinctive appearance with a warm caramel-colored body and 3 white stripes on each side.

And naturally, the fish has one or multiple broken stripes or bars that don’t connect around the entire body.

They have one or more incomplete bands and long, flowy fins.

What I like the best about these fish is their orange-brown coloration reminiscent of freshly brewed sun tea or coffee. The fish develop jet-black colors as they mature.

Misbar clownfish aren’t a different breed altogether. They’re your regular clownfish who happen to have slightly different patterns and coloration. Therefore, a misbar clownfish’s behavior is the same as that of the original species.

All varieties of misbar ocellaris and percula clownfish are peaceful fish. At worst, they can be semi-aggressive. They are definitely not as short-tempered as tomato or pink skunk clownfish.

But staying true to the typical clownfish style, all misbar clownfish are territorial, just like the original species. Whether wild-caught or tank-bred, they form a symbiotic relationship with anemones in the tank if given a chance.

Is Nemo A Misbar Clownfish?

No, Nemo isn’t a misbar clownfish since all the lines in his body are complete, as you can see in the picture below.

Altogether, he has 3 white bands. The first one runs right behind the eyes, the second one runs across the mid-body vertically, and the third bar is positioned right at the base of the tail fin.

The Question Of Ethics

There’s a polarized debate among aquarists about the ethics behind selectively breeding fish with the motive of cultivating a specific ‘abnormality.’

The debate heats up even more when aggressive and inhumane breeding techniques, like chemically treating eggs, forcing unrelated species to crossbreed, and altering the water parameters, are employed.

Luckily, in misbar clownfish’s case, there’s not much serious ethical debate. That’s because misbarring happens in the wild more commonly than we realize without utilizing any aggressive selective breeding methods.

Final Words: What Is A Misbar Clownfish?

Misbar clownfish are not a separate species. They’re just your regular clownfish specimens who happen to have incomplete or missing white bands.

Depending on the severity of the pattern morph, misbar clownfish are often categorized into two categories: standard misbar and extreme misbar.

Extreme misbar clownfish are way rarer than their standard counterparts.