What Is The Best Guppy Male To Female Ratio? Don’t Make These Mistakes 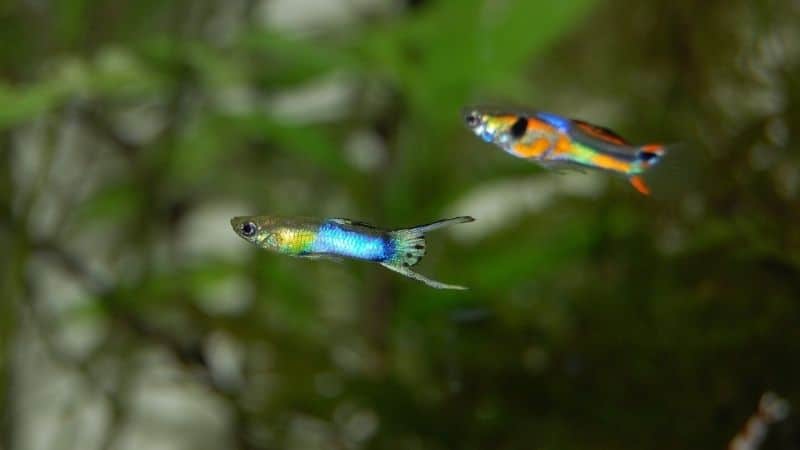 Guppies are often hailed as beginner fish due to their low-maintenance needs. While that’s true for most parts, there are some things you need to consider. For instance, what is the best guppy male to female ratio?

What Is The Best Guppy Male To Female Ratio?

Derived from the general practice among fish keepers, the most suitable guppy male to female ratio is 1:3. Thus, for every male guppy, there should be at least three females. However, many people also go by a 1:2 ratio.

As the tank’s population increases, you can multiply the ratio of male guppies to female guppies.

For example, if you are going by the 1:3 ratio:

You must maintain the right guppy male to female ratio in the tank.

Otherwise, the situation can turn grotesque quickly with a handful of stressed and injured fish.

Keep reading to know more about the dos and don’ts of maintaining the ideal guppy population in your fish tank.

Housing the right numbers of males and females may seem unimportant at first glance. But the consequences of neglecting this aspect can come at the cost of life. It can lead to increased aggression among males, stressed-out females, and overpopulation. In turn, overpopulation will pollute the tank more often.

Guppies are social fish that usually swim in shoals. But they also have complex, hierarchical dynamics among themselves. It’s not unusual for males to fight over territory or potential mates.

Usually, juvenile or petite male guppies bear the brunt of all the fights.

When male guppies outnumber females, there’s bound to territorial aggression and mating frustration, which they’ll take out on each other.

There’s only one outcome—injured guppies with torn fins.

Guppy males try hard to woo a female counterpart. They’ll put on a show, display sleekest moves, and of course, show off their beautiful spots.

If that doesn’t work, they don’t mind chasing and bullying females for forced coercion either.

This will seriously stress out female guppies.

If there’s one thing guppies seriously excel at, it’s reproduction. All guppy owners are often faced with the dilemma of what to do with all the fry.

Suppose the guppy male to female ratio is similar. In that case, there’ll be prolific reproduction, a handful of pregnant guppies, and an overwhelming number of fry.

And an overpopulated tank is never good. It’ll get rid of the good bacteria and spike levels of gasses like ammonia and nitrite.

If not addressed in time, these gases can have deadly impacts on guppies.

Can I Add Only Male Guppies In Tank?

Often times, people only keep male guppies in one tank as they’re clearly more aesthetic than females. However, there are a few cons. For instance, there’s an elevated risk of territorial or general aggression among male guppies.

On top of that, there won’t be any female partner to mate with. This can stress out your male guppies more and cause fights.

There will be a lot of casualties as biting and nipping will be everyday activities.

If you have a fewer number of guppies, the situation can get even worse. Usually, the bigger and dominant guppy will always bully petite friends.

So, to answer, yes, male guppies can live with each other without the females’ presence. However, in my opinion, that’s not quite fair for them.

Here’s an in-depth article on the science behind male guppies fighting.

While researching for this blog, I came across interesting scientific research, so I couldn’t keep myself from sharing. It was discovered by the scientists of the University of St. Andrews.

Female guppies, living in a tank where females outnumber males, give birth to sizeable male offspring. On the other hand, the effects were opposite for females coming from a male-dominated area.

Larger male guppies, of course, have reproductive advantages in the environment where females outnumber males.

The scientists believe that females can adjust their brood’s sex ratio in relation to the prevailing environmental conditions—specifically the operational sex ratio.

Male Guppies Can Cause Fight Among The Female Population

Here’s another bit of interesting information before you go.

If male guppies outstrip females, a lot of the female population will be chased around and bullied. And as it turns out, females living in such conditions can lash out at each other and pick up fights without any substantial causes.

That’s the case of mismatched aggression. Female guppies will often take out their frustration over a harassing male on a fellow female.

There will be quite a bit of nipping, nudging, and chasing going around.

How To Tell A Male Guppy From A Female?

Male guppies are way too colorful than females, with shimmery blue, orange, and black spots. Females are relatively inconspicuous and come in duller shades of gray and brown. Likewise, a female is bigger in terms of size and has a curvier body time. Whereas male guppies are more slender.

And lastly, gravid spot, a dark spot positioned near the guppy’s tail, is only present in female guppies. If the females get impregnated, the gravid spot will grow larger and darker.

Anyone who’s a teeny bit of experience in fishkeeping can easily differentiate a male guppy from a female.

Yes, guppies can live alone. The prevalent rule is keeping one guppy per 2 gallons of water. However, guppies are innately social fish that love to live in a group. So, a guppy kept alone can become jaded and stressed quite easily. Especially if you’re keeping it in a bowl.

Since guppies have a high reproductive drive, sexual frustration can also fuel the stress in a lonely guppy.

The ideal guppy male to female ratio is 1:3. Suppose you have a higher number of guppies. In that case, you can simply multiply the ratio—for instance, 5 males for 15 females and 10 males for 30 females.

If the ratio of guppy male to female is not matched, it can lead to an overpopulated tank, fights, territorial frustration, and mating aggression. That, in turn, will lead to heightened stress and fights among the inhabitants.