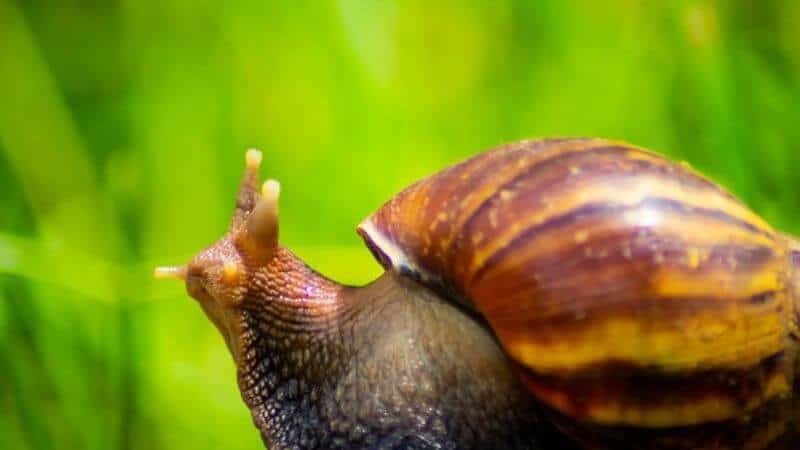 The United States has some bizarre rules on animal adoption. And, let’s admit, we all feel constricted when our state laws don’t allow us to keep certain animals as pets. And yes, regulations for keeping snails fall under no exception.

So, without further ado, let’s discuss what snails are legal in the US.

Disclaimer: The information was gathered from both official and hearsay sources. So, please check with your local law authorities before getting the particular snail species.

What Snails Are Legal In The US?

Most native snails not listed under the IUCN list are legal in the US. In addition, compared to terrestrial snails, most freshwater snails can be legally kept as pets. And as for frozen and edible snails, they, too, are completely legal.

However, importing or keeping some species of terrestrial snails like the giant African snail can land you in legal trouble. This is because they pose a threat to both humans and plants.

A little background on why giant African snails were made illegal.

It is said that a boy from Miami first brought African snails from Hawaii. After they bred rapidly, his grandmother released them into her garden.

The rapid breeding rate of these giant snails meant farms and vegetation were raided in no time. Since these snails are one of the largest of their kind and new to US soil, there were no natural predators to annihilate them.

They quickly overran all of Florida. So, the USDA had to take prompt action to stop this rampage. But unfortunately, it took more than 10 years for them to eradicate these pesky snails, causing millions of losses for farmers. So, now you know why regulations were imposed on bringing giant African snails.

And if you happen to have a giant African snail in possession inside US territory, it will be confiscated.

Compared to terrestrial snails, aquatic snails aren’t put under scrutiny by law enforcers. This is because these snails need favorable conditions – thus, they must be confined inside a tank. This makes them less threatening.

Also, laws in the US don’t really favor snail keepers who like to keep land snails as pets.

This explains why many hobbyists don’t want the hassle of keeping terrestrial snails and end up petting aquatic snails.

Which Land Snails Are Illegal In The US?

Here’s a list of land snails that are illegal in most states in the US:

Most of the above-listed snails are under the prohibited category as they are considered a threat as invasive species.

However, some species like the Florida tree snail, which fall under endangered species, require a special permit to be raised in captivity.

Let me tell you another interesting law regarding the import of snails.

Some states like New Jersey prohibit importing any snail species from Africa.

Are Water Snails Illegal In The US?

Every state has its own set of unique laws concerning animals and the environment. For example, the state of Oregon demands prohibited species permits to keep Chinese and Japanese mystery snails. However, apart from a few exceptions like Oregon, most states allow keeping water snails as pets.

Which Water Snails Are Illegal In The US?

Depending on the state, some water snail species are illegal in the US. For example, New Zealand mud snail, Chinese mystery snail, and Japanese mystery snail are unlawful in some states in the US. It could be due to their notoriety for consuming a significant amount of algae, leaving little to no food for native aquatic invertebrates.

Why Are Some Snail Species Illegal In The US?

The most common reason behind making some snail species illegal is their invasive attributes. Also, endangered snail species are made illegal to be hunted or kept as pets to keep their numbers in check. The legality of these species differs from state to state.

Are Roman Snails Legal In The US?

Roman snail, also known as the Burgundy snail, is an edible snail that is legal to consume in the US. Although there are restrictions on importing these snails for breeding purposes, the USDA does facilitate importing of these snails through an issue of a certified license. Therefore, it can be said that these importing regulations do fall under a gray area.

There are farms in the US where these escargots are commercially farmed. But still, you need to check with your state’s animal officials to confirm if you want to raise them as pets.

Is It Illegal To Ship Snails?

Yes, it is illegal to ship live snails into the US. However, you can import frozen snails for consumption. Unfortunately, states like New Jersey don’t allow any snail species from Africa.

How Do I Ship Snails?

Here are the step-by-step instructions for shipping snails:

Are Milk Snails Illegal In The US?

Milk snails (otala lactea) are illegal in the US. They are labeled invasive species, so transferring them from one state to another is not permitted.

Are Helix Snails Legal In The US?

No, helix snails aren’t legal in the US. They are banned in most states due to their resilient invasive characteristics.

Can You Sell Live Snails?

Yes, you can sell live snails only after checking the legality issues of that particular species. Usually, most water snails are legal to be sold in many states in the US. However, the same cannot be said for terrestrial snails like a helix.

Can You Release Baby Snails?

No, you shouldn’t release baby snails in the wild. It could be an invasive species. Instead, contact local animal law enforcement to know if they are okay with it.

Snails are considered one of the most invasive species all around the globe. Compared to aquatic snails, terrestrial ones can wreak havoc if released into the wild, which is why many of them are labeled illegal in the US.

Species like a helix and giant African snail are illegal to own, release, or be sold in most states. However, it is legal to keep aquatic snails as pets.

Unlike terrestrial and pond snails, aquatic snails are raised and kept in a confined tank, making them less dangerous than terrestrial snails.

So, before raising snails in captivity, check with local authorities to know if it is legal to keep them or not.