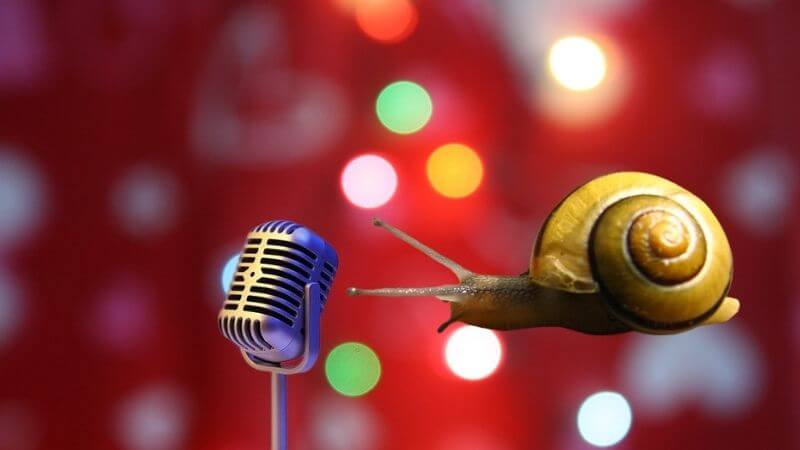 There have been instances of hobbyists reporting their snails producing all kinds of sound. But you might have heard that mollusks lack vocal cords. So, are they lying? Is it all in their head?

But before advising our fellow snail-keepers to get their ears checked, let’s confirm whether snails can really produce sound or not. And if they do, what kind of noise is it?

What Sound Does A Snail Make?

Most animals and insects produce sounds to find prospective mates or when they are in danger. But snails do not fall under that category. The sound you hear coming from a snail tank could be a snail eating or retracting back to its shell. These are cues, not sounds they produce.

When the snails are eating, you will hear a crunching sound. And when it is retracting, the air bubble present inside the shell will release, making a whooshing sound.

Also, when your snail is crawling over a dry glass, you will hear a singing sound similar to the one produced when you rub your finger on a wine glass.

Although the general notion is that snails do not produce sounds, there have been cases where researchers accidentally encountered snails yelping.

Researcher G.Woehl and a colleague were collecting amphibians in the Araucaria forest in Brazil when they found a snail emitting a squealing sound from behind foliage.

The snail had a damaged shell and seemed to have just been attacked by a predator. In addition, orange mucus and foam were observed all over its body, which is a common defensive mechanism in snails.

So, they immediately recorded the sound the snail produced with a Sony voice recorder and analyzed it.

Upon analyzing, it was revealed that the sound lasted 241 ms and had two different pulses with an interval of 131 ms. Both the pulses had a regular harmonic structure.

Here’s the link for the audio:

However, it is still a mystery how the snail produced the sound. Was it able to compress its pulmonary cavity, or did it use other means? Only time will tell.

Snails cannot produce sound because they do not have the appropriate genetic material or developmental infrastructure in their body to make sounds.

But that is not all. There should be a reason behind a creature to produce sound.

Animals and insects produce sounds to communicate and attract mates. Evolution experts believe this is why most creatures on the planet developed vocal prowess.

But why were snails (mollusks) bereft of this quintessential ability?

A plausible explanation would be that snails release their sperm into the water and reproduce externally. And when another snail comes in contact with the prostatic fluid, fertilization occurs.

So, unlike a brown thrasher, a snail never had to woo its mates by singing. This explains why they never developed vocal aptitude in the first place.

Snails have developed olfactory organs, but they have no sense of hearing. Other species in the gastropod family cannot hear, too. Sorry to burst your bubble. I know it’s disappointing that your pet friend cannot hear when you call them by their name.

But how come it feels like they are responding to your calls?

Sound is simply a by-product of mechanical movement, converted into chemical signals by our brain.

Just like how the hair cells in the cochlea sense these sound waves, the sensory cells in their tentacles can detect vibration.

So, your snail will be able to know that the sound wave coming from your vocal chord is you by detecting the vibration.

What Is The Sound Of Snail Called?

There’s no definitive word for a snail’s sound because they cannot produce one. However, the activities it conducts could make distinct sounds.

For instance, a snail crawling on the glass will make a squeaky sound, and when they munch on their favorite food, they produce a crunching sound.

No, snails do not hiss. Animals hiss when they want to repel attackers. In the case of snails, they will retract back to their shell when they sense danger.

No, snails do not cry like humans or some mammals do. However, snails need to constantly hydrate themselves, so they will be weeping fluids at all times. This can give you a false impression that your snail is crying.

Why Is My Snail Coughing?

Producing vocal sounds and coughing are two different things. So, you might think that your snail is coughing. But the coughing sound you hear could be the sound of a snail pooping. When they excrete, there’s this thumping rumble that you can hear if you listen closely.

Final Words: What Sound Does A Snail Make?

Mollusks do not make sounds. There was never the need.

Most animals produce sound in search of prospective mates.

On the other hand, snails reproduce externally. It might come as a surprise, but did you know that some species of snails shoot love darts to impregnate the females? Lucky bastards!

So, on the grounds of this, you can deduce why snails never had to develop acoustical talent to fight off other males.