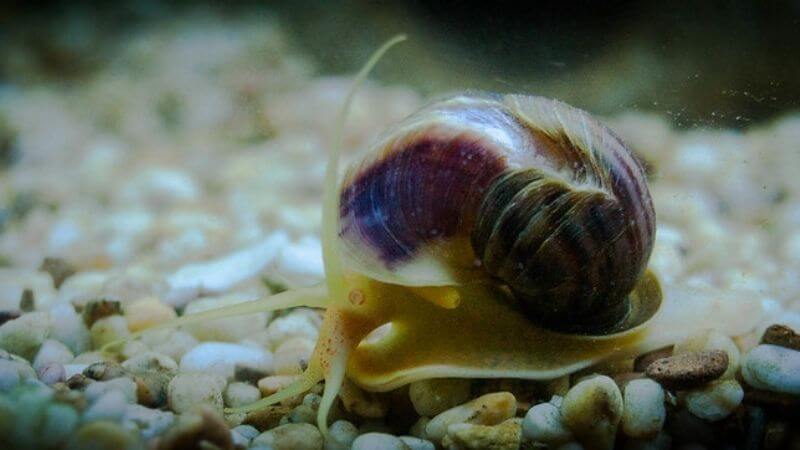 I’d like to start with a quote from the great Benjamin Franklin: Nothing is certain except death and taxes.

No matter how lovingly we raise our pets, they will have to leave us someday. And when that day comes, we have to do our part by honoring them.

However, when it comes to the death of aquatic pets, not many shed tears or take the necessary actions to get rid of their remains.

So, what is the right way to deal if there’s a dead snail in your tank?

If you are faced with this dilemma, this post will guide you through the step-by-step process of what to do with a dead snail.

What To Do With A Dead Snail?

Some hobbyists leave them be and let other residents and critters devour the corpse. But if that hasn’t happened with your dead snail, you need to take the dead snail out, put it in a zip-lock bag, and dispose of it safely.

Now, let me tell you how to get rid of a dead snail in a tank.

If the dead snail hasn’t yet become a meal for any residents in the tank, you have to take it out.

A decomposing snail will only release large amounts of ammonia, which fuels the tank’s nitrogen cycle and makes the aquarium inhospitable.

So, if it has already been 2 days, and no scavengers have taken any interest in eating the corpse, you should immediately take it out before it becomes any more toxic to other residents.

Here’s how you dispose of a dead snail:

Use The Service Of Your Cleaning Crew

Snails make an excellent cleaning crew. And when there’s a dead snail in the tank, it is most likely that they will be the first ones to devour it.

For example, some species like mystery snails and bumblebee bee snails feed on both dying and dead snails.

There’s no need for you to be biased and include only snails in that crew. Shrimps and hermits can also become great additions to this party. They, too, will readily feast on dead snails.

Remove Corpse Only From Shell

In contrast to the two aforementioned methods, this approach is more about honoring your dead snail. You can remove and get rid of the body and keep the shell as a memento.

Or, you can keep it as decor in the same tank. I have my hermits making a home out of it.

Here’s how you can remove a snail’s body from its shell:

There could be some remains that didn’t come out in the first attempt. So, use Q-tips to clean the out-of-reach corners inside the shell.

Now that you know what to do with a dead snail, you should make sure it is really dead before you go ahead with the funeral procession.

You should know how to distinguish between a sleeping and a dead snail.

Snails sleep for long periods. Some snails are known to sleep for over 3 years in the wild. So, it is necessary to identify if a snail is sleeping or dead.

How To Tell If A Snail Is Sleeping?

A sleeping snail will show the following signs:

How To Tell If A Snail Is Dead?

Here are some signs to tell if a snail is dead:

What To Do With Dead Eggs Of A Snail?

To get rid of the dead eggs, you can scrape them off using a razor blade. Make sure the blade is stainless. You need to carefully scrape the eggs from the surface. Pick up the grated eggs with a spoon and remove them from the tank.

Sometimes, the eggs in the clutch you presumed to be dead might have some survivors. This is why I think throwing the eggs down the kitchen drain is a bad idea. These eggs can hatch, and you will find hordes of them attached to pipes and drains.

Therefore, you need to put these eggs in a zip-lock bag and keep them in the refrigerator. Then, wait till garbage day before you take them out.

Not all eggs hatch in the tank. For instance, eggs laid by a nerite snail in a freshwater tank will not hatch because they need brackish water.

Even more, they do not lay eggs in clutches like the other snails.

They disperse their eggs all over the tank, especially on the driftwoods, where they hang around a lot.

It can be time-consuming to remove these eggs because you can only scrape them one at a time.

Unlike most aquarium snails, nerite snails aren’t hermaphrodites, which means their gender is differentiated, and they cannot reproduce independently.

So, keeping males only is a preventive solution to control the snail population in a tank.

How Long Do Snails Live?

Depending on the species, captive snails can live anywhere from 1 to 10 years. Also, factors like water, habitat, diet, and tankmates play a role in extending or reducing their lifespan.

Here’s a list of some popular snails and their lifespan:

Final Words: What To Do With A Dead Snail

Most hobbyists employ snails as cleaning crew members in their tanks. So, even if one of your snails dies, it is distinctly possible that other snails will come and eat it.

But if your other snails aren’t interested in feeding on the corpse somehow, it is time for human intervention.

A decomposing snail can spike up the ammonia levels, making the tank uninhabitable for other lodgers.

If it has already been 48 hours since the casualty and the snail is still lying there untouched, you should take it out immediately before it starts smelling.